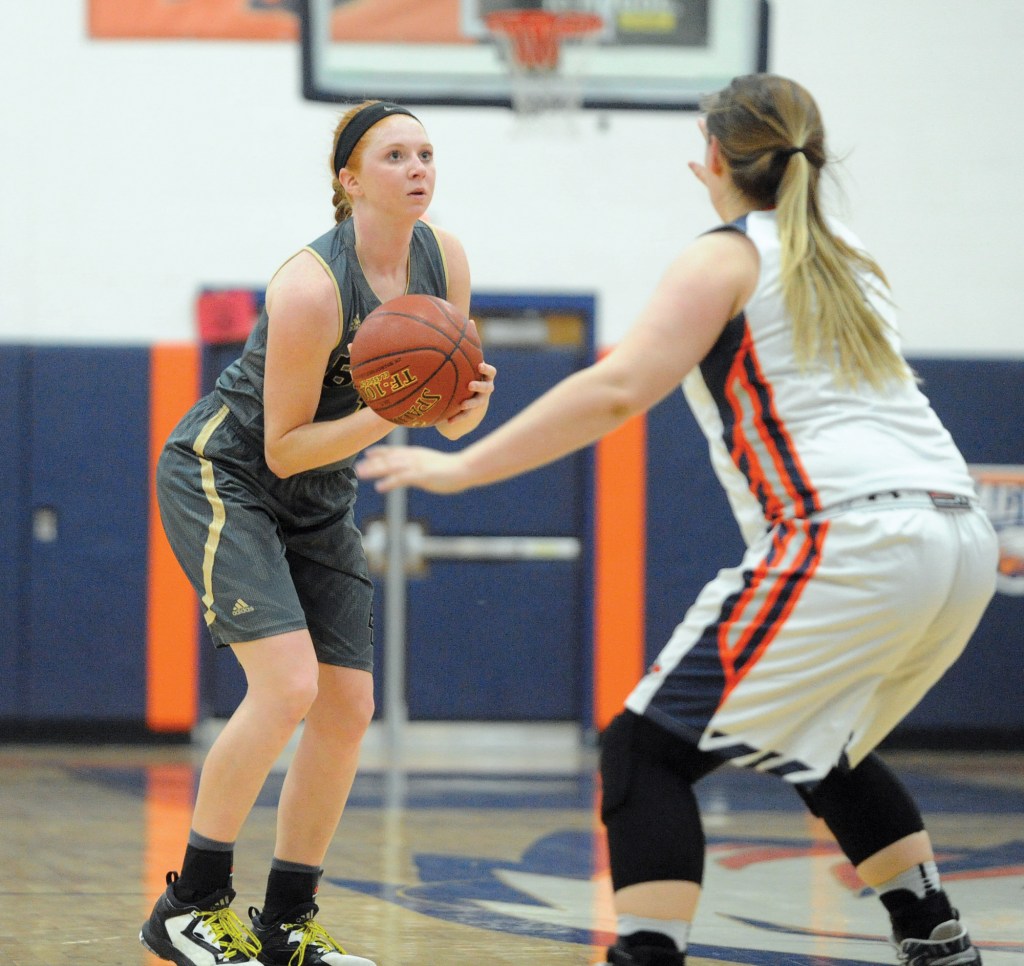 Matt Overing/matthew.overing@amnews.com Emmie Harris broke the school record for points in a career on Tuesday, Feb. 14 at Madison Southern. She broke the record with a 3-point basket in the first quarter and finished with 34 points in the game.

BEREA — Emmie Harris needed 11 points against Madison Southern to take the No. 1 spot on the all-time scoring list at Boyle County.

She scored 13 points in the first quarter, breaking the record with a 3-point shot with less than a minute left in the quarter. Harris scored a game-high 34 points as the Rebels cruised to a 70-53 win.

Harris has scored 2,375 points in her career, and how she’s gotten those points is what has impressed coach Greg Edwards.

“It just speaks to how good she has been for so long here in this program,” he said. “Going all the way back to when she played a little bit as a seventh grader. As an eighth grader she stepped up and started really contributing more. As a freshman, you could just see that from her freshman year on, she was going to put the work in to make herself a good ball player. Her work ethic is just unquestionable and the will to win, the will to take games over, I’m just really proud of her. The record speaks well of her and it speaks well of her teammates. You lose sight of that sometimes but she’s had a lot of help along the way.”

Harris was also quick to thank her teammates for helping her to the top spot in the Boyle record books and for a win Tuesday.

“I couldn’t do any of this without them,” Harris said. “They are big supporters and they are impact players on our team.”

Danielle Roney had 12 points, McKayla Baker scored 10 points and Becca Tarter had a team-high 10 rebounds for the Rebels. Madison Southern jumped out to a 7-2 lead but Harris went on a 5-0 run to tie the game, and the Rebels didn’t look back. Boyle led 17-12 after one quarter and 38-21 at halftime.

“It’s a good win for us, we’ve been playing some really good basketball recently, just trying to build on the things that we’ve done successfully here in the last month,” Edwards said. “At some point, we knew the tough schedule that we played was going to pay off. We’re starting to reap some of that, and it’s because the girls have bought in to what works and the things that we do well. They’ve done a good job honing in on those things and eliminating the things we don’t do well.”

Harris visited Utah State over the weekend and said her focus wasn’t on the record, just helping the team get a win.

“I was kind of jet lagged today after getting back from my trip, but it was just about pushing through it,” she said. “I was focused on winning and I’m glad we got the win. I think we played really well, played together. We had really good defense and turned it into offense.”

She contributed eight steals, nine deflections and five rebounds in the win.

“I feel like when I’m out playing a good defensive game, it helps me transition to offense,” Harris said. “I’ve got pretty good length for my size, so when I get deflections and steals, it helps out a lot and helps us transition.”

Edwards said her versatility was on full display Tuesday. She had three 3-point makes and had 10 foul shots.

“She can score in a lot of different ways,” he said. “When her shot is on, she’s hard to stop.”

With two games left in the regular season, Harris said she’s excited to turn her focus to making the region tournament. Edwards said he wants his team, winners of four out of its last five games, to continue to finish strong.

“We had good wins last week, this is a good win to get this week started,” the coach said. “We have a couple games left to end the season, finish it in a good way and get ready for the district.”