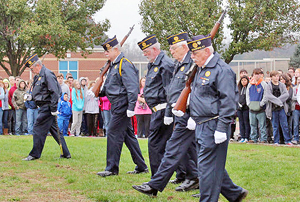 The Boyle County Fiscal Court has agreed to help replace one of the honor guard rifles stolen recently from the Stanford American Legion.

Magistrates voted unanimously Tuesday to pay about $850 to purchase a rifle from a company in Alabama.

Magistrate Jack Hendricks said while American Legion Post 18 operates out of Stanford, he is a member of its Honor Guard, which provides military honors for around 120 veterans’ funerals every year, many of which are held in Boyle County.

“There’s a lot of us that would like to get our hands on whoever stole them,” Hendricks said concerning the recent theft of seven M1 Garand rifles used by the post for military honors. “But at any rate, the sheriff’s working on that over there diligently. We have recovered one. I’m not sure about what’s going to happen with the others.”

Hendricks said Lincoln County residents have managed to raise a little more than $4,000 so far to replace the rifles. An Alabama company has agreed to sell the American Legion eight rifles at about $850 per rifle — a large discount from the list price of “$1,500-$1,800,” Hendricks said. The total cost for the order would be around $6,800.

The Lincoln County Fiscal Court is expected to provide funding for two of those rifles, Hendricks said.

“Being a member of the Honor Guard, I don’t want to ask the court,” Hendricks said. “But I’m hoping that everybody will step up and say, ‘OK, we’d like to replace maybe one of those rifles, which would be around $850.”

Magistrate John Caywood made a motion to pay for one rifle out of the county’s “miscellaneous” line item. Magistrate Phil Sammons seconded the motion and it passed unanimously.

According to Lincoln County Sheriff Curt Folger, the rifles were stolen sometime between Jan. 12 and Jan. 16 out of a vehicle at the residence of one of the American Legion’s commanders. The rifles are valued at $1,000 each, Folger has said.

American Legion Post 18 has offered a $1,000 reward for the arrest and conviction of the responsible parties.

Let the music move you — to the Perryville…