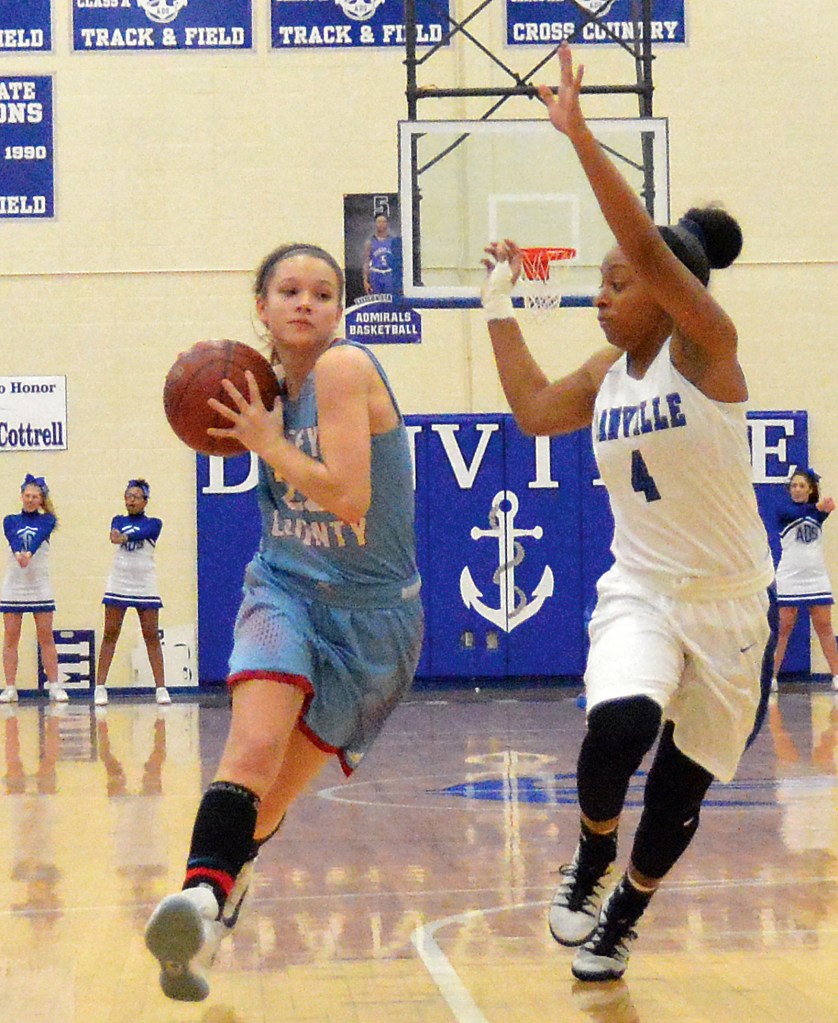 Jeremy Schneider/jeremy.schneider@amnews.com Gena Cravens of Casey County drives to the lane against Danville's Zenoviah Walker during Thursday's game in Danville.

When Tara Weddle played for coach Randy Salyers at Casey County, one of his team goals was always to reach 20-plus wins each season.

In her first year as the head coach at her alma mater, Weddle has carried over that goal from her playing days, and Thursday night at Danville, the Rebels checked it off the list.

Casey gained a measure of momentum heading into next week’s district tournament with a 48-43 win at Danville. It was the Rebels second win in their last six games and moved their record to 20-8 this season.

“To get 20 wins in the regular season, it’s huge,” Weddle said. “I’m extremely happy about it. I’m happy for the girls more than anything else.”

The last seven games of Casey’s season definitely represents the meat of its schedule. The Rebels opponents have a combined 123-65 record (65.4 percent), and only Woodford County has a losing record. They host Lincoln County in the regular season finale tonight.

So the win over the Admirals (18-8) was a huge boost for the Rebels, especially for a young team to learn how to win a close game.

“The last three losses have been down to the wire, similar to this game,” Weddle said. “We play four freshmen most of the time, so some of that is our youth not knowing how to handle a close situation.

“To beat a team like Danville is huge because they were 13-1 in the (12th Region) coming into tonight. I was here Tuesday night and watched them put up 70-some points. To hold them to 43, I think the girls did really well defensively.”

On the other bench, coach Michael Menifee watched as his players sleepwalked through the first 16 minutes of the game, going down 18-11 at halftime — after scoring four points in the second quarter — and 21-11 early in the second half.

“We weren’t checked in tonight, and when you’re not focused and don’t find a rhythm, everything seems like it’s against you when you’re partly to blame for most of it,” Menifee said. “I hate to lose, but we’re kind of the same spot we were in last year. We lost to Somerset after winning five or six in a row. I said, ‘Let’s throw that out the window, regroup and refocus for the district.’”

Weddle had her team focused on stopping Danville’s transition offense which stymied the Ads ability to rally for quick bursts of points. And on offense, she was pleased to see her team drive into the paint and not settle for so many 3-pointers.

The Ads responded in the third quarter, trading the lead with Casey over the last two minutes, but Menifee knew his players were already focused on next week’s 45th District tournament.

“By that time, the game itself had snowballed on us,” Menifee said.

The Rebels held a 29-28 lead entering the fourth, and apart from a Gena Cravens field goal and a Myla McGowan 3-pointer, they made their living at the free throw line, connecting on 14-of-16 from the stripe in the quarter.

For the game, Danville attempted only 11 free throws, making five. Casey went 21-of-25 from the line.

“We shoot free throws all the time in practice,” Weddle said. “There’s not one free throw they shoot that they don’t have to run for if they miss it. We take free throws very seriously.”

Menifee said, “That in itself is kind of telltale for the game. … You think the ref was against you, but I told them, ‘You’re not getting in front of people, you’re fouling.’”

Ivy Turner and Alyvia Walker each scored 13 points to lead the Ads. Walker had nine points in the fourth quarter, going 4-of-6 from the free throw line.

With their next game not until Tuesday, the Ads will have four days off in between. Menifee said the team will be right back to practice Friday.

“Just how we would normally do if we had another week of games, which we do,” Menifee said. “There’s no reason to take time off and relax because we have a big prize. This game Tuesday is one-shot-or-you’re-done.”

Lauren Lee had 17 points to pace Casey. Natalie Duggins went 6-of-6 from the line in the fourth quarter to finish with eight points, and Cravens had nine.