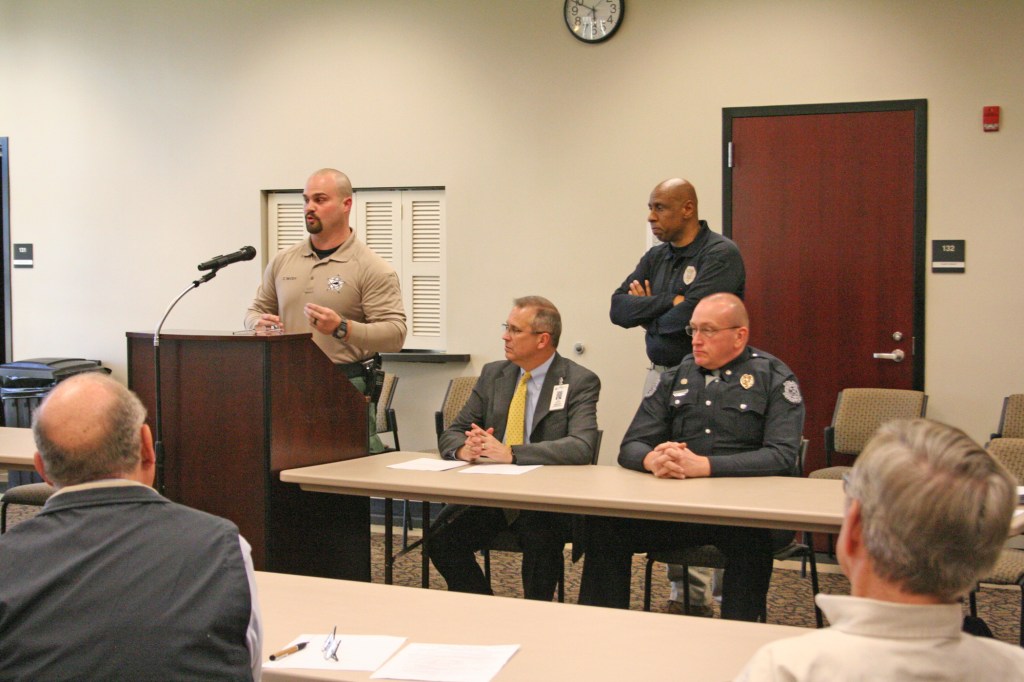 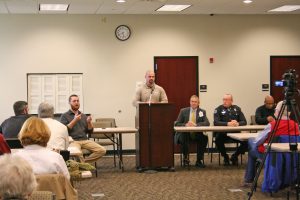 About 25 people came out for the Law Enforcement/Community Relations Forum Thursday night at the InterCounty Energy building on Hustonville Road.

It was the second of the forums held since Danville Police Chief Tony Gray took his position about four years ago — but this time the Boyle County Sheriff’s Department joined the event, which was sponsored by the Boyle County Task Force of the Safe Communities Coalition of Central Kentucky.

“We’ll try to do this again, more frequently than the last time,” Gray said, starting the meeting off, reading the department’s mission statement. “We’re here to interact with the community to identify and address public safety and quality of life issues.”

Gray was joined by Asst. Chief Robert Estill. Sheriff Derek Robbins was absent, having been delayed after going out of town to pick out the department’s newest K9. K9 Officer Casey McCoy filled in, joined by Deputy Keith Addison.

“Sheriff Robbins really wanted to be here to do this today,” McCoy said. “We really want to know what we can do to be better for the community.”

Community members had the opportunity to ask questions of Gray and McCoy, focusing largely on what the departments needed, as well as what the community could do to help.

Drugs were the number one topic of conversation. 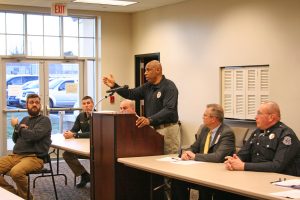 The men encouraged community members to speak up when they saw something suspicious.

“If you see something, say something,” Gray said. “Report any and all drug activity to us or the sheriff’s department. We’re getting better at sharing information with each other.”

“Make the call right away,” McCoy said. “Sometimes people wait 15 minutes before they call — if you call when you see it happen, we might be able to get there in time to see it, to follow the car … the sooner, the better.”

McCoy also said they have a growing abundance of drug cases to deal with.

“As of today, we have 65 felony cases already for year 2017; 58 of them are drug-related. This is not a new problem, it’s always been a problem. It’s always, unfortunately, going to be a problem,” McCoy said.

They make every effort to deter the drug dealers, and K9 NiKi is a big asset to that, McCoy said.

“I know we try different methods. One will work really well, then they catch on to that,” he said. “It’s not a game, but to them it’s a game.”

He said the city and county were beginning to see more crystal methamphetamine, compared to heroin.

“We do feel like we’re making a dent,” McCoy said.

To help combat drugs and other growing issues, both the Boyle County Sheriff’s Department and the Danville Police Department have joined the Bluegrass and Central Kentucky Unified Police Protection System, or BACKUPPS. There are about 25 other agencies as part of the system, including Garrard County and Mercer County, Gray said.

“BACKUPPS is starting to have a good effect on the drug problem,” he said. 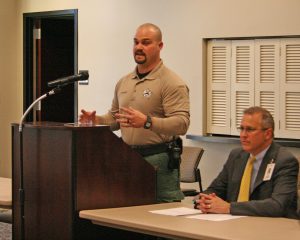 BACKUPPS allows the departments to cross county lines if they are following a case, as long as they notify that department.

“It’s all one big problem … it’s not ours and theirs,” McCoy said.

Staffing is also one of the biggest issues facing the respective departments.

A year ago, the department was short five people. While they’ve hired new ones, there have been other officers leave, leaving the department still short four officers. There are new recruits in the academy now and more to start in May.

“But those people are six or seven months away from being on their own,” Gray said.

Gray said he generally has five officers on each shift, covering different sectors of the city, along with two shift captains, to provide secondary support when needed.

“So often, calls are two person calls now,” he said.

McCoy said there were times when there were one to two deputies on at a time, and that they stagger shifts to expand their coverage capabilities.

“We do patrol, but it’s hard to be everywhere at once,” he said.

Stephanie Blevins, with the Safe Communities Coalition of Central Kentucky, asked if there was something the community could do to help with that.

Gray explained that the biggest hang up on staffing is the money — it costs about $100,000 per officer, between pay, insurance, outfitting, equipment and more. Officers don’t make that much, he said; a newly certified officer comes in at about $30,000 to the Danville department.

Gray said they would love to have extra officers to have two or three SROs for the Danville Schools, and his conversations with Robbins proved he had the same wish for the Boyle County Schools.

Gray and the others thanked everyone for their interactions with the department on social media.

“The comments are a good thing,” said Addison.

Gray said he was looking to putting a map together to post on there of where the trends were for a week, such as if break-ins occurring in one section of the community, but they haven’t yet been able to pick that up.

Community members also asked about training for officers on how to deal with those with special needs. It’s not something officers get in great depth, Gray said, but they do receive some before leaving the academy. McCoy said they also have the option to take that training when they go for their 40 hours of yearly inservice trainings, among several other choices.

Gray also fielded questions about neighborhood watch programs, which he said have gone away more since the situation with George Zimmerman and Treyvon Martin several years ago.

Instead, he reiterated, “if you see something, say something.”