Parks and Rec. budget to potentially include pay increase 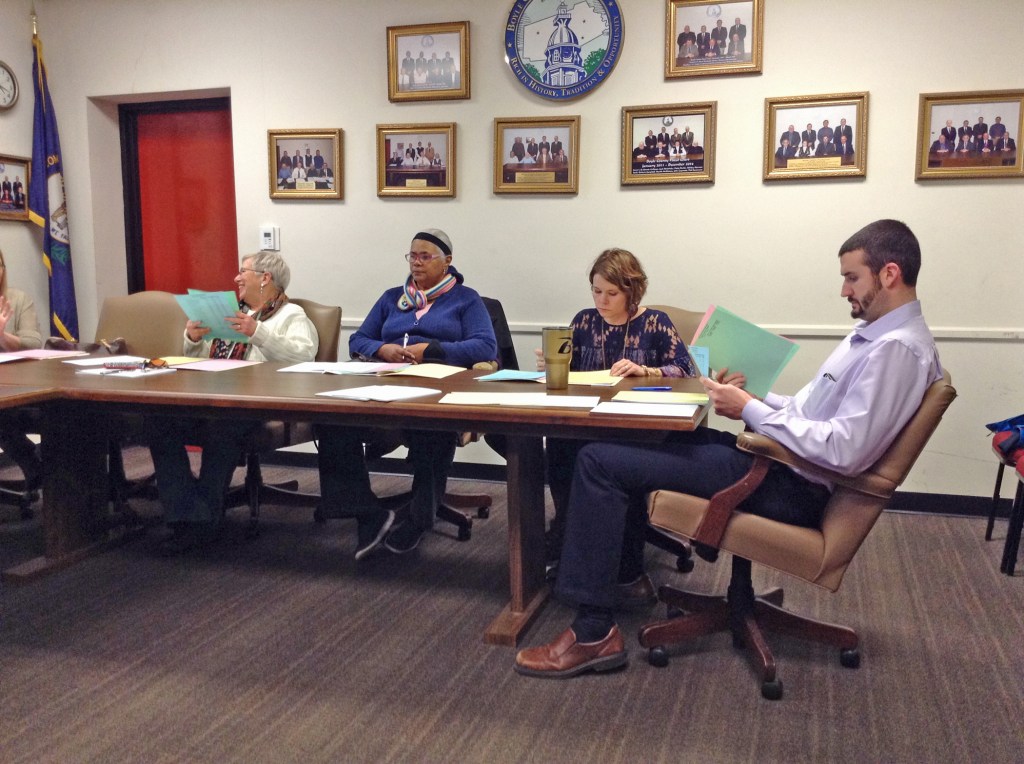 Kendra Peek/kendra.peek@amnews.com Members of the Parks and Recreation board look over the monthly bills during Wednesday's meeting.

“We need to put it in the budget. They need to treat parks and rec as they do any other agency in the city or county,” said Roger Ross, chair of the board.

Other members vocalized their agreement.

Drake told the board he “usually” discusses raises after the city and county finishes their budgets, so the department can “see where we are.”

“Every time I put any increase on my top line item, it seems we spend too much time in those meetings talking about that line item and it takes away from the rest of it,” Drake said.

County Treasurer Mary Conley was present at the meeting and agreed with the board. She said having pay increases also helps for future hiring, enabling them to get good candidates and weed out the bad ones. But more than that, she said, “it’s the right thing to do.”

“I have taken your audits and created a spread sheet from year to year to year. I am amazed at the lack of increase in the overall cost of doing business with this board. One of those is the salaries line item. I understand that you have to fight that line item,” Conley said. “I had a magistrate years ago who always said, ‘We have county employees, we have city employees, we have Parks and Rec. employees and we have Planning and Zoning employees. To a certain extent, they’re all our employees and they should all be treated the same.’ I feel the same way.”

Conley said 2.1 percent is the amount that the fiscal court adopted for the county salaries, and is considered a cost of living increase.

Drake plans to present the budget at the next ad hoc meeting between himself, Chairman Ross and officials with the city and county. With the pay increases, he said, the amount being added in the budget from the two government entities would likely be near $189,000, instead of the $185,000 initially expected.

“I can stand in that ad hoc committee and justify this. We have to do this. We have to treat everybody the same,” Ross said. “I want to be sure they treat Parks and Rec as they do any other agency that has employees. We need to make sure that our employees, going forward, are treated as any other employee in the city or county system, that they get proper raises and that we can retain them.”

Conley also suggested that the Parks and Rec budget create a line item for depreciation of equipment. It will include moving $5,000 from the $35,000 maintenance equipment line to a new line just for the depreciation.

“I don’t think you’ll get any kind of grief from the city or county to put $4,000 or $5,000 in a line item for future equipment replacement,” she said. “The worst thing that could happen is that they ask you to take that out.”

Drake said they had a fund to allow for an equipment replacement schedule, but that it was eventually rolled into another area.

Conley said both the city and county have similar items in their budgets.

“If everybody else is doing it, let’s all do it,” she said.

Board members agreed. The budget was approved with the changes to salary and the addition of the depreciation line.

• approved a rate increase for T-Ball from $40 to $45; for baseball and softball from $50 to $55; and kept the $10 off rate for siblings. Scholarships are available in some situations, Drake said.

• discussed the return of rugby competitions in 2017. Drake said the sport was gaining in popularity. It was one not anticipated in the early plans for the park, but is one that needs to be acknowledged moving forward.

• approved a cost of living increase for umpires.