Seeing it from all sides: Physicians, attorneys provide ‘variety of perspectives’ about the state of health care 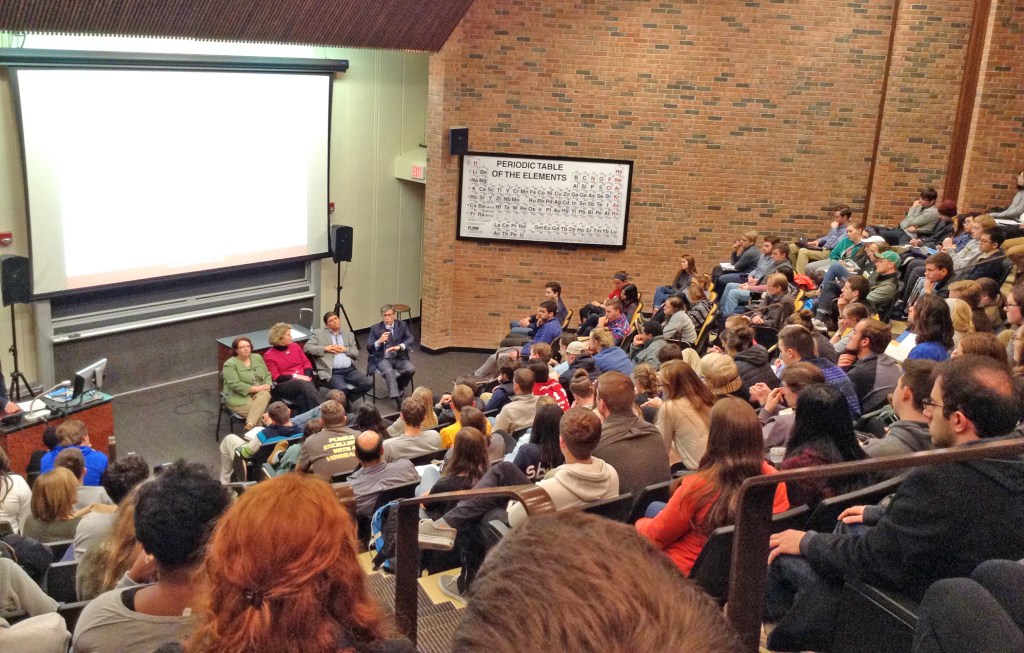 Two lawyers and two doctors walk into a lecture hall — not for a punchline to a joke but to share with students at Centre College about the legal and medical challenges facing the country.

Beginning with a short presentation on the Affordable Care Act (ACA), Margaret Young Levi, a Centre graduate and an attorney with Wyatt Tarrant and Combs, asked students to imagine the difficulties in knowing what to change.

Levi was joined by Ann Triebsch, a Centre graduate and an attorney with Humana; Dr. Kursheed Saddiqui of Danville; and Dr. Hugh Sims with Enspire Quality Partners in Bowling Green.

One of the goals, Levi explained, was to give everyone a level playing field when it comes to their health care, and all states were required to cover those with incomes up to 138 percent of the poverty level.

The problem, she explained, is knowing what comes next. Sims said he believes mandates, which are one of the most hotly debated part of the system, would have to stay. Otherwise, there’s nothing encouraging people to buy into the system.

“Have to have healthy people in the pool to offset the costs of older, sicker people … You have to keep everyone in the system,” Triebsch said. “Otherwise, there’s no way to fund it.”

There are those who believe everyone should pay for their own insurance, Levi said, but the problem becomes that some simply can’t afford it. 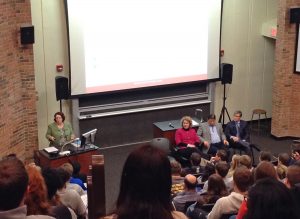 Kendra Peek/kendra.peek@amnews.com
Margaret Young Levi, a Centre graduate and an attorney with Wyatt Tarrant and Combs, speaks to students at Centre College on Wednesday, giving a basic explanation of the Affordable Care Act.

“Should everybody have to pay their own way? There are some who say, everybody should have to pay what they can afford,” she said. “Most people would say, we have to find a way to provide healthcare to people, even if they can’t afford it.”

For a family of four, Triebsch said, it would be more than $800 a month.

The other big group that benefitted from the ACA, they said, were the individuals with pre-existing conditions.

“Really, it’s a fundamental question about how you feel about health care,” said Sims. “If you look at all of you guys, you’re relatively healthy … insurance is going to be more affordable for you. It’s going to be more expensive for people who have pre-existing conditions. We have to decide, are we going to spread that around?”

“I see both sides of the issue, and feel for both sides,” he said.

Another issue with doing away with the ACA, Triebsch said, is that people aren’t so willing to let it go.

“People are saying, ‘I didn’t have coverage before. Now I have coverage. I don’t want to lose it.’ They are finding out that once coverage has been given, people don’t want to give it up,” she said. “They are realizing they have to fix it at the same as opposed to pulling the rug out from under the whole system right now.”

Saddiqui and Sims explained that the shift in health care had not been easy on doctors. One big reason was the sheer amount of paperwork needed per patient, and the need to run a variety of tests, tests that smaller practices may not be able to do. That’s why so many doctors were buying into other groups — Sims himself had been an independent doctor who joined Enspire Quality Partners, a clinically integrated network of doctors and hospitals.

Students asked questions of the four professionals, one including a question regarding opioid treatment, which is covered by insurance in some cases. Saddiqui said he had gotten additional certification in addiction medicine because of the huge increase locally.

“In the past, it’s always been a little bit of tug and pull between the law and medicine,” Saddiqui said. “You want to take care of the patient.”

Saddiqui used the harm reduction needle programs as an example.

“They’re going to do it anyway. You might as well give them needles and you reduce the chance (of other diseases spreading). In the last few years, the criminal justice system is learning harm reduction,” he said.

Triebsch said the lawmakers were discussing changing some of that, reducing the funding for opioid addiction by up to half, even.

Another question included helping the homeless populations in the state. Prior to the ACA, men often didn’t qualify for Medicaid, they said, and now they men did.

The conversations with the packed room of students continued for about an hour.

Overall the event went well, said Christian Gateskill and Stone Begley, two of the student officers of the Centre College Pre-Law Society, which hosted the event in partnership with Centre’s Pre-Medical Society.

“We thought it was really pertinent, because everyone hears a lot of noise about health care, but it’s always placed in a political context. If you’re a Republican, you don’t like Obamacare. If you’re a Democrat, you’re for Obamacare,” Gateskill said. “We wanted to provide a variety of perspectives, from a medical and legalistic standpoint. In reality, everyone has a stake in this.”