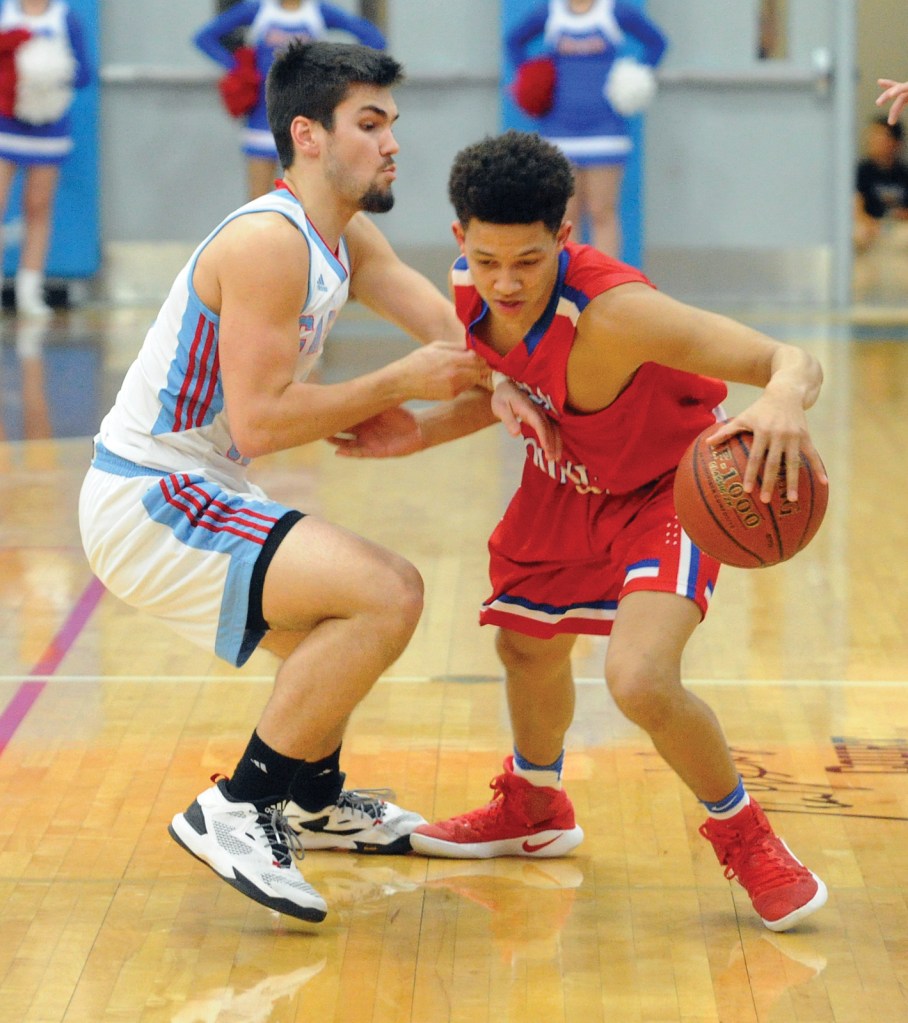 LIBERTY — Noah Young led the way once again and Lincoln County’s defense stepped up in the second half as the Patriots ruined Casey County’s senior night with a 65-58 win.

Lincoln’s win was its first in three games and was great preparation for the postseason, coach Jeff Jackson said.

“It’s a tough place to play and it’s a great place to play,” he said. “We play them in the last game of the year because it gets you prepared for a district tournament atmosphere. Even if we’re home or we’re here, the crowd is really good. It’s a doubleheader and the teams compete, it’s very physical. It prepares you for what is coming next week. It’s a great game to have going into the tournament.”

Casey jumped out of the gate, scoring 22 points in the first eight minutes. Seniors led the way after being honored before the game: Collin Miller had seven points, Jake Smith and Breece Hayes each had six in the first frame.

But no one could keep up with Young. He scored 10 points in the first quarter and 13 in the second quarter, and with threes from Devin Alcorn and Blake Smith, Lincoln’s offense was able to stay on the front foot.

Casey’s offense stayed hot in the first half, although the Rebels trailed 39-36 at halftime. Jake Smith had 14 points to lead his team at the break.

In the second half, Casey’s offense started to struggle.

“We shot 63 percent in the first half and we moved the ball,” Casey coach Jason Price said. “I feel like we were getting a pretty solid shot every time down. Our problem has been when we start trying to do things ourselves, we break down. We’ve been trying to break that habit over and over and over. We shot 35 percent in the second half and our ball movement was obviously not there.”

Alcorn helped hold Jake Smith scoreless in the third quarter and Riley Bodner had seven blocks for the Patriots, most coming in the second half.

“Riley, he alters some things because he has great length,” Jackson said. “He’s had some good games for us this year and some big moments, and hopefully he’ll continue to improve and get better. He’s just a freshman. He’s got good instincts on the defensive end as far as blocking shots. Just a really good defensive player, that was a big difference tonight.”

Part of Casey’s struggles in the second half stemmed from Hayes not getting the ball inside: He finished with two second half points and 10 total.

“I definitely wanted to get the ball inside to Breece more, he was 5-for-7 from the field,” Price said. “I felt like he had an advantage on the inside. He’s had a good year but sometimes we won’t throw it in there. But he’ll make a good decision, he’s a good passer. We’ve just got to do it.”

Casey will rely on Hayes and his fellow seniors — Jake Smith and Miller — if the Rebels hope to return to the 12th Region championship.

“They’re very talented and they’ve played a lot of basketball here at Casey,” Price said. They’ve been through it. They took the team last year to the finals of the region. Hopefully we make another run this year. They’re some of the most talented players that have come through here.”

But for the Rebels to make a run, Price said they’ll need to have faith in each other and the offense.

“If we move the ball and trust our offense, we’re dangerous,” he said. “We’ve done that a few games this year, and we’ve clicked. We’ve done it for portions of games. I feel like we did that fairly solidly in the first half before Noah Young got going on us. But when we trust our offense and let our shots come out of that, we’re so much more dangerous. That’s the main thing.”

Jackson was happy that his team rebounded after being down seven points after one quarter and hopes his team will be quick on its feet next week.

“We got off to a slow start, and they had something to do with that,” Jackson said. “But we battled and battled, fought and clawed to get back in it and the defense was pretty good in the last three quarters. We’ve got to continue to work hard, get better and prepare in practice for next Tuesday.”

Lincoln County will play the winner of Garrard County and Kentucky School for the Deaf in the semifinals of the 45th District tournament on Tuesday at Boyle County. Casey County will play Rockcastle County in the first round of the 47th District on Wednesday in Somerset.