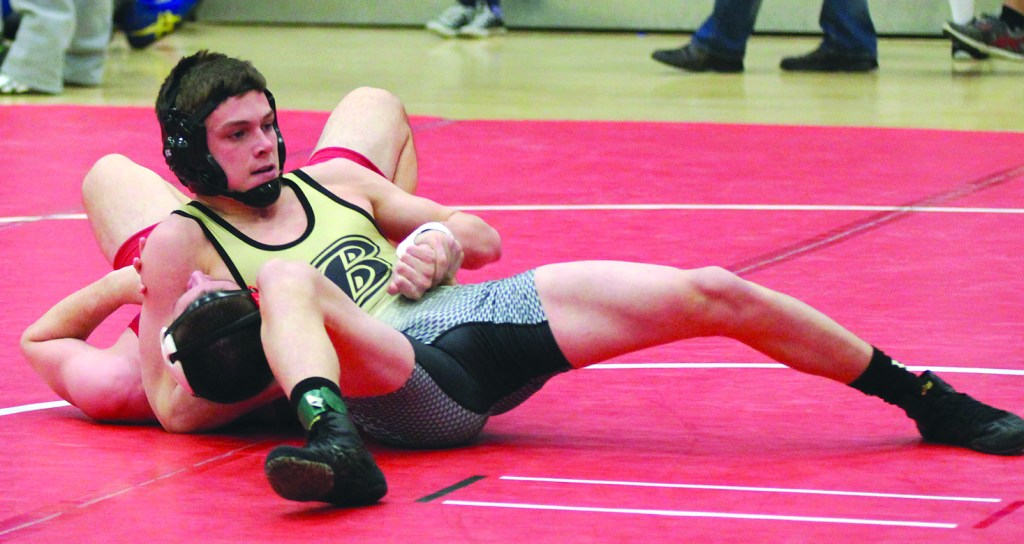 Lynn Witmer/For The Advocate-Messenger Boyle County's Hayden Shepherd is among four Rebels wrestlers who will compete at this weekend's KHSAA state tournament at Alltech Arena in Lexington.

LEXINGTON — Both Boyle County and Danville wrestlers competed in the state wrestling meet last weekend at the Alltech Arena in Lexington.

Both Harris and Bloh were representing the Admirals for the first time at state.

“This was the first appearance at the state tournament for Bloh and Harris,” coach Sallee said. “They both had good tournaments. The results weren’t what we wanted, but they wrestled well.

“Welch is a senior, so it stings a little more not to have him place. I think he wrestled as well as he could given the injury to his shoulder that occurred earlier in the season. He missed over a month, and it impacted his conditioning and timing.”

Boyle County’s Bates had the most success for the Rebels, winning his first two matches in the winner’s bracket. Robbins won his first match in the consolation and Shepherd didn’t win a match.

“It went about as expected,” Burke said of Boyle’s performance at state. “We were a little down, Derrick got hurt in practice so he didn’t participate. We had to put the alternate in from our region instead of Derrick.”

But Bates came out strong for the Rebels, winning his first two matches in the winner’s bracket before bowing out to the eventual state champion in the quarterfinals. He lost his next match in the consolation bracket to Union County’s Sam Bacon, who placed seventh.

“Jordan had really good success at the state tournament, I was very proud of the way he wrestled,” Burke said. “We fell a little short from what we wanted with his goals, he wanted to get on the podium. But he did make it to the blood round … I really feel like Bates should’ve placed. We had the No. 1 wrestler in the state in the quarterfinals, that’s who he lost to. He was actually the eventual state champion.”

Moody simply making the state tournament was a surprise to many people, coach Sallee said, but not to his team.

“Moody surprised people just by qualifying. We weren’t surprised at all,” the coach said. “We knew he had the skill to do it. It just took him some time to get in the groove this season. He works hard, and he will help lead this team next year.”

Morgan Sallee’s finish was disappointing because of how he wrestled against some of the other top competitors at the event earlier in the year.

“Sallee was disappointed in his performance,” coach Sallee said. “He works year round, and has beaten several of the 106 and 113 pound placers. It just wasn’t meant to be this year. He went 1-2.  He was injured back in the fall, and we were told he wouldn’t compete this season. He battled back, but never quite got into wrestling shape after missing five months off the mat.”

Boyle returns every athlete and the Ads will have senior Kelby Gay back on the mats — someone who coach Sallee said would’ve been participating at the state tournament if it weren’t for a season-ending injury.

Coach Sallee said some of the nerves might have gotten to his team at state, but that’ll only help them next year.

“I think nerves got to us a bit, especially on the second day,” he said. “I think we learned about the importance of warming up physically and mentally. It is an emotional roller coaster, and you have to be able to manage the ups and downs. There are some things we are going to do differently as a coaching staff next season that will help prepare our guys for the experience. We need to tweak our schedule some.”

Burke had similar feelings. Robbins, a freshman, had one win and Shepherd could’ve had one for Boyle.

“Jacob Robbins, my freshman, he won one match at state,” Burke said. “I thought that was good to get him a little experience under his belt. Hayden wrestled a little nervous, he definitely should’ve won one match. But he got there and he got the experience, that should set him up for a good run next year.”

The state experience will be a boost to every wrestler coming back, Burke said.

“What will really help is it’ll show them the intensity and the ferocity that your opponents wrestle with up there,” he said. “Even though Hayden could’ve won that match, what he probably found out is even the weaker opponents that he’s faced, they wrestle a lot harder than they do any other time during the season because it’s do or die. It’s state, it kind of speaks for itself. Kids do things there that they don’t do any other time of year. Going up there, wrestling in that and feeling how your opponents come out and wrestle to their best.”

The offseason doesn’t last long for either team. Both teams will be back on the grind next week, and both teams have offseason tournaments planned.

“The guys have about a week off, and then we start open mat sessions and weightlifting,” coach Sallee said. “Those will probably go three days a week. We encourage our guys to get there as much as possible.”