One dead after vehicle crashes into front of historic Centre house 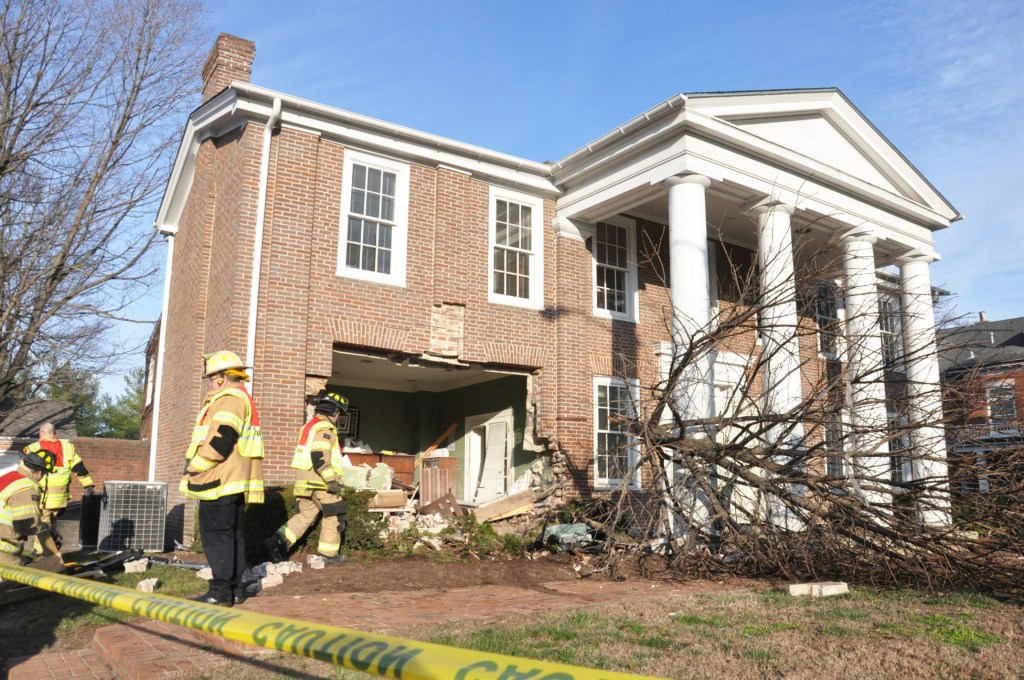 Firefighters work at the scene of a fatal wreck at Horky House on Centre College's campus Monday morning. (Photo by Robin Hart)

One man was killed Monday morning when his Nissan vehicle drove through a tree and into the first floor of a historic Centre College building.

“He died from a result of the accident, but what caused the accident is still in question,” Hamner said. “It may have been a medical emergency.”

A silver Nissan Rogue left the roadway at the intersection of Maple and Main streets, struck a tree and then crashed into the front left room of the Horky House on Centre’s campus, according to Boyle County Emergency Management Director Mike Wilder.

Mulholland said when firefighters checked the vehicle, they found a “patient who was deceased.” Firefighters were able to remove the vehicle from the building and then it was taken to the city garage to have the body removed in private, he said. 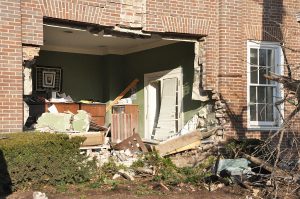 A Nissan SUV crashed through the front of the Horky House, taking out a section of the wall. (Photo by Robin Hart)

“We think about a medical emergency first,” he said, noting there were no apparent skid marks or any evidence of the driver attempting to use the brakes.

Coroner Hamner said Baker’s body was already in Frankfort for an autopsy before noon Monday.

Wilder said during the wreck, a tire came off the vehicle and was thrown through a second story window of the Horky House.

One person was in the building when the wreck occurred but they were not in the space where the vehicle struck and there were no other injuries, Wilder said.

Danville Police Chief Tony Gray said it’s still early in the investigation but an accident reconstruction will be conducted. More information may be released later Monday but a full report won’t be completed until later in the week.

Michael Strysick with Centre College said the Horky House was originally built in 1850, around the same time Centre’s President’s House was built. Centre acquired the building in the 1980s from the Horky family, which it was then named after.

Centre renovated the building and reinforced it with steel around windows and doors, Strysick said.

“Had we not done that, that corner may have collapsed.”

“Really it’s only that one office that’s immediately impacted,” Strysick said, noting that the college will verify the building is structurally sound before letting people back in. “It’s a very secure building from a structural standpoint … given the way that building is set up, we can pretty much isolate that space.” 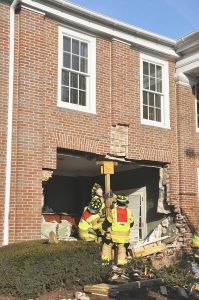 Danville firefighters reinforce the outer wall of the Horky House with wooden girders to ensure no collapse. (Photo by Robin Hart)

Danville firefighters reinforced the second floor where the wall had been knocked out with wooden girders. Strysick said Centre will come in and add steel girders, then determine what needs to be done in order to restore the building “back to its condition prior to the accident.”

“We’re very sad for the loss of the driver,” Strysick said. “We are grateful that no one was in that part of the building and of course our thoughts and prayers go out to the driver and his family.”

This story was updated with additional information at 12 p.m. Feb. 20.