Sally Hazel (Wallin) Burke, 91, of Stanford, passed away Saturday, February 18, at the Ephraim McDowell Regional Hospital in Danville. She was the widow of Paris Burke, Sr. who preceded her in death on March 6, 2005. 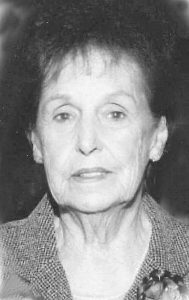 Sally was born in Crab Orchard, Ky. on April 16, 1925, a daughter of the late Fred and Amy Isabelle (Wren) Wallin.

She was a member of the Beech Grove Baptist Church where she had taught Sunday school for many years and was very active in the church. Sally loved her family dearly.

In addition to her husband and parents, Sally was preceded in death by a daughter, Sandy Kay Burke; sisters, Lucille Berry, Mary Jackson and Elsie Elam; brothers, Louis, Tom and Ernest Wallin; and granddaughter, Fran Clark.

In lieu of flowers, memorials can be made to the Make A Wish Foundation, In Honor of Hudson Brown at 1230 Liberty Bank Lane Suite 300 Louisville, KY 40222