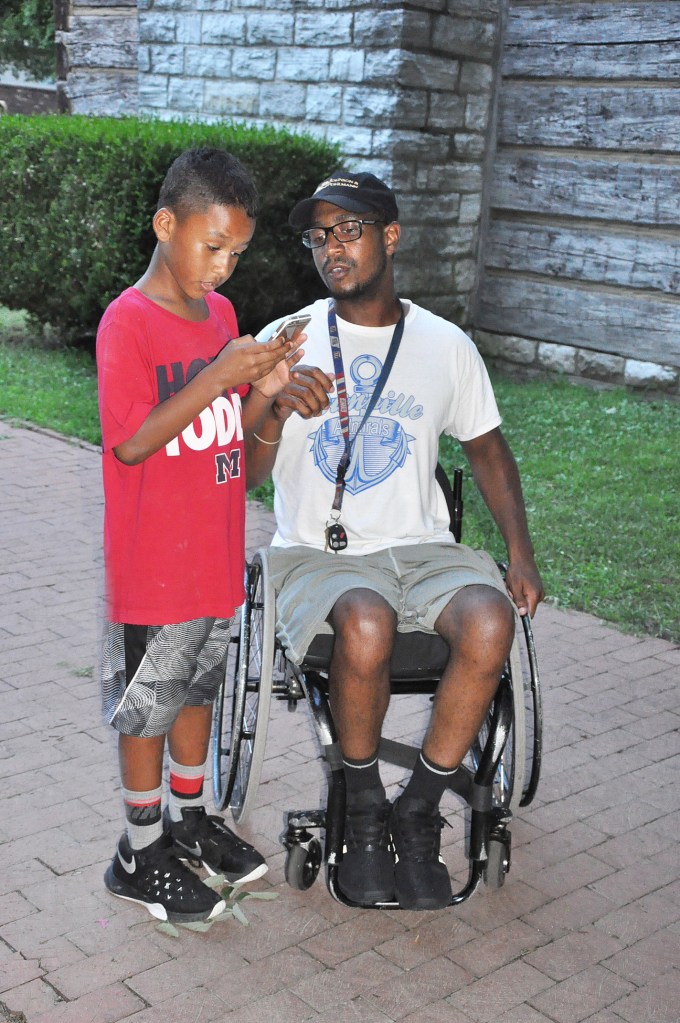 Robin Hart/robin.hart@amnews.com Jeffrey Guest with his son, Braylon, now 9, as they search for Pokémon last year. Braylon has only ever known his dad in a wheelchair, but Jeffrey hopes a procedure could change that. 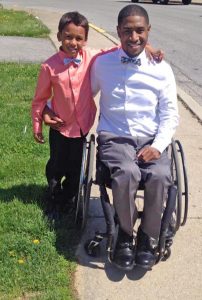 To be able to walk again is a dream for Jeffrey Guest, a dream that could one day be in his reach if the Danville native can raise the funds.

“I feel like this is God’s plan … this opportunity,” the 28-year-old Guest said. “This is my time now. I’ve waited eight years and nothing in the U.S. has came available for anyone in my position.”

“I was on my way to pick up someone at work and the front tire blew. As I was pulling over to the side of the road, the tire that blew hit a ditch and I flipped over,” he said.

Guest was 21 at the time. In a blink, his world changed. 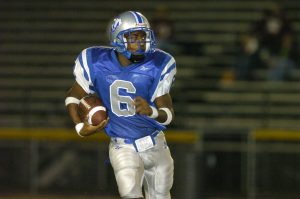 File Photo
Jeffrey Guest was a football player for Danville High School, graduating in 2007 with a scholarship to play at Campbellsville University, which he did before his life-changing crash.

Before the accident, Guest was a college football player. He graduated from Danville High School in 2007, and secured a scholarship to play at Campbellsville University. At the time, he was able to run and play with his son, Braylon, now 9.

But the wreck changed things.

“The only dad he knows is me in the chair. He copes with it very well,” Guest said. “To see my son be able to deal with his dad in a wheelchair — I don’t think he remembers me from before … I do. I remember the things I was able to do.”

The crash led to months and years of rehabilitation, physical therapy and searching for a cure.

“I went to Cardinal Hill for therapy. After Cardinal Hill, I came home. Then I went to SciStep in Mason, Ohio. I did therapy there for about a month,” he said.

At that time, a big fundraiser was held by Stuart Critchfield, Guest’s former football coach while he was at Toliver Elementary, to help him pay for a stem cell surgery.

He continued therapy at Frazier Rehab Institute at the Jewish Hospital Medical Campus in Louisville. There, he went through assessments for a clinical trial.

“They’re connected to so many different states; so many other patients going up for the same trial. They only picked one person. I just so happened to not be that one person,” Guest said.

That seemed to be an ongoing story, he said, and finally, he put a pause on the research, the trials and the therapy.

“I felt like it wasn’t really helping and I was just spending a lot of money, a lot of my brother’s money,” Guest said, referring to his brother Jordan who had supported him through the process. “It was very frustrating.”

Instead, Guest focused on going back to school.

“I wanted to have an education, just so I wouldn’t spend time thinking about it. But I always told myself once I graduated school, once I got close to the end, I would pursue a way for me to tackle being paralyzed, for me to stand up again.”

And that time has come: Guest graduates in May from Eastern Kentucky University with a degree in risk management insurance as well as finance. Presently, Guest said he isn’t sure what he will do when he graduates. 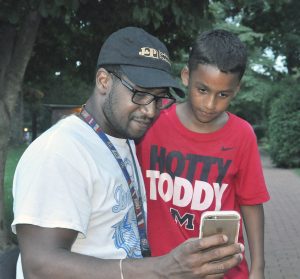 Robin Hart/robin.hart@amnews.com
Jeffrey Guest with his son, Braylon, now 9, as they search for Pokémon last year. Braylon has only ever known his dad in a wheelchair, but Jeffrey hopes a procedure could change that.

“I just want to get a good job to support me and my son,” he said.

After “months and months researching, trying to find the best place that there was possible,” Guest found Unique Access in Bangkok, Thailand.

The procedure would involve matching Guest up with the stem cells, then putting stem cell injections into the area that has been damaged, and then directly into the veins.

An accompanying procedure involves inserting a device called an epidural stimulator into the lower back, along with electron pieces into the spinal area to help send signals to the brain.

He will also undergo physical and aqua therapy while there.

The only side effects given were “bad headaches.”

“I can take a headache all day,” Guest said.

The success numbers are promising.

“They said 80 percent (success rate), with just the stem cell treatment by itself; and with the epidural, it is 95-100 percent,” he said.

“Success” is not defined by being able to get up and walk, Guest said. That would be the way an “able-bodied” person would define it.

His research turned up a man from England who had had a motorcycle accident, but otherwise had a similar story. Guest reached out to the man, who had promising results.

“He is now standing up, unassisted, for 30 minutes,” he said. “It takes time, it’s going to take therapy … he’s still walking with a walker. He can feel his thighs, his hamstrings, his ankles, his toes … Everything he lost in his accident, he has regained.

“I’m sure it’s not 100 percent, but he’s getting there. It just takes time. He said he’s regaining more everyday.”

Just like the trial he attempted to get into, Guest said other trials are available, but they are hard to gain admittance to and there are so many others vying for the same trials.

Of the money he’s hoping to raise, Guest said it is only going to pay for the treatment, not for travel. Anything beyond the $92,000 will be donated to the Christopher Reeves Foundation, which works to fund spinal cord and stem cell research in the United States, “only so they can push farther to get a cure here in the U.S., and get it cheap for people who are in my position, people who may not be in the same position to raise $92,000.”

If he is able to raise the money, Guest hopes to get the surgery done in August or September. He hopes to get it before the end of the year. It will take him about a month to complete the treatments. 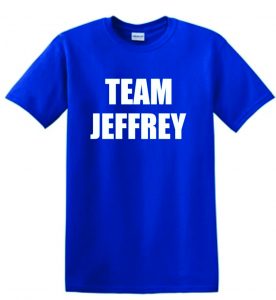 The front of the shirts to raise funds for Jeffrey Guest. Shirts are available in a variety of colors and can be purchased online at teamjeffrey.deco-apparel.com.

Throughout everything, Guest said he never allowed himself to get discouraged about getting out of a wheelchair.

“I feel like everyday I wake up, I’m not comfortable with myself. I put a smile on, because that’s what you’re supposed to do. But I’m not comfortable with myself,” he said. “Being in Danville, it’s not easy. Everything, I feel like, is an obstacle … I don’t like being helped. There might be a restaurant that’s a tight squeeze, or there’s apartments that they may be handicapped accessible, but I can’t get one. There’s only a select few and they’re always taken.

“You can tell, this world isn’t meant for people in wheelchairs.”

He also never lost the support of his son, his brother Jordan, his mother Bettina Guest and his grandmother Nancy Grey.

“I want to thank (my family) for being there and helping me through this,” Guest said.

He holds out hope for his fundraising effort, thanks to friends trying to help, and also accessible through GoFundMe.com/jeffreys-never-give-up-trip. 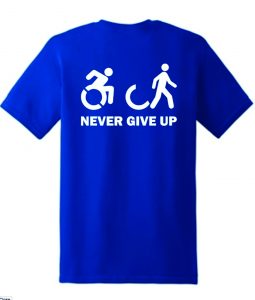 The back of the shirt to raise funds for Jeffrey Guest. Shirts come in a variety of colors and can be purchased at teamjeffrey.deco-apparel.com.

To order a shirt in support of Guest, call him at (859) 319-4997, go to Xtreme Style & Signs on Stanford Road, or visit teamjeffrey.deco-apparel.com. Shirts are $12-$16, with “Team Jeffrey” on the front and “Never Give Up” on the back, along with an stick figure of a man in a wheelchair, getting up.