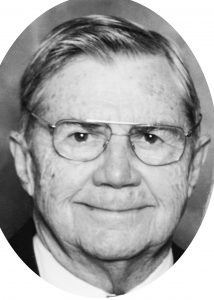 He graduated from Moreland High School in 1943 before joining the United States Navy. He served as an electrician’s mate on a ship in the South Pacific during World War II. Near the end of the war, his ship landed at Iwo Jima and traveled to Japan to return prisoners of war to their homeland. When he returned to the U.S., he trekked home by railroad and took in the whole country.

In 1946, he wooed and married Dorothy Jean Rakes and took a job in Danville at Palm Beach Company. Charlie and Dot had two children and played an active role in the community while devoting themselves to years of service in the First Christian Church.

Charlie lived a full life, and was preceded in death by his parents, six of his siblings, and Dot, to whom he was married for 65 years, prior to her death in 2012.

He is survived and cherished by, his children, daughter Gayle Spears and her husband Steve Shewmaker (Athens, GA) and son James Spears and wife Vicki (Danville); and his grandchildren, Zachary Shewmaker and his wife Lauren (of Atlanta, GA), Lennie Shewmaker (of Atlanta, GA), Alex Spears (Louisville), and Mallory Spears (Lancaster); and his sister, Emma Jean Ward who lives in Xenia, Ohio. He also has many nieces and nephews.

Visitation for Charlie will be in the sanctuary at First Christian Church after 10 a.m. on Friday, February 24 and the funeral will follow visitation at 11:30 a.m. Charlie will be laid to rest next to Dot in the Hustonville Cemetery.

In lieu of flowers, the family requests that donations be made to the First Christian Church of Danville.

Guestbook is available at www.wlpruitt.com