Danville down to brass tacks in 20-year energy efficiency contract 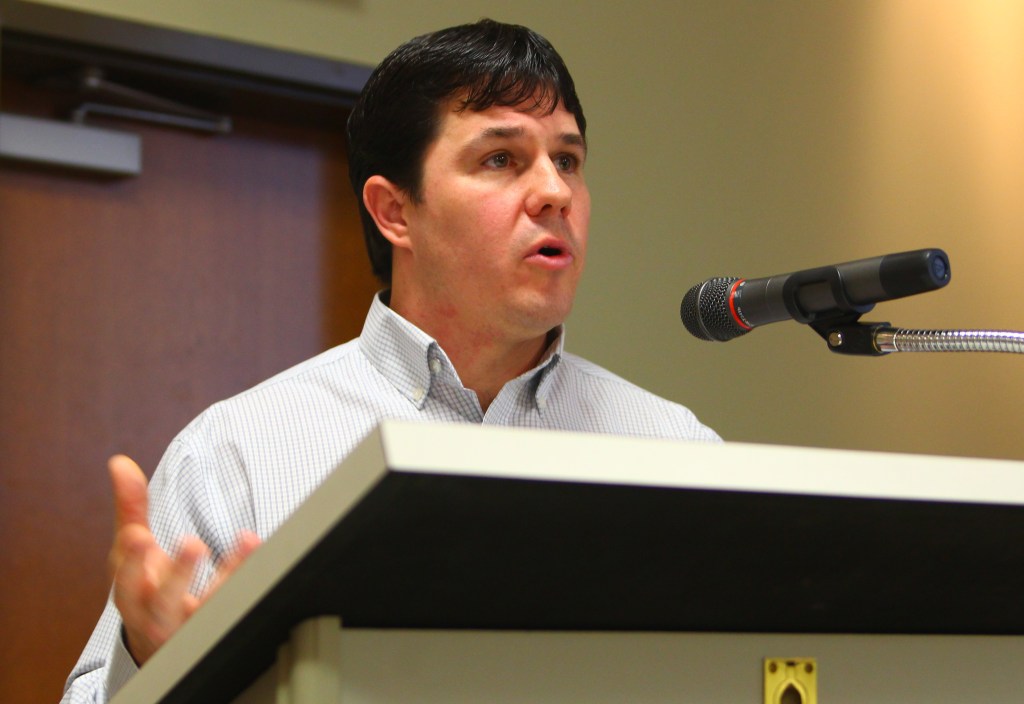 Ben Kleppinger/ben.kleppinger@amnews.com Brandon Marcum with Harshaw Trane speaks to Danville City Commission members Wednesday about a 20-year energy efficiency project that would require $8 million in bonds but pay for itself over time.

Danville officials had questions about — and praise for — a massive energy efficiency overhaul plan that would be guaranteed to pay for itself over 20 years.

The plan, which would require the city to take out just over $8 million in bonds initially, would:

• use “intelligent service” from Trane to monitor energy use and time heating and cooling to when people need it;

• upgrade light fixtures in those buildings to LEDs or other energy-efficient bulbs; and

The plan was presented to city commissioners at a special called meeting Wednesday morning. Danville selected Harshaw Trane to come up with an energy efficiency plan last year, and further narrowed the scope of what it wanted Trane to put in its proposal in December. 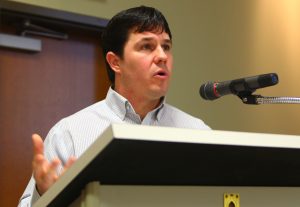 Ben Kleppinger/ben.kleppinger@amnews.com
Brandon Marcum with Harshaw Trane speaks to Danville City Commission members Wednesday about a 20-year energy efficiency project that would require $8 million in bonds but pay for itself over time.

A version of the plan presented Wednesday calls for Danville to spend $13.15 million over 20 years on lease payments and support services, while realizing $13.22 million in savings and $467,743 in lower capital costs. As listed in the spreadsheet provided by Harshaw Trane, Danville would ultimately save $534,477 by the end of the 20-year period compared to what the city is currently projected to spend without any changes.

Brandon Marcum, an account executive with Harshaw Trane, said the only piece missing from those numbers is what the actual rates for the bonds would be.

Marcum told commissioners the savings in the project would be guaranteed if Danville enters into a contract for the program. If, for example, Trane installs more accurate water meters estimated to save the city a certain amount of money and the meters are failing to meet the accuracy levels required, Trane would have to either replace the faulty meters or write the city a check, Marcum explained.

What are the improvements?

Out of the city’s approximately 10,000 water meters, about 2,000 can be read wirelessly while someone drives down a nearby street, Marcum said. Trane would leave those 2,000 wireless meters in place but replace the rest of the meters as part of the energy efficiency contract, he said.

The new meters could be read nearly instantly and would allow the city to be notified if a customer’s meter is seeing unexpected use. If a meter is running continuously for two days, for example, the city could get an alert and call the customer to let them know there may be a leak, Marcum said.

The buildings that would be upgraded include city hall, the Community Arts Center, Danville Fire Station No. 2, the 911 center and the city parking garage. At Millennium Park, Trane would replace all four HVAC units at the park’s buildings and install LED lighting park-wide.

One upgrade that caught the attention of several city officials was an overhaul of the HVAC system at city hall, which has generated a lot of complaints. One of the problems is that when a lot of people are in the city commission room, it can get very hot and nothing works to bring the temperature down, said Michele Gosser, chief financial officer for Danville.

Marcum said while the system itself is a good one — if it were a car, it would a “Mercedes” — it hasn’t been maintained properly or calibrated to be as efficient as possible.

“One of the first decisions we really had to make is ‘do you start over?’ Because there were so many problems. You pick an area of the building, there was some level of complaint, and many of them well justified,” he said. “Not every common complaint is correct; the ones in your building were. You had many places that were over-cooled or over-heated.”

Marcum said Trane “went through an extensive process” to figure out how the existing system could be reused.

“What we found was it was kind of a comedy of errors,” he said.

Marcum said 90 percent of the problems with heating and cooling in city hall could be fixed by providing preventative maintenance, calibrating the system properly and replacing two air intake units on the roof that are “essentially defunct” and not functioning properly. Using “intelligent services” from Trane, the buildings HVAC use can be further improved through monitoring and analysis, he said.

Heating and cooling at almost all city buildings would be connected to the internet under the contract, a fact that prompted Mayor Mike Perros to ask about protections against having those systems hacked.

Marcum said Trane provides the same types of systems for Amazon and UPS, both of which are large companies with stringent standards. Anthony Wright, another account executive with Harshaw Trane, noted Fort Knox uses the same kind of system that Danville would be getting.

Marcum said he was impressed that Danville has the ability to pay for the project entirely out of savings.

“This is the best financials of a municipal project that I’ve had the opportunity of working on,” he said.

Commissioners Rick Serres and J.H. Atkins both praised the plan as forward-thinking and an efficient, responsible use of taxpayer money.

“This is a proactive approach,” Serres said. “Preventive maintenance is way ahead of the game instead of trying to play catch up when things are failing.”

“This project is 100-percent paid for from savings and from revenues,” Atkins said, adding that Danville staff has been very helpful with the process this far. “We need that kind of PR to get out to the citizens because we oftentimes as commissioners hear quite the opposite.”

Marcum agreed, “your team has a great spirit of cooperation and just has been very accessible.”

Bonds would potentially limit other projects

While the project would be a net savings in the long run for Danville — and Marcum said the city could realize savings even in the first year — the $8 million in bonds required would potentially count against the city’s limit of $10 million per calendar year in bank-qualified bonds, Gosser said.

With $30 million or more in capital projects that the city wants to undertake soon, officials must decide which projects take priority. Or, Perros said at the meeting, the city could consider taking out non-bank-qualified bonds in order to gain access to more than $10 million in one year.

Such non-bank-qualified bonds have a slightly higher interest rate, but could be a good option depending on how much interest rates are expected to rise in the future, Perros said.

“We need to do that analysis because I am not afraid of doing non-bank-qualified bonds,” he said.

Gosser said if the city sticks with a $10 million limit, the energy efficiency upgrades would essentially be the city’s one big project for 2017. In 2018, the city could look at replacing or renovating the Central Fire Station and getting a new fire truck; in 2019, improvements to the city’s sewer plan and storm water projects would perhaps be atop the list, she said.

Marcum encouraged the city not to delay too long on Trane’s proposal.

“At this stage, projects aren’t fine wine or cheese — they don’t age well,” he said. “We do have a team ready to deploy.” 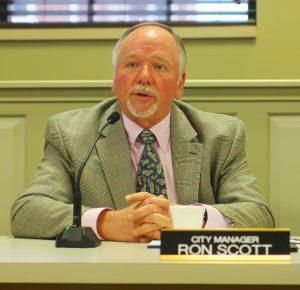 City Manager Ron Scott said at this point, City Attorney Stephen Dexter will review the proposed contract from Trane, then after a “staff discussion,” it will be brought before the city commission again for a vote.

Perros said he would like another meeting scheduled to discuss the rest of the city’s capital projects and funding priorities. “The sooner the better,” he said.