Lloyd Dailey, age 90, of Danville, formerly of Lancaster, passed away Tuesday, February 21, 2017, in Danville. Lloyd was born August 10, 1926, on a farm in Madison County, Ky. to Dewey and Beatrice Casey Dailey. 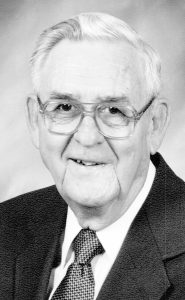 He attended school in Buckeye and after graduation, Lloyd registered for military service into the United States Navy in 1941. Seaman First Class Dailey was assigned to the command ship of the Third Amphibious Force, the USS Mount Olympus. Lloyd’s ship was in command of the occupation of Japan. He and his crew witnessed the surrender of the Emperor of Japan to General Douglas McArthur in Tokyo Bay.

He became a pilot and attended airline management school. In 1949 Southern Airways offered Lloyd a management position in Memphis, Tn. And then Hattiesburg, Ms. There, he met the love of his life, Mary Lloyd was successful in “retirement” as he developed a rural neighborhood out of farmland in the Nashville area as a hobby and then moved to Tim’s Ford Lake where he was also successful in developing lakefront property.

After a near fatal heart attack and open heart surgery, the Dailey’s moved to the Florida. After retirement, he returned to the Kentucky bluegrass, where he and his wife Mary spent the latter days in the Lancaster-Danville area.

The family would like to express their deep gratitude to the staff of McDowell Place for their loving care of Lloyd over the past three years. The family celebrates his life and knows that his spirit will remain with them to inspire them forever. Friends and family may leave condolences or special memories on his tribute page at www.ramsey-young.com