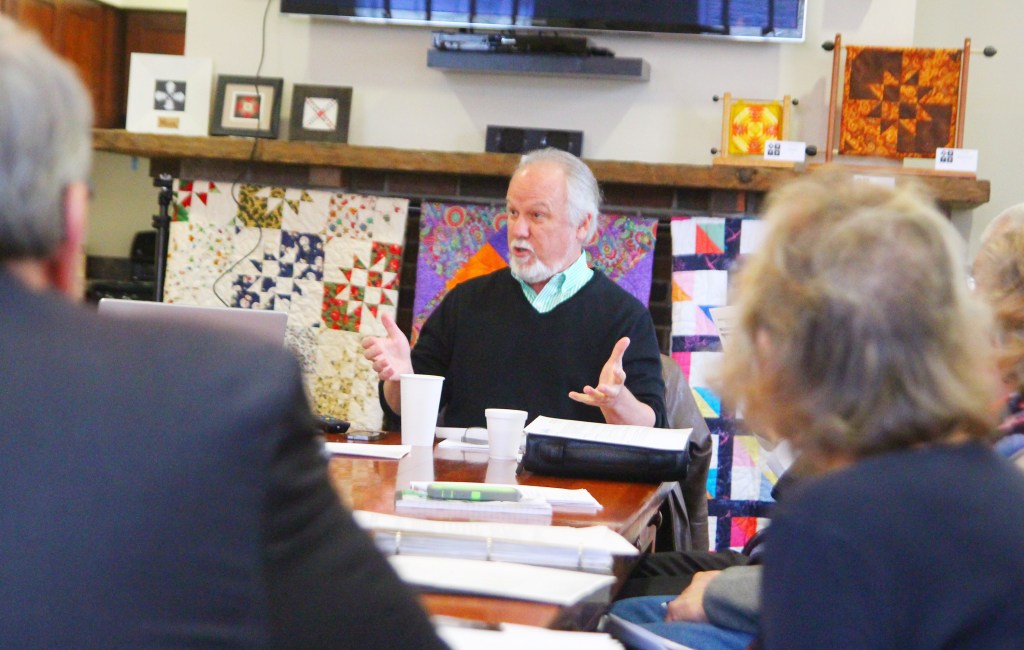 Ben Kleppinger/ben.kleppinger@amnews.com Ben Nelson, the new chairman of the Danville-Boyle County Economic Development Partnership, speaks during an EDP board meeting in February.

Fresh out of the gates as the new chairman of the Economic Development Partnership, Ben Nelson is focusing on unity among and participation from the EDP’s nine partner organizations.

“What you’re going to see me really try to emphasize is this is nine separate organizations that have … consented to work together for Boyle County,” Nelson said Tuesday. “And that’s hard to do, but we can do it with inspired optimism and a lot less drama.” 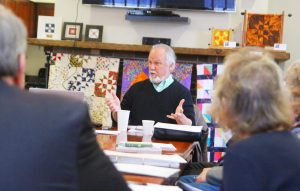 Ben Kleppinger/ben.kleppinger@amnews.com
Ben Nelson, the new chairman of the Danville-Boyle County Economic Development Partnership, speaks during an EDP board meeting in February.

In recent meetings and in a report summarizing 2016 highlights and an outlook for 2017, Nelson has repeatedly used the phrase “we before me,” indicating his desire to see EDP members work more together.

“We still struggle sometimes with putting ‘we before me’ as a team of nine different organizations. We have come a long way but still have moments of acrimony and division that harms us in the eyes of those we serve,” Nelson wrote in his 2016-2017 report, which he presented to the Boyle County Fiscal Court earlier this month. “Business prospects often read our local newspaper online as one means of getting to know the community, and will quickly choose to focus on other locations when a community appears to be in open conflict over economic development efforts.”

Nelson said Tuesday there has been a “history of relationship tensions between various partners” and a “history where we deal with conflict through the media instead of talking out our differences of opinion in a healthy way.”

“We send mixed messages when we are openly combative through the media,” he said. “It’s OK we don’t agree, but we shouldn’t be bashing each other in the media.”

As a result of bickering in past years, “we have a confused constituency about how effective and efficient this partnership is,” Nelson said.

“We’re actually, I think, by a lot of accounts one of the better economic development organizations for sure in the state, if not the country,” he said. “But that’s not how we think of ourselves.”

Nelson assumed chair duties on the EDP in January, after former Chairman Richard Trollinger retired after the EDP’s December board meeting.

Trollinger, who retired from a 20-year career at Centre College at the same time, had served on the EDP board since 2010 and as chairman since 2014.

“We had a wonderful chairman in Richard Trollinger and he did a wonderful job and I think Ben is going to follow in that mold, although his focus and his interests will be a bit different,” Boyle County Judge-Executive Harold McKinney said Tuesday. “I look forward to working with Ben. I think he’s done a really good job so far in talking about what EDP should be and in getting in touch with the partners and working to get everybody on the same page. I think he brings something to the table that’s very good, as did Richard Trollinger bring something to the table that was very, very good.”

Nelson said he wants to see the EDP to do more than share information between member agencies.

“Old meetings used to be an information-sharing extravaganza,” he said. “We’re trying to move the meetings into more action-oriented stuff.”

At the most recent EDP board meeting, Nelson emphasized both the need for communication and the importance of showing up and participating. He provided Board of Director members with a print-out of an EDP bylaw requiring healthy attendance by EDP board members.

“In the event of a partner director’s absence at three regular (meetings), the Board of Directors shall give notice in written form to the partner represented and may request the partner’s appointment of another partner director,” the bylaw reads in part.

The bylaw also provides for removal of at-large members — those who serve but are unaffiliated with a specific member organization — for similar lack of attendance.

“I’m going to begin to talk with you all about expectations of this board and what our role is and this would be my starting point,” Nelson said. “Everybody see this attendance deal? I intend to enforce it. So I’m looking for you — if you’re on this board, for you to be able to serve, to be ready to work together, and that includes coming to this meeting.”

Minutes from EDP meetings this fiscal year show mostly healthy attendance from nearly all members, but one member entity — Junction City — has not sent a representative for any of the meetings.

Nelson said Tuesday that while Junction City has “been historically absent” from EDP meetings, his goal with pointing out the attendance rule was more general.

“What I was doing was not necessarily calling out people that have not been complying but it was the new chairman making clear expectations,” he said. “The previous chairman had not talked about attendance in a while.”

Nelson said the EDP is attempting to meet with local government agencies whose makeup changed in the most recent election — Perryville and Junction City — and provide an “orientation” on who the EDP is and what it tries to accomplish. Nelson has already met with Perryville officials for such a meeting; a meeting with Junction City has not been scheduled yet.

Junction City Mayor Jim Douglas said he wasn’t interested in commenting on the city’s relationship with the EDP. Asked if he would like to see the Junction City-EDP relationship improve, Douglas responded, “Sure — why not? But I don’t have any comment to make.”

Danville down to brass tacks in 20-year energy efficiency…