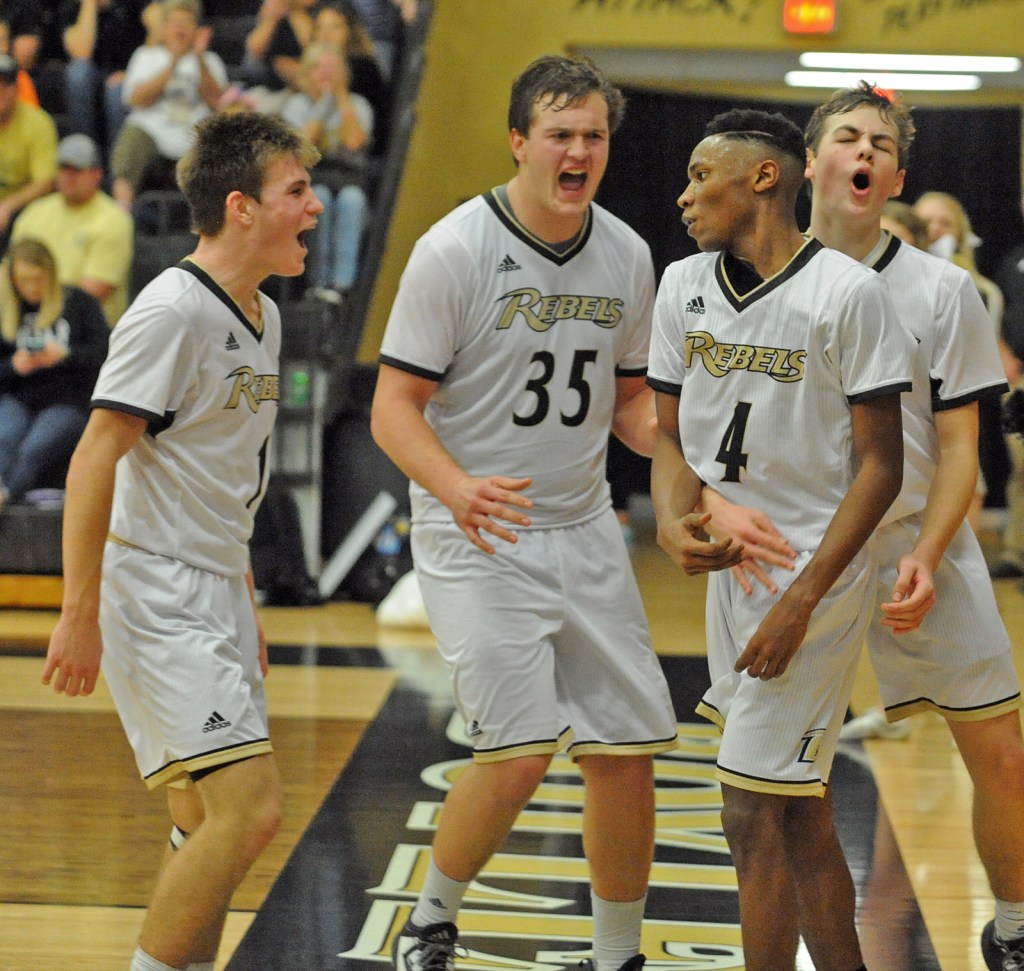 The Rebels are on a roll.

Boyle County has won four straight games after a 62-41 dismantling of rival Danville in the semifinals of the 45th District boys basketball tournament on Wednesday.

Jason Alexander led Boyle with 19 points and three assists as he helped control the pace of the game from the start. The Rebels outrebounded Danville 31-23 and shot 54 percent from the field compared to Danville’s 31 percent.

“Past couple of weeks, we’ve been playing really well,” Boyle coach Steve Adams said. “Playing hard. We’re still having those moments where we just go a little goofy, but for the most part, the kids did a really nice job tonight. We’ve been working on switching defenses, doing different things defensively to keep people off balance. For the most part, we did a good job on the defensive boards. We took care of the ball pretty good and executed, got what we were trying to get. All in all it was a nice effort from the guys.”

Reese Smith added 13 points, three assists and a game-high eight rebounds. Will Bramel was 6-for-7 from the floor with 12 points and six boards.

Boyle leading scorer Bryce Slone had just seven points on 2-of-8 shooting, something that Danville coach Ed McKinney was happy about.

Danville’s struggles came on the offensive end once again. The Ads scored just six points in the first quarter to Boyle’s 16 and trailed 33-19 at halftime.

“We’ve struggled to score all year. It’s been a struggle,” McKinney said. “Even in one of our best games of the year against Lincoln, it was 41-39. (Boyle) beat Lafayette at Lafayette and Wayne at Wayne. They’ve gotten better. And they’ve beaten Mercer at Mercer. When you do that, you’ve got a pretty good team. Their guards are experienced.”

Boyle’s defense showed Danville different looks throughout the game, switching between a three-quarter court press to a 1-3-1 zone to 2-3 zone to man-to-man.

“I think that always hurts us,” McKinney said. “We’re having to adjust to a lot of that on the bench because we haven’t played. Even though, you would think you’ve got a year of experience, we haven’t seen a lot of teams do that. They were changing it up about every trip. That makes it hard to get in the right sets, and then you get frustrated when the ball doesn’t go in the basket. We probably shot too many (3-pointers), we wanted to try to drive it more. But they did a good job closing that down.”

Boyle’s defensive effort will have to be on point Friday against Lincoln County. The Patriots won both regular-season games by three points, including one triple-overtime thriller. Boyle and Lincoln have matched up in the 45th District championship in each of the past six seasons, with Lincoln winning the last three meetings.

“It seems like every year almost,” Adams said. “It’s going to be a great basketball game. This year, triple overtime, three point games. It might be as good of a high school basketball game rivalry that you’ll see anywhere. The place will be packed, kids will be playing hard. We’re going to have to play awful well. We’re excited about the opportunity to play against a good team in one of our biggest rivalries. We’re excited to be playing.”