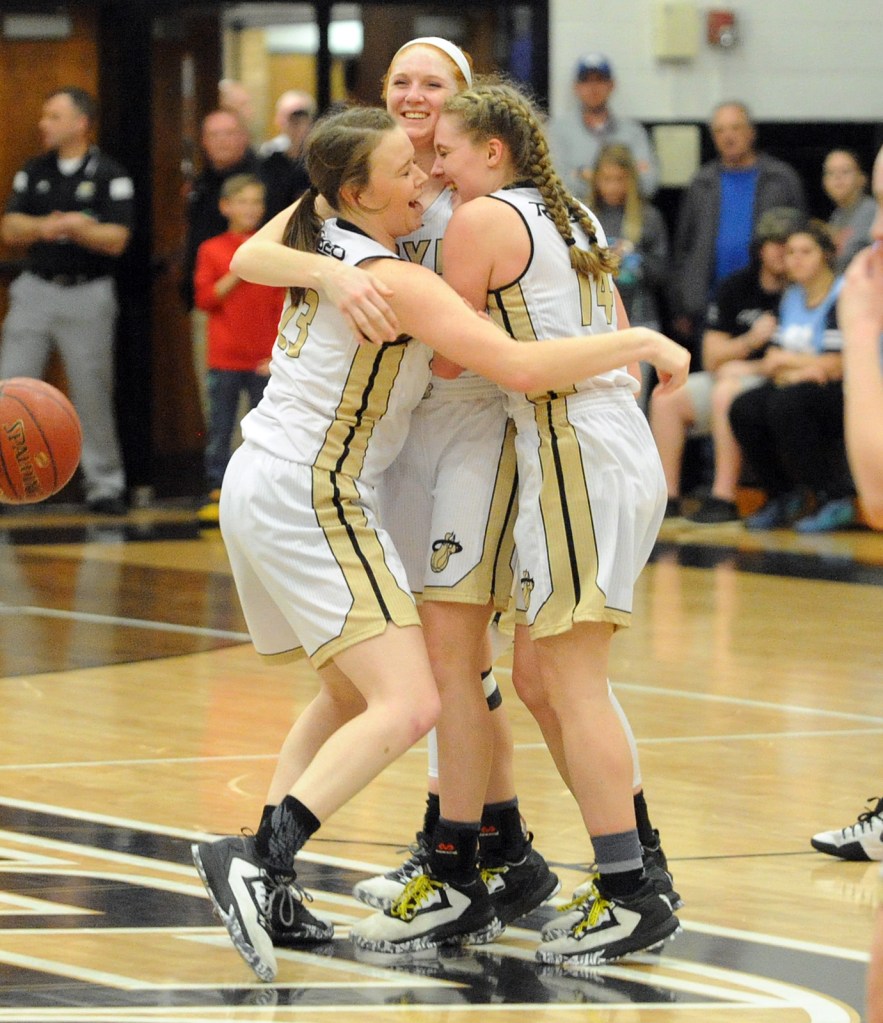 It’s hard to beat a team three times in a row.

Emmie Harris scored 23 points to lead all scorers, netting 15 points in the second half. But the story of the Rebels’ win came on the glass: Boyle had 43 rebounds, led by Danielle Roney’s 17.

Boyle coach Greg Edwards said he and his coaches made it a point to bring up last season’s defeat in the buildup to Tuesday’s game.

“We talked a lot about last year and about how we did a good job positioning ourselves and had beaten Danville twice through the season,” Edwards said. “We didn’t really play as well as we could have, Danville had a lot to do with that, obviously, last year. We’ve been talking all week about making sure that we play the best that we can play to give ourselves a chance to not have that happen again this year, what we needed to do to get better so we wouldn’t face that same fate.”

The Rebels delivered a show on the glass.

“We’ve been shooting for 40, been hovering around 33, 35,” Edwards said. “Tonight we got 43. Any time we get 40 rebounds, that’s a pretty good night. One thing a lot of people don’t realize is Danville is great on the boards. Their guards do a great job rebounding. We knew, for us to win the game, we had to stop their guards from rebounding. I thought, for the most part, we did that.”

Boyle jumped out to an early 10-5 lead and led 18-10 after one quarter. Danville trimmed the lead to 28-23 at halftime, with Boyle’s Gracie Edmiston scoring all 10 points for the Rebels in the second quarter.

Danville coach Michael Menifee was animated on the sideline throughout the game, but particularly after his team’s slow start. He said he wanted his team to will itself back into the game.

Menifee said rebounding and 50/50 loose balls were the reason for the loss.

“For some reason, our rebounding failed us and we just didn’t have it,” he said. “They got to every 50/50 ball and every rebound. That was the tale of the first half. We stymied it a little bit but we wore ourselves out and we couldn’t make a lot of shots there at the end.”

Danville was also beat from the foul line: The Rebels finished 26-for-39 from the line; Danville was 2-for-5.

“In the 27 games that we have played, for some reason, for us to be the smallest team, we get called for more touch fouls,” Menifee said. “But for a team that drives it to the rim, we don’t get that same thing. It’s even been in our wins, and like I told the girls, it’s a travesty, for a team like us to get treated like that. I really don’t know what it is. But I’ve never been a guy that has made excuses, I don’t make excuses, we got beat tonight.

“But that right there is what I feared would cost us a chance to win a district championship, because it’s happened all year long. We’ve been able to overcome it a lot, but it’s a travesty, the quickness that we get whistled, but on the other end, we get bumped and banged and we never get that same quick whistle. We really have to get hammered in order to get a whistle. But that was just one thing that hurt us that we couldn’t overcome. But it was rebounding, we just didn’t rebound the basketball.”

Edwards praised his bench for its performance in the win: Rachel Leath came on and had three points and three rebounds. Keely Bowling entered for a bleeding Harris in the second quarter and helped hold the lead.

“I thought we played really well in the first half, but the second half was even better,” Edwards said. “We executed about as well as you could in the second half. Rachel Leath came in and stepped up big. Everybody else that came into the game did their role, they did their job. That’s the last thing I said to them when we went out, ‘do your job.’ And I thought, from the end of the bench to all five starters, everybody did their job, all week long. That’s kind of what propelled us to win tonight. I just thought we were ready to play. Playing at home certainly didn’t hurt, had a good crowd, good atmosphere and just overall, one of the stronger games we’ve played in awhile.”

It’s Boyle’s seventh win in a row to end the season, and the Rebels will now face the winner of Garrard County and Lincoln County, which play tonight at Boyle, in Friday’s 45th District championship.

“Both of those teams, Garrard is playing well, Lincoln got a win in their last game,” Edwards said. “Lincoln is Lincoln. We’re excited to be in the championship game and we’re going to hopefully play as well as we did tonight and give ourselves a chance. Both of those teams are worthy teams, either one that wins is going to represent the district well in the region. Right now we’re just glad we get to practice a couple more days.”

Menifee said he hates the way his seniors went out but said his team can hold its head high.

“It hurts for them. Wanted them to go out as district winners,” he said. “But like I told them, ‘Don’t hang your head. You guys have done a lot. There’s nothing to be ashamed of.’ This basketball game doesn’t define them as people. Like I told them, I’d put them up with any team in the 12th Region. We’re the classiest team, we carry ourselves with great pride and character with a win or a loss. That to me means more than any losses, that people can say that about us.”