Valerie Jean Flachbart, 55, of Hustonville, died peacefully at her home Tuesday, February 21, 2017, surrounded by her beloved family. Born October 16, 1961, in Cincinnati, Ohio she was the daughter of the late JW “Pete” Sharp and Muriel Koebbe Sharp. 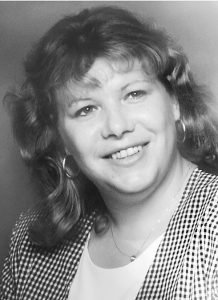 She was a corporate executive for Walmart and retired after 20 years of service. She was Roman Catholic and founded the Isabellas Womens Organization in Mantua, Ohio.

In addition to her mother, she is survived by her husband, Neal Flachbart; two sons, Bryan (Mary) Flachbart of Danville and Bradley Flachbart of Ravenna, Ohio; and her siblings Scott (Wendy) Sharp, Melody Murphy, Patricia (Warren) Dake, Julie Sharp and John Sharp; and many nieces and nephews.

Mass of Christian Burial will be held at 11 a.m. on Saturday, February 25, 2017, at Saints Peter and Paul Catholic Church. Father Chris Clay will officiate. Visitation will be held from 5 to 8 p.m., Friday February 24, 2017, at Stith Funeral Home. In lieu of flowers, the family suggests donations to Heritage Hospice of Danville.