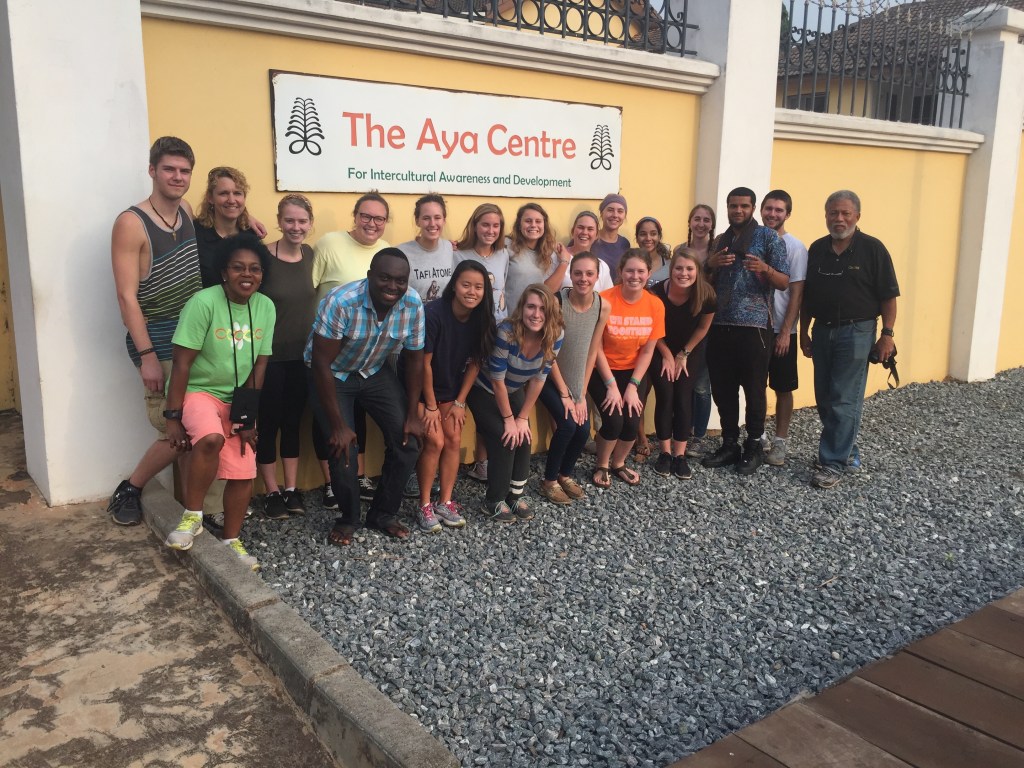 Photo submitted | Students who took a three-week Centre Term class in Ghana pose for a photo outside The Aya Centre, an organization that helped coordinate the trip with Centre College.

Centre students Macgill Gaines and Sahr Asif have done something not many teachers in the U.S. have done: They’ve taught elementary school classes in Akropong, Ghana. More impressive than that: They had never taught a class before in their lives when it happened.

“It was our first time ever doing something related to teaching. We’d never really observed (a teacher) before,” said Gaines, one of 17 Centre College students who traveled to Ghana for an intensive, three-week “Centre Term” course on education over winter break.

“So we got there and the teachers were like, ‘OK, we’re ready for you.’ And we were like, ‘oh — OK,’” Gaines said.  “We had some lesson plans planned out but actually teaching was something we had never done before. So we got up there, we taught our first subject and they were like, ‘OK, keep teaching.’ And we said ‘OK … and we just had to keep on teaching.”

Centre education professor Sarah Murray said students in the unique class were tasked with helping teach English to elementary- and middle-school students at four different schools during the trip to Akropong, a small city to the north of Ghana’s capital, Accra.

“I’ve taught this class in Costa Rica; I’ve taught it in Mexico,” Murray said. “Wherever we go, we teach English, and that’s kind of the focus, but we also look at the culture of that particular area. But it’s all about teaching English as a second language.”

Centre coordinated the trip with help from Aya Centre in Ghana.

Murray said students can teach English through other subjects such as science and math — both of which were subjects students on the Ghana trip used.

Being thrown in the deep end of teaching may not have been the intended goal of the trip, but students said the daunting experience gave them something they wouldn’t have had otherwise.

“I never wanted to be a teacher, but I think this experience gave me a different perspective on how hard being a teacher really is and how they have to adapt,” said Joao Kwame Monteiro, a junior finance and economics major who wants to work on the operations side of an NBA team.

Madison Grant, a junior working on an education minor, had experience running a classroom prior to the trip. As a result, Murray said she and fellow Centre Term professor J.H. Atkins asked her to be the odd student out and teach in a classroom by herself.

“It was definitely a big transition,” Grant said. “I’d been in the classroom a lot here, but I’d never experienced how difficult it was.”

In the school where Grant taught, students were very limited on their resources and didn’t have easy access to supplies like students in the U.S. might.

“Not having any resources or materials handy is going to help me be more creative and kind of think outside the box for lessons that I want to use in my classroom,” she said. “We’re so reliant on technology and easy things like scissors and crayons that they do not have at all. So it challenged me to think of very different lessons than I normally would.”

Forrest Nanney, a junior history major, ran into a similar lack-of-resources problem at the school where he was teaching.

“One day me and my partner were sitting in the back, we’d finished teaching,” Nanney said. “One of the teachers came to the back and handed us a book about Paint — the program on the computer — and they were like, ‘alright, you guys are going to teach them about Paint.’ And they didn’t have computers and we had no idea what to do. So we just had to come up with stuff and draw stuff on the board … that was something that I was not expecting at all.”

“I think I have a much greater respect for teaching,” Gaines said.

“The things I learned I’m going to use throughout (my life) even if I don’t specifically go into teaching itself,” Asif said.

While they were in Ghana, the students stayed with local families rather than in a hotel. That was the favorite part of the trip for Monteiro.

“We stayed with ‘Grandpa’ — that’s what we called him, ‘Grandpa.’ He was a character on his own,” Monteiro said. “He would ask us how are day was, then he would throw out jokes, talk about Trump, all in good fun. … He was a 65-year-old, but whenever he was with us it felt like he was our age. He felt like one of the boys. …

“I remember when we had to say bye to him — that was definitely one of the toughest things to do.”

Staying with families “definitely made the experience,” Graves said.

“Being in the schools is an amazing experience but going home to the culture … was even better,” she said. “If we were to stay in a hotel or a hostel, we would not have had the same experience at all.”

Graves still talks with one of the family members she stayed with. She also made friends with a little boy she met at the school, Henry. 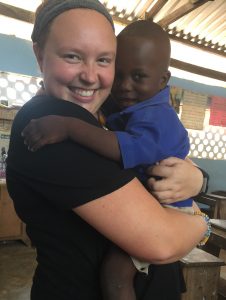 Photo submitted |
Centre College student Madison Grant holds a little boy named Henry who became her friend while she was in Ghana.

“I love talking about him. He’s this little boy — he’s probably about four years old and he became my best friend there,” she said. “He just crawled on my lap one day and then started eating my snacks. And then every day since, he did it.”

Graves couldn’t tell Henry when it was time for her to return to the U.S. because he hadn’t yet learned to speak English.

“I noticed when they told him in their native language of Twi that I was leaving, his demeanor completely changed and it just broke my heart,” she said. “But the other day, I got a picture of him, sent from my teacher. He got a new outfit and he said for (the teacher) to send it to me. He’s so cute.”

Murray said the students all did a remarkably good job adapting and learning from the experience.

“They had a lot packed into three weeks. They had the schools, they had the home stays, and then we traveled every weekend that we were there. And they were required to do work for the class,” she said. “… We did not intend for them to go in and teach all the time. But they did an amazing job.”