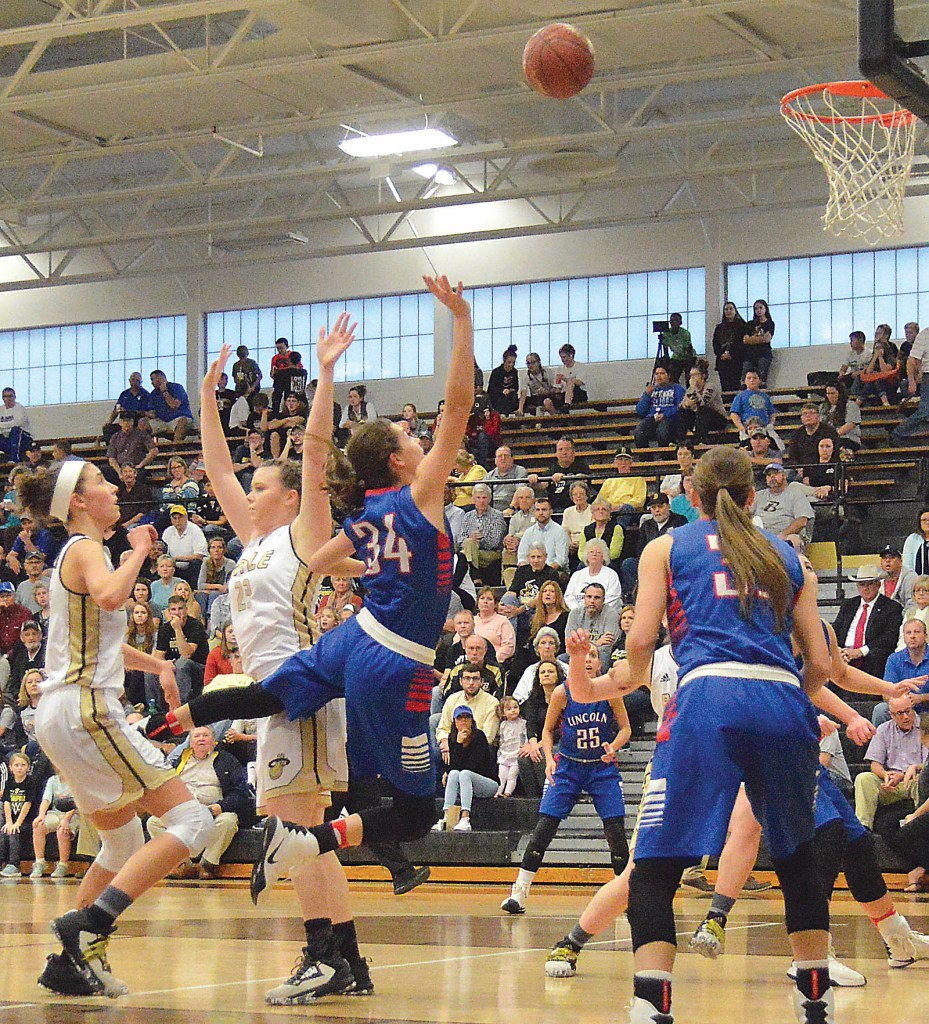 Jeremy Schneider/jeremy.schneider@amnews.com Lincoln County's Emma King (34) scored 25 of her 32 points in the first half of Friday's win at Boyle County.

Cassandra McWhorter has been battling the flu for over a week, but apparently that’s the only thing the Lincoln County girls basketball team hasn’t taken from their coach.

The Patriots pressured Boyle County from the opening tip of Friday’s 45th District championship game and never let off, winning their ninth district title in the last 10 years with a 74-61 win at Rebel Arena.

“Anytime you win a district championship, that’s a big deal,” McWhorter said. “It’s definitely important to get it for seeding (Saturday) at the draw so you won’t face a Mercer County or Southwestern early on. Hopefully it gets you on that winning side and maybe get a good draw and get opposite some of those other dominant teams in the region.”

Meanwhile, the Rebels finished runners-up in the district tournament for the third time in the last four seasons. They haven’t won a district title since 2007.

“They’re the defending district champs … I told our girls, Until you decide that that’s not going to keep happening, that’s going to keep happening,” Boyle coach Greg Edwards said. “… There’s nothing that beats experience. I used to coach boys basketball at Harrodsburg and we won nine or ten districts in a row, and what happens is even when other teams are equal to you or better, when it gets in this situation, it’s still difficult. Until you break through, it’s difficult.”

McWhorter said she came down with the bug last Thursday and took that Friday away from school. She coached the team that night in a win at Casey County, but she made sure to keep her distance from the players and not touch them.

Apparently, her precautions have worked so far because the Pats () were clicking on all cylinders in the district title win.

They never trailed in the game, jumping out to a 21-13 lead after the first quarter as Emma King scored 15 points in the frame, draining three 3-pointers. The sophomore had 25 points in the first half and finished with 32, along with eight rebounds.

“Both games in the tournament, she’s stepped up and played the way Emma King is always capable of playing,” McWhorter said. “Early in the year, I think with some of the tension and she felt a little pressure. She’s a sophomore, she just turned 16 this year, and early on, I think there were some nerves, some pressure. I think there here of late, she’s really grown up and showing the type of player she is and getting the attention she is.”

Edwards has seen his fair share of King’s prime performances in her young career. In her last five games against the Rebels, King is averaging 24.2 points, and this year, she’s put up 89 points in three meetings.

“She just must love to see Rebels across the jersey or Boyle County,” Edwards said. “Third quarter, she banked in a 3-pointer. … Every single night that we’ve played her, that’s been the thing. I joked with the coaches at one point, I was thinking about playing triangle-and-two and putting two people on her.”

The Pats quickly extended their lead to double digits early in the second quarter as Haley Southerland and Kaitlynn Wilks each hit field goals and King made a pair of free throws for a 27-15 lead. Boyle couldn’t get any closer than 10 points the rest of the half and entered halftime down 43-31.

“Late in the fourth quarter, I could see Boyle County’s body language changing a little bit, and I know the way we’ve been playing defense — anything is possible — but as long as we could contain them and not let them score or go to the free throw line … I knew we could handle the ball enough and were good enough free throw shooters that we could pull it out.”

While the Pats were putting up the second most points they’ve scored this month, they were suffocating on defense as well.

“It’s something we’ve really been talking about for the last couple of weeks now,” McWhorter said. “That’s been our key since the beginning of that week. The girls have really bought in, and there’s no better time to ask them to buy into defense than tournament time.

“These last two games they’ve done what we’ve asked them to as a coaching staff on the defensive end.”

Wilks finished with 16 points and eight rebounds for Lincoln (21-8), and Southerland added 13 points and seven boards.

Boyle’s Emmie Harris overcame a slow start — only four points in the first quarter — to lead all scorers with 33 points. She went 9-of-12 from the free throw line, the lone bright spot as Boyle struggled to a 14-of-29 mark from the stripe.

Danielle Roney was the only other Rebel in double figures with 10 points.

“I was wanting to get this one for Emmie, being the only senior,” Edwards said. “But I told the girls, We’ve got next week. The good and the bad thing is our district is loaded. These other districts, they don’t play anybody. You’ve got us, Lincoln, Danville, Garrard County, all four of us could all go next week and have a chance to win a game.”

Lincoln and Boyle will discover their fate as the 12th Region draws its tournament this morning. Next week’s tournament will be hosted by Pulaski County.