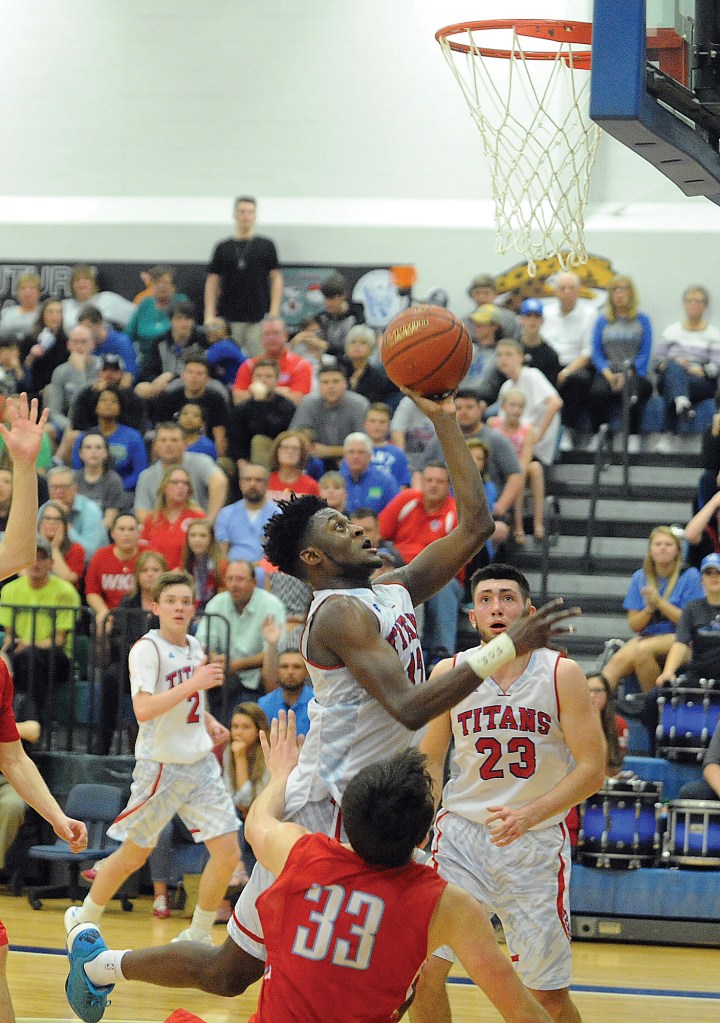 Still, the Titans’ defense made a titanic effort in the fourth quarter to beat West Jessamine 59-56, earning their third-straight district championship.

Mercer held West to three points in the entire fourth quarter, coming back from 12 points down at the start of the quarter to win. Gunnar Gillis scored eight of his 13 points in the fourth quarter and Trevon Faulkner had six of his game-high 31 points in the frame. First-year coach Kurt Young said he’s thrilled for his players to come back and win.

“I’m just so happy for our kids,” Young said. “It’s a great group of kids, and like I told them, as a coach, you kind of live through them. To have them enjoying this moment, that’s what makes it special.”

West Jessamine came out firing in the first quarter, scoring 22 points in the first eight minutes, led by Dalton Bruner’s nine points. The Colts were up nine points after one quarter, but Young didn’t call a timeout.

“All year long, we haven’t called timeouts early in games,” Young said. “People are going to make runs, we’ve just gotta fight through it. I think our kids did a good job not panicking. You’ve gotta give West Jessamine credit, we knew what this game was going to be. It’s exactly what we thought it would be.”

Foul trouble for the Colts and some improved Mercer defense in the second quarter put the score at 27-23 West at halftime.

“I thought our defense for most of the night was really good,” West coach Damon Kelley said. “We started out on fire offensively, we got in foul trouble in the second quarter and our guys that were in there struggled to put the ball in the hole but they did a good enough job defensively to maintain the lead.”

Those players who struggled in the second quarter came out on a mission in the third for West: Eight different players scored in the third quarter as the Colts racked up 26 points.

Although West had a 12-point edge, the game was back to being played at Mercer’s tempo.

“It’s about getting the pace up and down like the way we want,” Young said. “We try to rely on wearing people out, and hopefully that might affect their shots in the second half. Our kids did a great job, we did not play well offensively tonight at all. We’re one of the top teams in the state in free-throw shooting, and I don’t know what’s happened to us, it’s just one of those funks that we’re in. But I thought defensively we did a great job.”

Mercer’s defense and Gillis on the glass helped the Titans take over in the fourth quarter.

“He’s been there for us all year long,” Young said. “He’s one of the toughest kids I’ve ever coached. He deserves that success. I don’t think we did a great job of getting him the basketball. That shows what type of kid he is — he went up and got most of those buckets on his own. He willed himself to those buckets. That’s just showing he’s a big time player and we expect great things from him.”

Kelley said his team struggled to match the Titans’ intensity in the final eight minutes.

“I don’t think we let up, I just think Mercer raised their intensity level on the offensive glass, on the defensive end of the floor,” he said. “We didn’t let up, we just didn’t fight at that same level to get the defensive rebounds. Gillis really hurt us on the glass. Obviously Trevon is a great player and you know he’s going to get his points, but I thought all in all we did a good job on him tonight. The offense just evaporated for us as their intensity picked up. We struggled to get clean looks, we struggled to take care of the basketball.

“We can be a really good basketball team, we’ve had flashes lately of putting it together for four quarters, just didn’t do that tonight.”

Part of West’s struggles came when Bruner, the starting point guard, went out with an injury early in the second half. Kelley was hopeful he’d be back for the 12th Region tournament.

With Mercer’s victory, the Titans will face a district runner up in the first round of the region tournament. Young said his team will have to play with that same fourth-quarter intensity for a full 32 minutes if they want to repeat as region champions.

“I think we’re going to have to guard the way we did in the fourth quarter with that sense of urgency,” he said. “There’s too many good teams in this region that can make plays. And then we’re going to have to do a better job offensively, we’ve got to make our free throws and we’ve got to get back up to 75, 80 percent from the line, and I think our offense was a little stagnant, but that’s a credit to West Jessamine, too.

“I think every night it’s going to be a battle. It’s going to be exciting for the fans. Everybody told me it was a tough region, but I didn’t realize how tough it was. It’s a great region, there’s some great players and every team that is in it really has a chance to pull an upset every single night.”