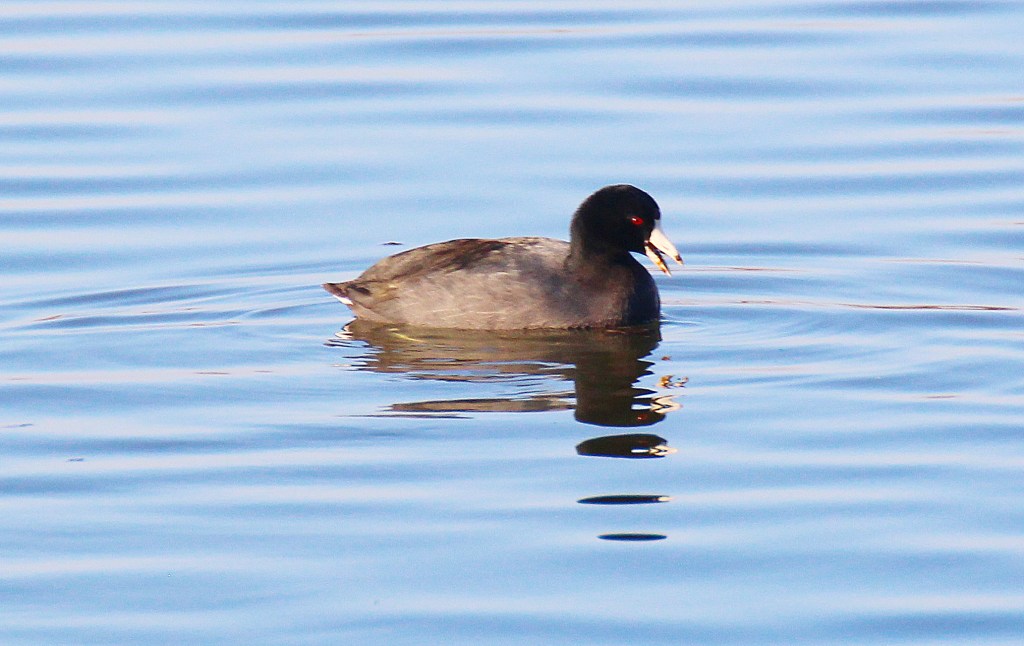 Ben Kleppinger/ben.kleppinger@amnews.com | An American coot, which looks like a duck but is not actually a duck, swims on Lake Reba in Richmond last week.

The Great Backyard Bird Count (GBBC) happens every February. It’s an opportunity for even the most casual birder to help create a real-time snapshot of bird populations. All that’s required is to take at least 15 minutes in a single location and count how many birds you see and of what species.

When assembled together into a massive, global visual, these snapshots help researchers see where different kinds of birds are. This information can help us know more about animal behavior, and how we can help protect them.

This year, the GBBC was from Feb. 17 to Feb. 20. If you participated in the count, you have until March 1 to submit your numbers.

This year, my husband and I took two of my nieces and one of my nephews to Lake Reba in Richmond to participate in the GBBC.

This is one of my favorite parks and it’s always good for birding. This year, I’m going to share my GBBC birding list with you and tell you a little about the different birds we saw.

While often mistaken for ducks, the American coot is actually not a duck at all. They are more closely related to Sandhill Cranes. Even though they are not related to ducks, they will often swim around with ducks.

They are very distinct birds because they are dark gray or black in color, with a white beak and red eyes.

We saw a ton of these non-ducks swimming around on the lake while we sat on a bench and watched.

The belted kingfisher can often be found flying up and down the shoreline searching for its prey. It feeds mostly on fish and crayfish and will dive to catch it. While I have not seen many in my life, the belted kingfisher is not a rare bird in Kentucky.

They are fast movers, but if you have binoculars or can snap a photo of one, it’s easy to tell the male apart from the female. The male has one blue band across his white breast, while the females have both a blue and a brown band.

We spotted our kingfisher on the other side of the lake from us, and used a photo from our camera to confirm its identity.

Mallards are very recognizable and very common in Kentucky. The males are very distinct with their green heads, while the females are harder to identify because they have brown speckled heads instead of green. If you see several male mallards together and there are some birds that look like mallards with brown speckled heads, they are probably female mallards. Almost all domestic ducks come from mallards.

The three we saw came flying in to the area together and made a semi-circle of the lake edge before landing on the lake out of our sight.

Robins are very distinctive with their orange breast and are easily identified. They are one of the first birds we see after the winter, and are often seen pecking around in the grass looking for worms. They are the largest member of the thrush family, in North America.

These birds compete with native species for resources and are known to be aggressive. They have been in America since 1890 and efforts to decrease their populations have not been effective. Even though they are invasive, they are pretty, dark birds with white spots in the winter and iridescent purples, blues and greens in the summer.

It was a lot of fun looking for birds and then identifying birds. We had a great time educating my nieces and nephew on how to tell different kinds of birds apart. It’s always a great opportunity to help do research and be citizen scientists. If you didn’t get a chance to participate, don’t worry: The GBBC happens every year in February.

Visual art, music collide with best of the blues…