Robert “Bob” William Nutter, 87, of Danville passed away Friday, February 24, 2017. Born March 28, 1929 in Harrisville, West Virginia, he was the son of the late Sadie Stalnaker and Harley Nutter. 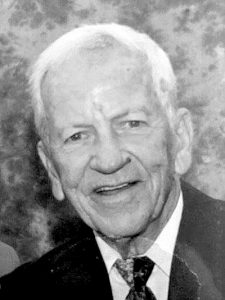 Bob was a retired technician for the United States Navy, worked as a Navy recruiter and occupational tax administrator, delivered flowers for Town & Country Florist, was a member of the Franklin Masonic Lodge #28 in Danville, worked for several local funeral homes, kept the scoreboard for the Danville Admirals for 38 years and was an avid Danville and UK sports fan. He was a business administrator and deacon at First Baptist Church of Danville. He also enjoyed hanging out at Sparky Turner’s garage.

He is survived by his wife of 60 years, Joretta Law Nutter; a son, Dean (Jackie) Nutter of Pittsburgh; a son-in-law, Steven King of Danville; 2 granddaughters, Sara (Dustin) Nutter-Getter and Kendra (Matthew) Grimes; and 1 step-grandson, Connor Huston. He was preceded in death by a daughter, Janalie King, and his six siblings.

A funeral service will be held at First Baptist Church, 1570 N. Danville Bypass, Danville, KY on Tuesday at 11:00 a.m. by Dr. Tim Mathis with burial in Camp Nelson National Cemetery. Visitation will be 6-8 PM on Monday at the church.

W.L. Pruitt Funeral Home in Moreland is in charge of his arrangements. Guestbook is available at www.wlpruitt.com.