‘The Other Mozart’ — Musical genius, intrigue comes to Norton in piece by Sylvia Milo 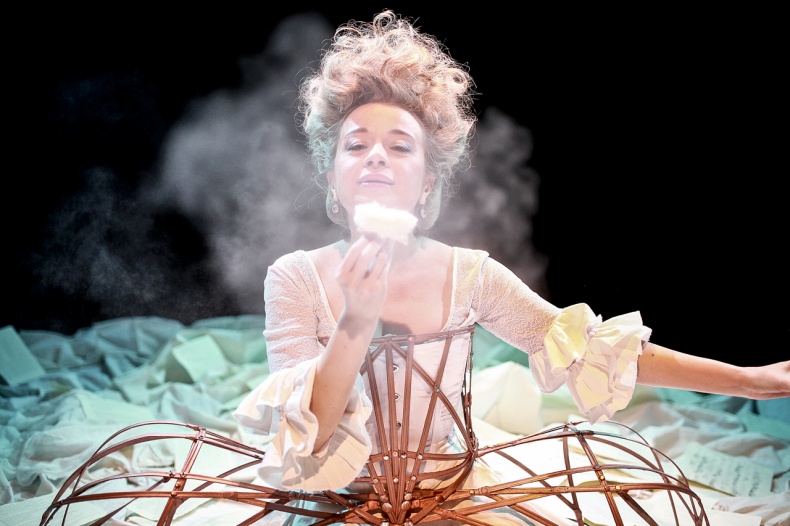 One prodigy went down in history. The other faded into obscurity. Acclaimed as “strikingly beautiful” by the New York Times, the true, littleknown story of Mozart’s prodigy sister comes to life in “The Other Mozart,” a dramatic solo theatrical event written by Sylvia Milo and directed by Isaac Byrne, which will be presented at Centre College’s Norton Center for the Arts on March 10.

Nannerl Mozart was a child musical genius, a keyboard virtuoso and composer, who performed throughout Europe with her brother to equal acclaim, but whose work and story faded away, lost to history as she acceded to the role of wife and mother, according to the social dictates of her time. Set in and on a sweeping 18-foot dress (designed by Magdalena Dabrowska from the National Theater of Poland), and amidst the Enlightenment and a climate of great social change that still resonates today, the play is based on facts, stories and lines pulled directly from the Mozart family’s humorous and heartbreaking letters. Along with music composed by her famous brother and Marianna Martines (a female composer who inspired Nannerl), original music was written for the play by Nathan Davis and Phyllis Chen (of Lincoln Center’s Mostly Mozart Festival and the International Contemporary Ensemble) using clavichords, music boxes, bells, teacups, and fans.

“Many of us recall the unconventional, and perhaps zany, life of Wolfgang “Wolfie” Amadeus Mozart through the popular film, “Amadeus,” said Norton Center executive director Steve Hoffman.  “Through this one-woman play, researched and written by the performing actress, we learn why Nannerl Mozart was often left out of the glory and fame.  With humor, striking visuals, and great storytelling, this play will leave audiences transported into a world of outsized beauty and delight.”

The Other Mozart was developed at the Piccolo Spoleto festival and at the Cherry Lane Theatre in NYC as part of their All for One Festival. It was presented at the Berkshire Fringe in 2013 and in Austria, where it repeatedly returned in 2014 at the invitation of the Mozarteum Foundation and Mozarteum University in Salzburg. It has received two New York Innovative Theatre Awards, and Drama Desk, and off-Broadway Alliance Award nominations.

Originally from Poland, now based in NYC, Sylvia Milo is an actress, playwright and producer. Milo opened “The Other Mozart,” in a critically acclaimed Off-Broadway run at HERE Arts Center in NYC, and is currently touring in the U.S. and in Europe. She played Bob Dylan in the OBIE Award-winning “The West Village Fragments” by Peculiar Works; Ophelia in “The Ophelia Landscape” with Mira Furlan at the Mark Morris Center; and Hamlet in “Hamlet,” an all-female version of the play, which she adapted and directed herself; among other roles.

The Other Mozart, starring Sylvia Milo, will be performed at Centre College’s Norton Center for the Arts 8 p.m. Friday, March 10 in Weisiger Theater. Tickets are priced at $38 and $49, and are available at NortonCenter.com or by calling the box office at (859) 236-4692.