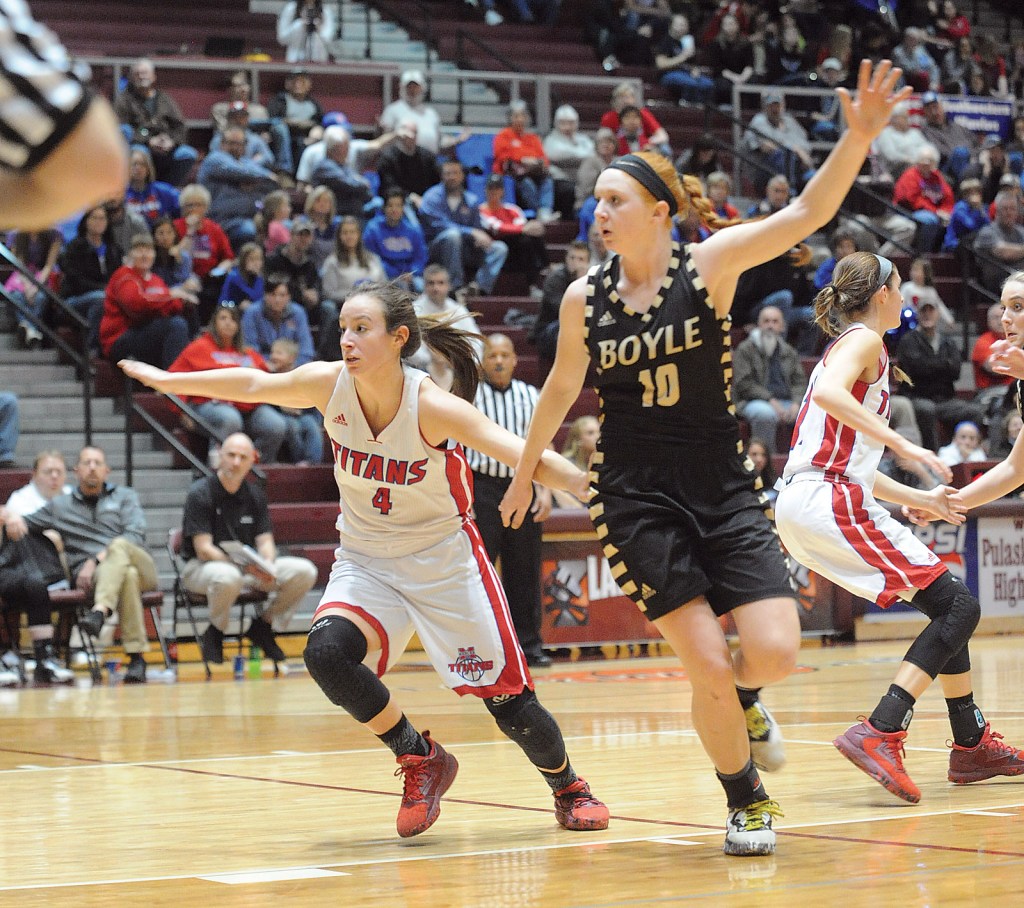 SOMERSET — The last team anyone in the 12th Region tournament girls bracket wanted to draw right out of the gates was Mercer County. The Titans are the defending champions and the favorite to do it again this year.

As a decided lack of luck would have it, Boyle County drew the short straw and faced the Titans in the opening game of the tournament Monday at Pulaski County.

And despite a quick start from the Rebels and some runs during the game to hang close to Mercer, the Titans eventually did what they’ve done to so many teams this year — roll to an overwhelming 90-68 win.

“They’re a tough team to play, they do a lot of stuff really well,” Boyle coach Greg Edwards said. “… Going into the tournament, I felt if we didn’t draw them, we had a chance to meet them in the final. But that’s what happens when you don’t win the district.”

The Titans (25-6) move on to face Southwestern at 6 p.m. Friday in the first semifinal. Mercer beat the Warriors 96-67 on February 17 in Harrodsburg. 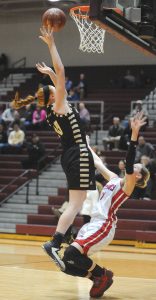 The matchup provided a refreshing and welcomed challenge for Mercer, squaring off against Boyle and its star player, Emmie Harris. Earlier this year, she became the program’s all-time leading scorer and was named the region’s player of the year, so Titans coach Chris Souder knew what was awaiting his team, saying Boyle was “by far the best” of the district runners-up in the region field.

“We don’t play them during the season so (my players) hadn’t seen her length, and I told them she was the best I’ve ever seen at snagging passes in the air and the passing lane,” Souder said. “It was good for us because you’ve got to pay a little more attention, you’ve got to move the ball.

“Greg is a great friend of mine and I thought he did a great job. His kids were ready and prepared. But I knew he would, I knew he would have his kids ready. … Here two or three weeks ago, we thought Boyle was the second best team in the region.”

This was the first game during the postseason where Mercer’s starters played a full game, beating Burgin and West Jessamine by an average of 47 points en route to the 46th District championship.

Add to that the fact Mercer hasn’t been in school since the middle of last week, and Souder saw the effect on the floor during Monday’s game.

“I thought we looked a little lethargic,” Souder said. “Not that we weren’t into the game, but we were out of our routine, and I’m big on kids are their best when they’re in a routine. That’s why I wanted to draw Monday because if we drew Tuesday, that’s our first day back in school and I was afraid we’d be really tired. Now we don’t play until Friday and we have three days to get back into a routine.”

Early on, it looked as though Harris was going to carry Boyle to the upset. She scored seven points on a pair of free throws, a field goal and a 3-pointer to stake the Rebels to a 7-0 lead.

Harris finished with a game-high 35 points, including three 3s and an 8-of-9 mark at the free throw line.

“Her competition and her drive are just off the charts,” Edwards said. “She’s probably got more of an all-around game than most people in the state of Kentucky.”

But it wasn’t long before the Titans’ defense started clamping down, and their offense followed suit. Lexy Lake and Emma Davis hit back-to-back 3-pointers, and after Boyle’s Gracie Edmiston made a 2-pointer, Seygan Robins drilled her first of three 3-pointers for a 13-9 lead.

“We came out, I can’t decide if it was flat or what it is, but Boyle was ready to play,” Souder said. “We just shot the ball awfully well. Anytime you zone us like that, we’re not going to stop shooting.

“After we scored a little bit, our defense got going and they started with the pressure. It speeds you up and wears you down.” 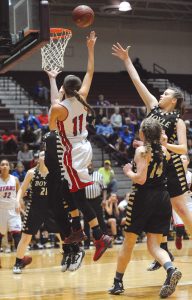 The Titans kept coming in waves, ending the first quarter up 25-17. Lyric Houston had seven of her team-leading 20 points in the second quarter as the Titans went into the locker room up 54-38.

“The thing about Mercer is, they do such a good job putting pressure on you, at some point in the game, they have two or three runs,” Edwards said.

“That’s why it’s hard to guard us because we’re not just Seygan,” Souder said.

Edmiston added 18 points for the Rebels, who finished the season with an 18-15 record.