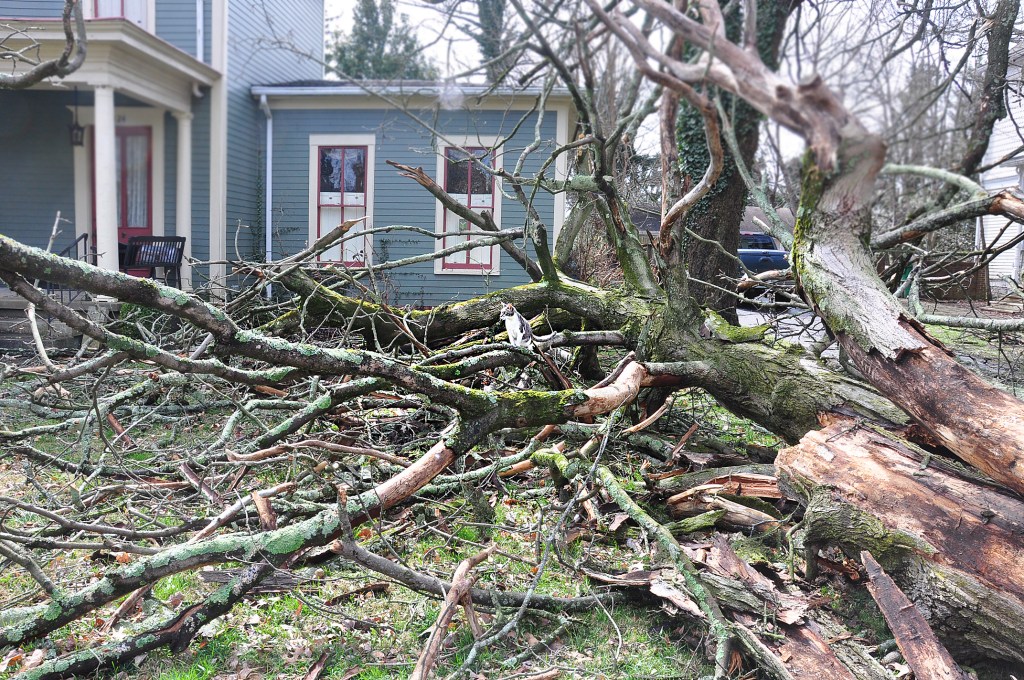 Robin Hart rhart@amnews.com During Wednesday morning’s storm, the top half of a large old tree was blown down into a yard on Broadway. Julie Graham, who lives next door, said she and her husband Buck heard a noise when it fell, but didn’t realize it was the tree. She said they were very lucky that the tree didn’t fall onto their cars or the house. Sookie, the Graham’s cat, took advantage of the situation and seemed to enjoy exploring the mangled branches.

There were some downed trees and limbs throughout different parts of the county: West Ila Avenue in Junction City, U.S. 68 in western Boyle County and downtown Danville, on Broadway.

There were power outages for some InterCounty Energy customers from about 6 a.m. until about 9 a.m., and about 15 Kentucky Utilities customers lost power during the day, which was restored by 2:30 p.m.

Wilder said there were 30-40 mile an hour wind gusts, but those weren’t sustained speeds.

“If that had been continuous, it would have been worse,” he said.

A tornado watch was issued for the county, along with a severe thunderstorm warning, which was extended, and a flash flood watch, which was cancelled. About 8 a.m., he said, the radar “looked hideous.”

“We were so fortunate,” Wilder said.

Neighboring counties were not so lucky, with Mercer sustaining some of the worst damage.

“I’ve not heard officially, but I feel like a tornado touched down,” said Mercer County Judge-Executive Milward Dedman.

Coming from the west, the damage started at the Anderson Dean Park, where the roofs were blown off of buildings. It traveled across Warwick Road, toward U.S. 68/Lexington Road, and ending up near Handy Pike.

Dedman, who owns a farm on U.S. 68/Lexington Road, said he, too, sustained property damage, losing a barn, a shed and part of a tree in the morning storms.

“It picked up the machinery shed as if it had never been there and left everything inside it alone,” he said.

He also lost electricity when a line snapped.

Overall, Dedman said, the bulk of the damage appeared to be downed power lines and trees, barns being knocked over and roofs being taken off of buildings. An SUV was damaged when a limb fell on it. The couple in it sustained only minor injuries, according to the Mercer County Sheriff’s Office.

Clean up is already beginning at the park, he said — an insurance adjuster has already inspected the building there and someone was sent to create a temporary fix in case of more rain.

Weather events like Wednesday reiterate the importance of being prepared, Wilder said, and at 10:07 a.m. Friday,  there will be a statewide tornado drill, providing a perfect opportunity to plan for such an emergency.