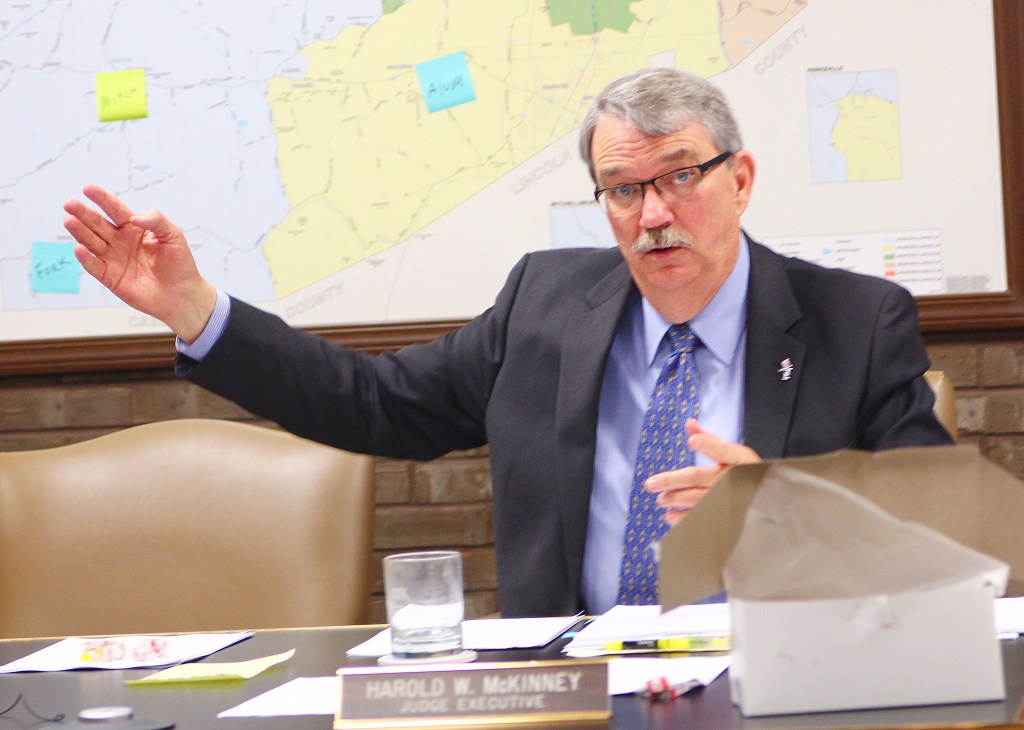 Overcrowding is so bad at the facility that dozens of inmates are having to sleep on the floor of the jail’s indoor recreation area, creating a “huge security risk,” Boyle County Jailer Barry Harmon said Tuesday.

“Our indoor rec has no restrooms or showers,” Harmon said, explaining that the inmates housed there must be escorted out of the area to restrooms whenever they need a bathroom. “When they can’t go, they go. These conditions are not acceptable, period.”

Harmon said Boyle County can opt to build restrooms and showers in the recreation area, but it has to be done the right way with state approval. The area cannot be reclassified as bedding space and the jail cannot add any beds in the area because regulations say “if we did that, then we have to renovate the whole jail,” he explained.

Magistrate Jack Hendricks said he thinks getting showers and restrooms installed should be a top priority.

“We put our people in jeopardy by not going this immediately,” he said. “We need to get the bids and get it done.”

Harmon said completing the construction would require getting a plan approved by the state and finding a state-qualified contractor to complete the work. He was unsure what the timeline for the project might look like.

Beyond that temporary fix, Boyle County has put out a request for qualifications, seeking companies to study and develop a plan for a new jail facility, Harmon said.

That process is going to be much lengthier than officials initially had hoped — it may be nine months before the “RFQ” step is complete and the county can put out an “RFP” (request for proposals) seeking contractors to build whatever facility is recommended, Harmon said.

In the meantime, the record levels of incarceration are leaving the jail packed far beyond its capacity of 220 beds every day.

The stress has affected staffing levels, too.

“We’ve had three (deputy jailers) quit and they just simply said, ‘I can’t do this no more,’” Harmon said.

The three have quit since Jan. 1, with two of them quitting in “the past two weeks,” he said.

“That’s when I called the Judge(-Executive Harold McKinney) and Richard Campbell (county attorney) and I said, ‘We’ve got to do something. We can’t take another person; we don’t have space nowhere,” Harmon said Tuesday.

Harmon and two jail employees selected 15 prisoners from the population list who don’t have medical issues or problematic court dates and transported them to Casey County’s jail for holding.

That was as many as Casey County Jailer Tommy Miller could take — his jail was already at 122 percent capacity before accepting the additional Boyle County inmates, Harmon said.

Since Sunday, the number of inmates in the Boyle jail has declined, thanks in part to the launch of the jail’s intensive outpatient (IOP) drug rehabilitation program, which lets the court system identify inmates for release while they participate in the program. So far, 18 inmates have qualified and been released to participate — 17 on Monday and one on Tuesday, Harmon said. He’s hopeful another 20 can be added to the program by the end of this week. The program is run by Shepherd’s House out of the old Red Cross building on Third Street.

“We’re at 370 inmates this morning,” Harmon told Boyle County magistrates Tuesday. “We have 200 Boyle, 78 Mercer and also there’s about 10 or 12 state inmates involved.”

Harmon said one event that led to the peak of 402 inmates was the handing down of a large number of indictments in Boyle County, but he was clear he wasn’t saying that meant the indictments shouldn’t have been pursued.

Last Thursday, the Boyle County Sheriff’s Office and Danville Police Department coordinated a round-up of 16 alleged drug traffickers. Officials have touted it as a response to the current opioid epidemic that’s causing a rise in overdoses and possible overdose deaths.

“Our law enforcement did what they needed to do,” Harmon said. “It needed to be done.”

Boyle County magistrates John Caywood and Phil Sammons said they would like to see judges try to keep more people out of jail to help with the problem.

“It’s more than just the sheriff and the jailer that’s involved in this process, so let’s not forget the total picture,” Caywood said. 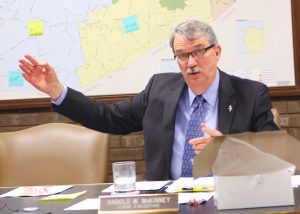 Caywood asked if Boyle County Fiscal Court is doing absolutely everything it can to fix the jail problem. McKinney said he thinks it is, citing the intensive outpatient program and using Casey County as a “relief valve.”

Kentucky has shifted the burden of incarceration more and more “into the laps” of local government, even when local governments are already out of resources, Hackley said.

For one thing, the legislature has caused the number of people incarcerated for lapses in child support payments to go through the roof, he said.

In the early 2000s, the state passed legislation shifting incarceration responsibility for many misdemeanor offenses for possession of small amounts of drugs to local governments, he said.

“In 2005, the Lincoln jail was profitable. It left that pretty quickly — now hundreds of thousands are spent for incarceration,” he said. “Every county is facing the same stress.”