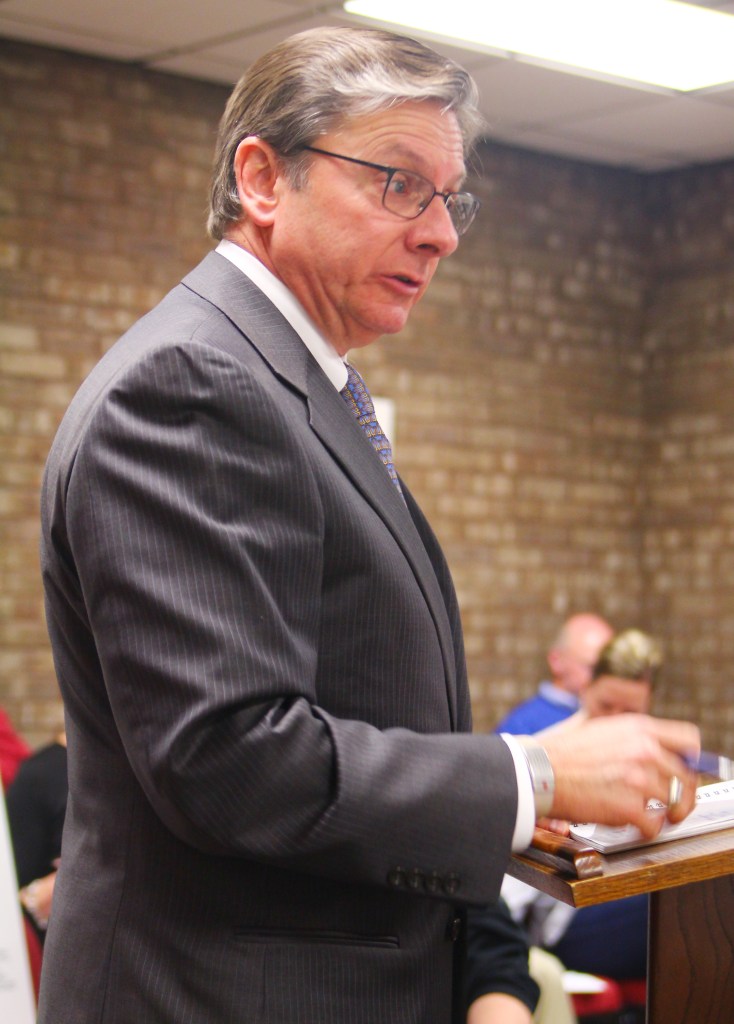 “I come in peace — the thunder is outside, not inside,” Perros said. “… I come in the spirit of hope, love and understanding.” 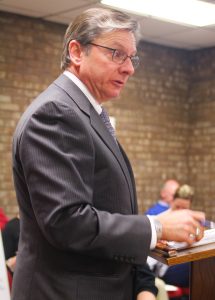 Perros came to the Fiscal Court meeting with Danville commissioners Rick Serres and Denise Terry and Danville City Manager Ron Scott to argue the city’s case for the need to spend $50,000 re-assessing the area’s parks and recreation needs.

“I am here at the request of the city commission to seek a broader discussion today that hopefully will lead to a broader decision in our tomorrows,” Perros said. “Some 20 years ago, these two governments joined hands and courageously started Millennium Park. This took foresight, it took forethought and it took professional planning.

“The city commission believes that we are at another point in time with Millennium that requires further foresight, forethought and professional planning.”

Perros said the city commission “understands and respects” Boyle County’s “future financial burdens” in dealing with the over-capacity detention center. The city has its own financial concerns — it recently identified $50 million in “capital expenditure needs — not wants” that it must address in the next few years, he said.

“We understand the challenge, we feel your pain, we struggle with the same issues of how do we accomplish our goals?” he said. “So the challenge for both of us is how do we address future needs in light of present obligations? In our opinion, there’s only one logical, methodical way and that is to plan … with precision what our future costs might be so we can responsibly budget for them, whether that means we budget for them tomorrow, or next year or even further in the future.”

Perros said “we owe it to our taxpayers” to plan for area parks in a responsible and efficient way. The two governments need to know what kinds of programs and facilities will be used by “current and future residents” so that money can be spent as wisely as possible.

Commissioner Serres followed Perros with a plea that magistrates think about the need to make sure area parks are a draw for people who want to raise their kids somewhere nice. 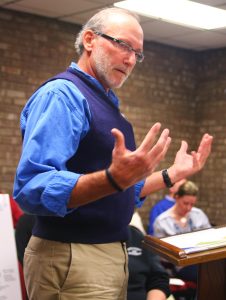 “Even though I’m an old guy, I try to think about those young folks coming up and where we need to be,” Serres said. “It’s an expenditure I hope we can share.”

Serres told magistrates he is “the reason we’re here” to talk about jointly funding the study to create a new parks master plan.

“I’m the reason we’re here today because I tabled — I tabled a motion to go ahead and vote on spending the $50,000 for the study because I felt like I didn’t want to leave our partners out without giving them some time to think about it. So we’re asking you to give it some deep thought. We want to move together, forward.”

Magistrates Phil Sammons, Jack Hendricks, Patty Burke and Donnie Coffman said they think there are more than enough funding needs for Millennium Park that have already been identified and those should be taken care of before any money is spent looking further down the road.

Hendricks cited a list of 13 Millennium Park “capital projects” that have not yet been funded or implemented. The list totals $910,000 in expenses. 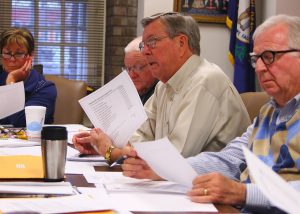 Ben Kleppinger/ben.kleppinger@amnews.com
Magistrate Jack Hendricks, center, holds up a list of 13 capital projects proposed for Millennium Park that would cost an estimated total of $910,000 to complete.

“I can agree with at least half of the things on this sheet very easily. I don’t need anybody from Lexington to tell us what we need to do on these issues,” Hendricks said. “Now, if we want to come up with $450,000 apiece or we want to do these right away then yeah, next year, I say maybe we do need a survey. But I firmly feel we’re not at that point yet when we have so much to catch up on.”

Magistrate Dickie Mayes said he thinks any study ought to “include the whole county” and consider the needs of people in outlying areas, “not just what the elite want.”

Magistrate John Caywood pointed out that the $910,000 figure is in question because there are items on the list, which was created based in part off of the 20-year-old master plan, that are no longer needed or wouldn’t work. The plan for an amphitheater, for example, is estimated to cost $175,000. 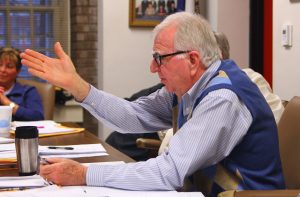 “Do we really need it? This is a substantial number that’s part of this budget you presented. So right there, $175,000 is probably in question as to whether it’s really needed.”

Other items on the list include $200,000 for “multi-purpose shelter/indoor community room/additional restrooms,” $120,000 for lighted tennis courts and $160,000 to repave all trails.

“That’s what happens as things morph and you don’t stay on top of a plan,” he said.

Perros noted that developing a new master plan would cost $25,000 to each government.

“I think we can discuss it further in our ad hoc committee,” Hendricks said. “We’ve got an excellent relationship going; we’ve got excellent planning sessions going and those type of things can be discussed and we can come up with our own plan first to at least relieve some of these issues.”

Those discussions may lead the the ad hoc committee recommending the city and county spend more than the current $100,000 a year on parks improvements, Hendricks said.

“I don’t have a problem with that as long as we’re taking care of the issues we already know we have to upgrade our park, because that is a jewel and we want to keep it a jewel,” he said.

Judge-Executive Harold McKinney agreed with Perros’ characterization of the disagreement as a “timing issue.”

“We probably need to do this at some point; I don’t think it’s the time right now,” he said. “… We’re just at different points on the continuum I think, but I appreciate our continuing working relationship and we’ll continue to work through the ad hoc committee.” 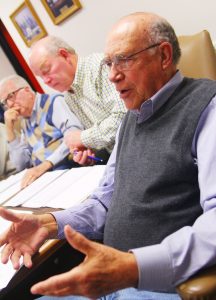 Ben Kleppinger/ben.kleppinger@amnews.com
Magistrate Phil Sammons questions the need for a $50,000 study to create a new parks master plan when hundreds of thousands in improvements to Millennium Park have already been identified.