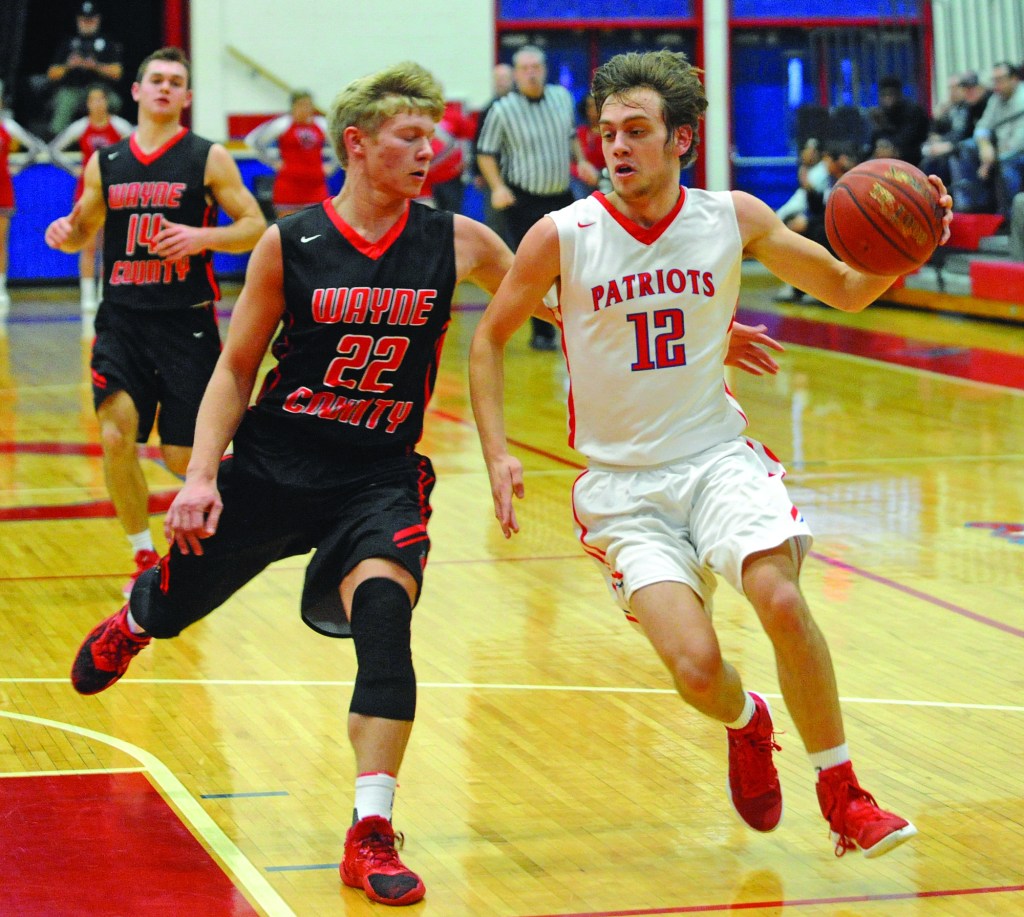 STANFORD — It was a battle to the final buzzer in the first game of the Boys’ 12th Region tournament Wednesday at Lincoln County as Wayne County took on the home team.

Early in the regular season, the Patriots defeated the Cardinals on their home court, but they couldn’t repeat in Wednesday’s rematch as Wayne pulled out a come-from-behind 48-45 victory and knocked the home team out of title contention.

“We didn’t come out and have an ‘A’ game and when you get to this point of the year you’ve got to have your ‘A’ game,” Lincoln coach Jeff Jackson said. “We had several opportunities, but we didn’t have an ‘A’ game.”

Things started slow for the Patriots, who didn’t break onto the scoreboard until the 6-minute, 20-second mark of the first quarter, but they used a 9-3 run to turn a 9-7 deficit into a 16-12 lead then maintained their lead for most of the game.

That is until the third quarter when the Cardinals took flight, using a 17-5 scoring run to set them on course for the win.

Aubrey Weaver, who had a game-high 17 points, hit from 3-points out for Wayne’s only points of the third period to ignite the run. He would score a total of nine points before the run ended. Jakson Baker added four points, including a tipin to put the Cardinals (17-16) on top, then Kameron Gehring followed with his only bucket of the game for their biggest lead of the night, 39-35.

Devin Alcorn and Carlos Nunez both hit a 3-pointer in the closing minutes, and Chase Phillips and Nunez also got a bucket apiece in the paint to keep the Patriots within striking distance.

Wayne, which finished 11-for-18 from the foul line, would use the free throw line to hold Lincoln at bay, though, sinking 7 of 10 free throw attempts in the final two minutes.

Noah Young, who led Lincoln with 16 points, gave the Patriots a shot at a tie by getting a 3-point attempt off just before the final buzzer, but the shot wouldn’t fall.

“We had several opportunities, and we’re up 32-25 going into the fourth quarter. We had a couple open looks, good shots and they didn’t go in,” Jackson said. “You let a team like Wayne make a play or two and hang around and get in it and they can get you. They made plays down the stretch tonight and we didn’t.”

Alcorn, who finished with 15 points and four steals, ended Lincoln’s scoring drought to open the game, going baseline for a bucket then nailing a 3-pointer for a 5-4 Pat lead. Logan Brett, who had 13 points for Wayne, hit inside and Stetson Simpson got a trey to give the edge to the Cardinals.

Young scored half of his 16 points in the first quarter, including six straight points to push Lincoln back ahead 13-9. Alcorn hit again late and Blake Smith sank a free throw for a 16-12 lead at the end of the first.

Six points was Lincoln’s largest lead of the second quarter. Alcorn tallied first for the Pats in the second then Tanner McAninch grabbed a defensive rebound and took it to the hoop for the 20-14 score.

There would be four ties in the ball game, with two coming in the second quarter. Baker hit a 3-pointer with 4:00 left in the first half to tie the game at 20-all and Weaver hit inside with 1:54 to go for a 22-22 deadlock.

Lincoln, which led 25-22 at the half, posted its biggest lead of the game with 5:50 showing in the third quarter. Young bombed in a 3-pointer to open the second half then followed with a layup for the 30-22 margin before Wayne rallied.

“Rebounding was big tonight,” Jackson said. “They outrebounded us 12 (27-15) and had eight offensive rebounds. You’ve got to give them credit. We didn’t have an ‘A’ game. I didn’t have our team prepared for an ‘A’ game.”

For Wayne, the season continues as the Cardinals advance to the semifinal round on Monday night, where they’ll face Mercer County at 6 p.m. The Titans beat Rockcastle County 72-62 in Wednesday’s late game.

For Lincoln and it’s four seniors — Alcorn, McAninch, Nunez and Young — the season has reached its end.

“I’m disappointed for the team and especially our seniors,” Jackson said. “Love our seniors. They won four district championships. They are the winningest class since I’ve been here, with 90-some wins overall. Great group of kids to coach. I’m proud of them. I hurt for them really, really bad right now. They are a very special group. They’ve been a lot of fun to coach and a lot of fun to be around.”