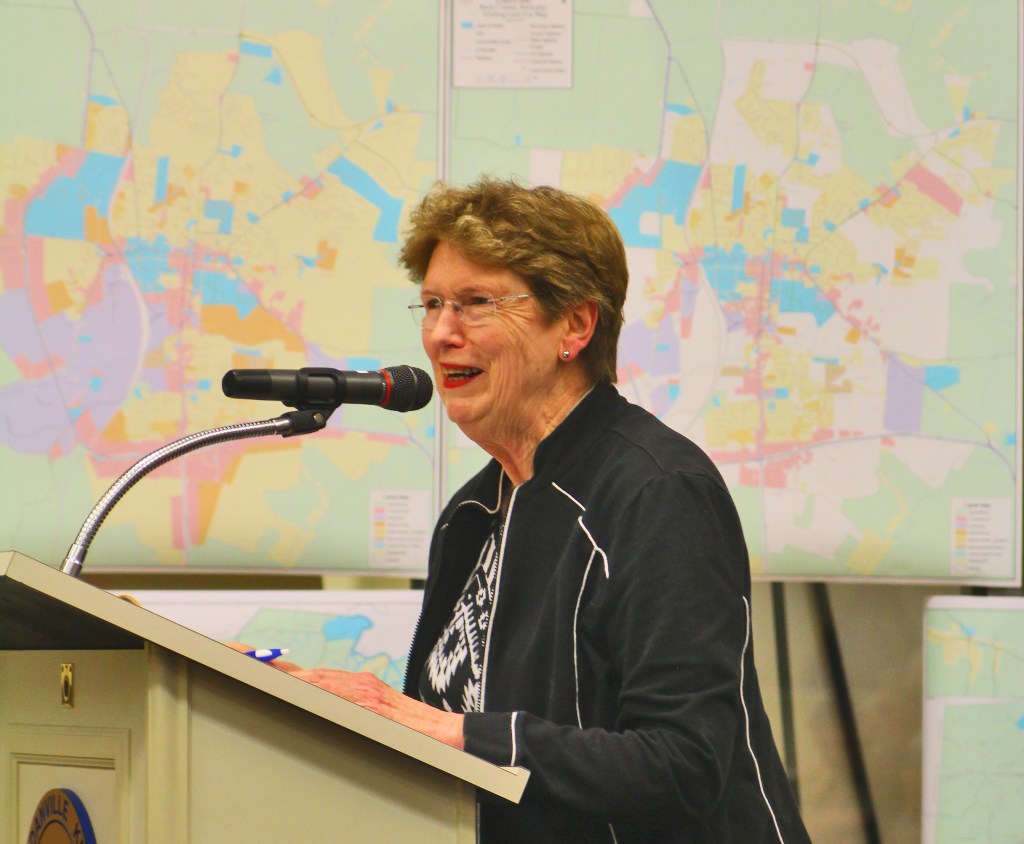 Ben Kleppinger/ben.kleppinger@amnews.com With land use maps on display behind her, Sarah Vahlkamp with Smart Growth Boyle speaks in favor of the 2017 Danville-Boyle County Comprehensive Plan. The plan was approved unanimously by Planning and Zoning Wednesday morning.

Planning and Zoning has completed its years-long project of creating a new comprehensive plan for Danville and Boyle County.

The Planning and Zoning Commission unanimously approved the 10-chapter comprehensive plan and accompanying future land use map at its meeting Wednesday morning.

That made many in the audience from the group Smart Growth Boyle very happy.

The last time P&Z completed a comprehensive plan was in 2007. Plans are supposed to be updated every five years. 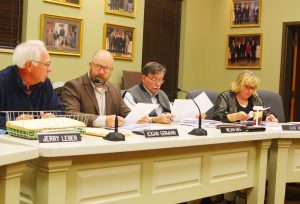 “We started with goals and objectives in 2012, so it has been a long process,” P&Z Director Paula Bary said during Wednesday’s meeting.

Bary said except for one outside contractor hired to create the massive future land use maps, all the rest of the work on the plan was done in-house. Everything in the plan and map is also online, available for anyone to review, she noted.

Vahlkamp was the only one to speak when P&Z Chairman Jerry Leber asked for public comments on the plan. No opposition to the plan was voiced at the meeting and no P&Z commissioners made any comments.

“I’ve read through it all, I’m sure many of you have, and I think it contains a wealth of pertinent information for future development, economic growth and protection of the environment and historic properties,” Vahlkamp said.

As approved, the future land use map leaves much of the land along a stretch of Ky. 2168 on the north side of Danville zoned for agricultural use. At one point, there had been a push to turn some of the land along that highway into commercial space.

“We realize this map has generated some controversy, but I would like to say that it seems to us the agricultural designation along the bypass does not prevent development because, as you’ve seen, a project can come up at any time and request a zone change,” Vahlkamp said to P&Z commissioners. “We’ve had many public hearings and you’ve heard a lot from the public, so let’s move forward.” 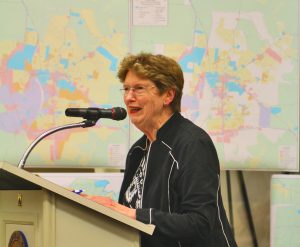 Ben Kleppinger/ben.kleppinger@amnews.com
With land use maps on display behind her, Sarah Vahlkamp with Smart Growth Boyle speaks in favor of the 2017 Danville-Boyle County Comprehensive Plan. The plan was approved unanimously by Planning and Zoning Wednesday morning.

Susan Nimocks, another member of Smart Growth Boyle, said members of the millennial generation are “much more interested in urban living than they are living out in a subdivision.” Growing the local economy by using existing spaces and buildings can help with preservation while also making Danville more attractive to millennials, she said.

Nimocks said supporters of the comprehensive plan are very pleased, “but not at the sacrifice of anybody.”

“When I say we’re happy, it’s been a long haul, but at the same time this is a small town and everyone that we deal with are friends,” she said. “… I always look at this as a business arrangement and not a personal thing. This is not a stopping of growth at all. As Sarah said, people can come before (P&Z) and rezone parcels just like they did today — and then (the comprehensive plan) will be reviewed again in five years.”

In other business, the commission approved a preliminary budget for the 2017-18 fiscal year that would keep contributions from local government flat and maintain Planning and Zoning’s current four-day work week.

“They’re still running about half of what they did prior to the recession when we were five days a week, so we feel we are still able to take care of our customers at four days a week,” Commissioner Terry Manon said.

The budget projects an increase in revenue of $12,000 and grows a reserve fund to $44,000. Bary said the budget will be presented to Danville and Boyle County for consideration in their budget processes. If approved, the budget will come back to P&Z for final review.

The 2017 Danville-Boyle County Comprehensive Plan is available in its entirety online at boyleky.com/planning-and-zoning.