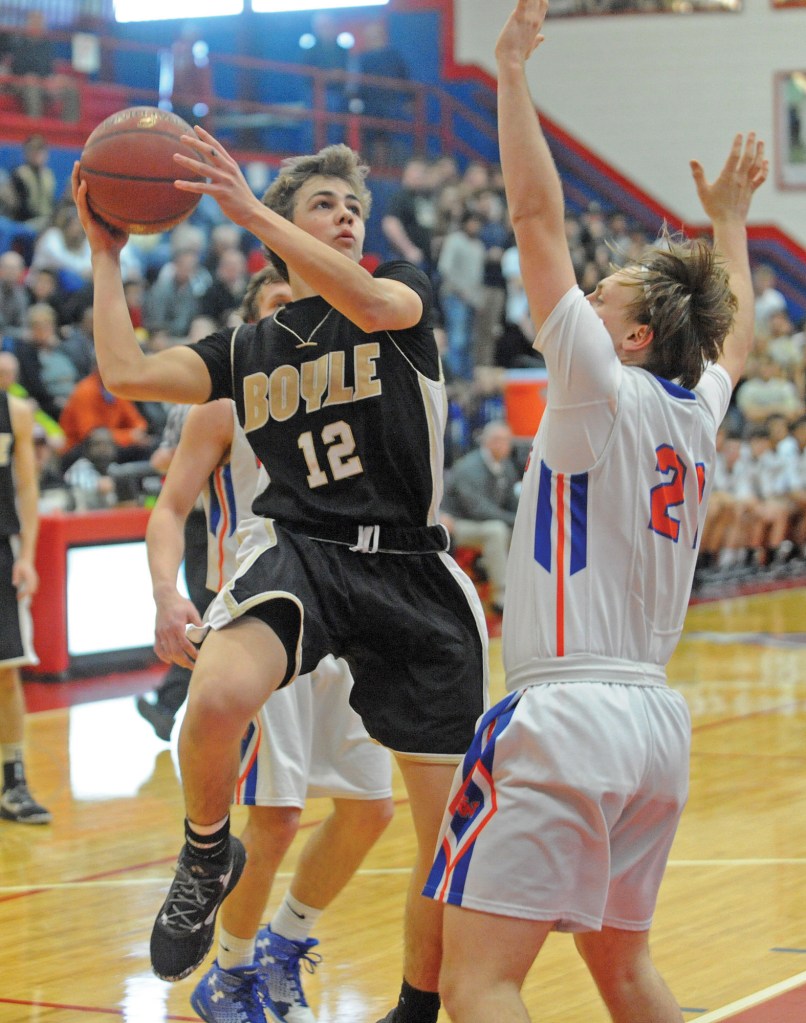 STANFORD — March is all about madness.

Boyle County provided the madness Thursday against Southwestern in the first round of the 12th Region tournament at Lincoln County.

Southwestern, the 48th District champion and one of the favorites to win the 12th Region tournament, couldn’t keep up with Boyle’s plays down the stretch as the Rebels squeezed out a 76-73 upset.

It’s the fourth year in a row Boyle has made the 12th Region tournament semifinals.

“The concentration, the determination, the work ethic that the kids had these past three days, they believed that if we did what we were trying to do, we could be successful,” Rebels’ coach Steve Adams said. “They worked really, really hard for three days and they carried it to the court. It wasn’t perfect by any stretch of the imagination, but we did what we needed to do, we never backed down and the kids did a great job.”

The Rebels had a near-perfect start to the game, going on a 17-1 run in the first quarter to take a 21-10 lead after eight minutes. Southwestern’s offense picked up in the second quarter, but Boyle held a six-point lead at halftime. The Rebels shot 61 percent in the first half, led by 12 points from Bryce Slone. Reese Smith and Jason Alexander each had nine first-half points.

Adams said he and his coaching staff made a small adjustment to the offense in preparation for the Warriors, who beat Boyle 83-61 earlier this season.

“We knew that if we attacked the basket and were patient, that they didn’t really want to guard,” he said. “They’d rather get it, run and shoot, try to outscore you. So we really wanted to make them guard, especially off of the dribble. So we did a few different things within our offense to give us more of those situations, and it really helped us.”

Boyle’s offense continued to keep pace with the highest-scoring team in the state in the third quarter, scoring 22 points to Southwestern’s 20.

Alexander credited the coaching staff for coming up with a strong game plan.

“I think coaches really got us ready,” he said. “We knew that if we executed the plan that we’d come out with a win. That’s what we did a pretty good job of tonight. We wanted to defend them so they didn’t have more than 10 (3-pointers). We think we executed really well, and the coaches prepared a great plan for us and we just executed it.”

Southwestern finished 5-for-22 from behind the arc, with top 12th Region scorer Peyton Gover finishing 14-for-31 from the floor with 37 points.

In the fourth quarter, Gover and Southwestern started to make a run. A Gover 3 cut the Rebels’ lead to three, 63-60, and the Warriors tied the game at 65-65 with four minutes left.

But Alexander said he and his teammates got together after a timeout to regroup.

“In the huddle, we were just saying that we came too far to let them come back and beat us,” he said. “We were winning the whole game, we knew that we worked too hard in these past few days getting ready for the moment. We were ready for that moment because that’s what we’ve been working for in practice, to dig deep in the fourth.

“We knew that they were going to have runs, they’re a great offensive team, we knew that. But we knew that, at that moment, we had to be the better team and step up when there’s two, three minutes left in the game.”

And the Rebels stepped up.

Starting center Will Bramel fouled out just before Southwestern tied the game, and senior Dylan Frederick came in and gave the Rebels a lift off of the bench.

“Not going to lie, with Big Will getting his fifth foul, we were kind of nervous,” Alexander said. “But Dylan came in and played some good defense. That’s what we are going to need if we’re going to keep winning. He was there for us, he showed his senior leadership and it went a long way.”

Adams said Frederick’s play was representative of the entire team’s effort throughout the week.

“He made two big free throws, had a couple blocks, couple rebounds,” Adams said. “I think that’s the thing that keeps our guys going. Like I told them after the game, even the JV guys that did a great job this week in practice simulating Southwestern helped us win this game. Dylan Frederick came in and played big. He just played hard, did everything that we asked him to do, kept his focus.”

Frederick said he just knew he needed to step up.

“Whenever Will got in foul trouble, I just had to come in, try my hardest,” he said. “I made a few mistakes but I think I did a few things too that helped us win the game.”

Slone hit a shot to give Boyle a 67-65 lead and Frederick made his first game-changing play of the night shortly after, blocking Southwestern’s Logan Dykes attempt to tie the game. Frederick came down with the rebound and Dykes fouled him, his fifth.

With Boyle in the bonus, Frederick hit both free throws to put the Rebels up 69-65.

“Those two free throws, I knew that I had to make them for us to stay in the game, stay ahead,” Frederick said. “That’s just what was going through my mind. With all the fans, friends, everybody cheering me on, I had to do it.”

Southwestern wouldn’t go away, and a Gover 3 tied the game at 73-73 with less than a minute left.

The big man set a screen for Alexander, who fought through a Southwestern trap to find Frederick under the basket for a score.

On Southwestern’s next possession, Frederick blocked Gover under the basket. Alexander hit one of two free throws with six seconds left. The Warriors’ final shot was off the mark, giving Boyle a court-storming win.

“I’m just real tired, but it was worth it,” he said. “Coach kept saying, his motto this week was ‘Play to see another possession.’ That’s just what we were doing, we were playing every possession like it was our last. We just wanted to make the semifinals because anything can happen in the semifinals.”

“We’re the ones that are spoiling the party,” Adams said. “We’ve got three days to prepare, get a little rest. We’re going to enjoy this one tonight, but tomorrow, we’re going to go to work on whoever we have the opportunity to play. We’re thankful for the opportunity and we’re just going to come out and play hard and see what happens.”