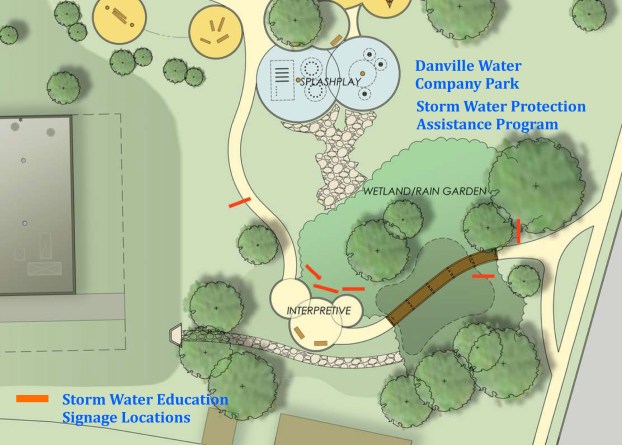 Graphic submitted A drawing shows the plan for an educational park at Danville’s water treatment plant.

Danville is seeking almost $47,000 in grant funding to expand an educational park project at the water treatment plant.

As part of the city’s upgrades to the water plant, it was already planning to install an educational area featuring a rain garden, City Engineer Earl Coffey said. The city is now attempting to essentially double the funding for that park area by putting the $46,932.22 budgeted up as matching funds and seeking a grant for the same amount from the Kentucky Division of Water’s Source Water Protection Assistance Program. 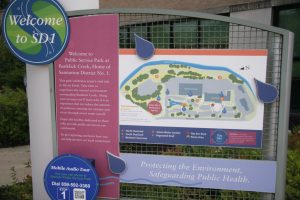 Photo submitted
Groups who hope to land the grant would like to install educational signs about the water cycle, like this one.

“We are eligible and have what we think is a good project in the water plant park in the water quality education area,” Coffey said. “… When it’s fully renovated, there will be a wetland/rain-garden area where we hope that education components can be installed.”

If successfully funded, the expanded educational area would serve as an anchor for a larger water education effort using signage throughout Danville and Boyle County’s trail systems.

“We hope to add — in the future — signage and education components so that when a student goes to the water plant and sees the education there … then as they get out and they’re accessing the community with their parents, they can identify where they’re at and they understand the local water cycle,” Coffey said.

Jennifer Kirchner with the Danville-Boyle County Trails Alliance said pursuit of the grant funding is a joint effort among many groups, including Danville, the Clarks Run Environmental Education Corporation (CREEC) and the Trails Alliance.

“All of this is under the effort to educate people about how our everyday habits influence our water quality. I think a lot of people don’t realize the little things that you do — the chemicals you put on your lawn — it all goes into our drinking water,” Kirchner said. “… It’s a fun project; it’s educational, it’s interactive and I think it adds to the general walkability of our community.”

Kirchner said there are plans to work with the local school systems to bring classes to the water plant once the upgrades are complete and the park is created for educational sessions. Teaching children about how the water cycle works — how water from the wastewater treatment plant and storm sewers winds up back in Lake Herrington, where it’s drawn back in to the water plant for use — will help them understand the importance of not harming the water supply, she said.

According to a draft of the grant application, which was filed by the March 1 deadline, “In Boyle County, the largest polluters of water today are not industrial sites with single-point pollution, but everyone else, including residents and small businesses.”

“This interactive program will begin at the Water Plant Park, which will include a rain garden or interpretive area and space conducive for large groups, such as students, to gather and learn about the ‘local’ water cycle,” the grant application reads. “… This educational opportunity will be extended to areas around town in areas of pedestrian interaction. For example, signs along Clarks Run Trail will convey where the user is within the local water cycle; immediately beside the creek where the riparian zone helps filter runoff.”

Kirchner said Coffey came up with the idea to expand the Water Plant Park, then Melissa McAllister with CREEC and the University of Kentucky pointed the groups in the right direction for possible grant funding.

Kirchner said the grant does not require matching funds, but applicants like Danville receive extra points toward getting the grant if they do provide matching funds. The signage around other trails would amount to a second phase of the project and wouldn’t be funded by the current grant request, she said.

Coffey said it’s a low-risk request because the matching funds are already planned to be spent. 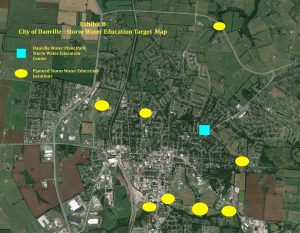 Graphic submitted
A map submitted as part of Danville’s grant application shows the proposed location for an education park at the water treatment plant (square) and proposed locations for additional educational signage around the area.

“We had already budgeted some money to invest in the park. Because of that investment, it’s an automatic match, so really you’re adding to the available resources to build the park,” he said. “It’s a great fit. It’s little obligation on the front-side for the city. If we get rejected, we get rejected. If not, we’re in good shape.”

“This is definitely going to make a park, not just a playground,” he said. “And that’s what’s really needed.”