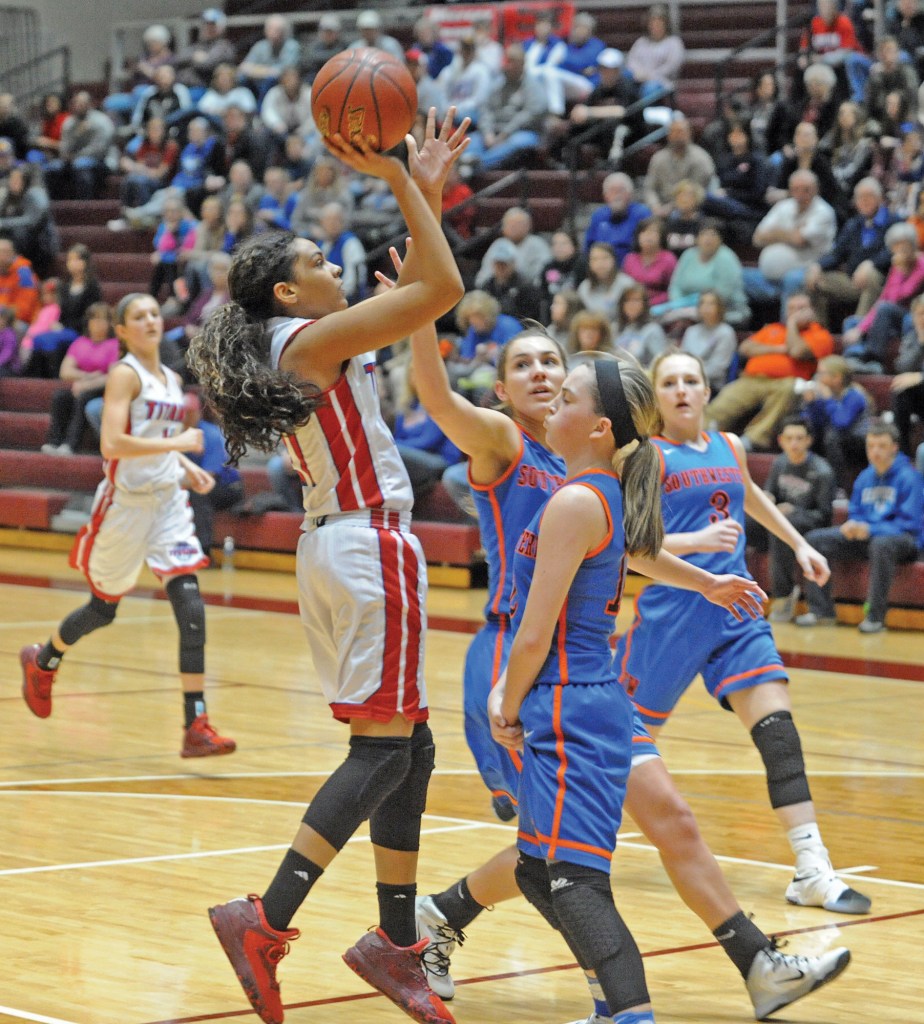 But a big night from Seygan Robins and a gritty all-around performance gave the Titans a 64-46 victory over the 48th District champions.

Robins scored a game-high 23 points, including 12 in the first quarter, and surpassed the 2,000 point mark for her career.

“Our kids did what they had to do, that’s the good thing,” Mercer coach Chris Souder said. “We were off, we missed a lot of easy shots. But Seygan was Seygan. She just goes to a different level, just things you can’t teach. I’m just really proud of my team for grinding it out. I got after them pretty good at halftime about the defensive end. If we’re missing shots, that’s part of it, you can at least guard somebody.”

Mercer led 21-10 after one quarter and scored just nine points in the second quarter to take a 30-17 lead into the break. Robins had 15 first-half points while Faith and Lexy Lake each added five points.

It was still relatively slow going for the Titans in the third quarter, but 3-pointers from Lexy Lake, Emmy Souder and Lyric Houston kept the Titans comfortably ahead of Southwestern.

The Warriors’ offense started to click at the end of the third quarter and the start of the fourth, warranting a defensive switch from coach Souder.

“In the third quarter, I told them it was my fault, I stayed in the zone too long and they got hot,” he said. “That was my fault. But we alway seem to hit timely shots, the girls are unselfish. It’s a good win for us.”

After trailing 46-27 at the start of the fourth quarter, Southwestern cut the lead to single digits once in the final eight minutes before Mercer’s shots started falling. Lexy Lake hit a pair of 3s, Faith Lake had four points and Robins added four more as Mercer put its foot down to reach its fourth-straight 12th Region championship game.

“Everybody expects us to win by 30 or 40,” coach Souder said. “Any time you win a region semifinal game by 18, we’ll take it. I know people have high expectations for us, sometimes I get caught up in it, too, but I guarantee you if you ask anybody else in the state, they’d take an 18-point win in the region semifinals.”

The Titans will face Lincoln County for the second-straight year in the region championship. Lincoln took care of business against Wayne County in the other semifinal game Friday, winning 81-59.

“You get to this point, they’re all tough,” coach Souder said. “Once again, we just want to play our game and what happens happens. I’m just proud of our kids, this bunch has been in the region finals now four years in a row. That’s hard to do, I don’t care who you are. I’m super proud of them. It’ll be a tough game.”

Mercer beat Southwestern by one point last season on a last-second shot by Robins. No last-second heroics were needed this year, but Robins had another special night, coach Souder said.

“Seygan, I tell people all the time, she could probably already have 3,000 points,” he said. “But she sacrifices for the team. She gets everybody involved. That’s one of the big reasons we have the success that we have. Seygan is a teamer all the way through. There’s times where I want her to take over more. But she knew tonight, she went to a different level, especially early in the ball game. That’s what great players do, and Seygan is a great player.”