Dorothy Ann Killion, 88, of Stanford, KY, passed away Wednesday, March 1, 2017 at Stanford Health & Rehab Center. Born July 8, 1928 in Lancaster, KY, she was the daughter of the late Jake and Ruby Hopper Sheron, and the widow of Watt (Bud) Killion. 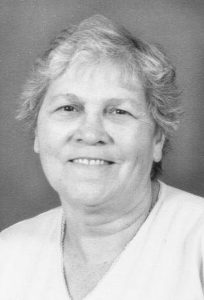 She moved to Nicholasville in 1956, and to Nashville in 1966 where she worked at both Nashville Memorial and Madison Hospitals. Upon retirement she moved back to Stanford, KY in 1993. She was a member of the Seventh Day Adventist Faith.

In addition to her parents and husband, she was preceded in death by a son, Alex Killion; two brothers, Jim Sheron and Robert Sheron; and one sister, Margie Gant.

Visitation will be Monday, March 6, 2017 from 5-8 p.m. at Spurlin Funeral Home Chapel, Stanford. Funeral service will be 11 a.m. Tuesday, March 7, 2017 at the funeral home with Pastor David Clark officiating. Burial will follow at Buffalo Springs Cemetery in Stanford, KY.