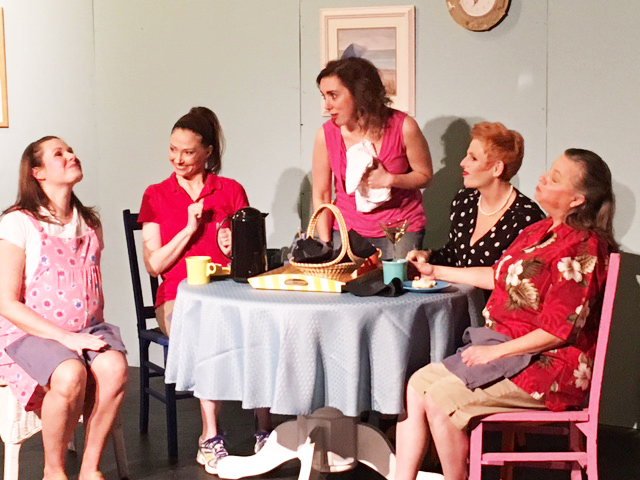 (Photo by Bobbie Curd) Cast members of “The Dixie Swim Club” rehearse a hilarious scene around the table on the beach condo set. They are, from left, Hillary Zimmerman, Lori Shepherd, Julie Taylor, Mary Carol Porter and Jesslyn Newhall.

Martha Robertson says when she first read “The Dixie Swim Club,” it cracked her up.

“I laughed right outloud many times. I saw myself in more than one of these beautiful southern women,” the director says. “I think audience members will, too.”

“The Dixie Swim Club” opens at West T. Hill Community Theatre Friday, and is chock full of hilarious dialogue that folks from around these parts should be pretty familiar with.

Robertson explains the story is about five women — who are closer than sisters.

“They began as a swim team in college, but maintain their closeness all life long. Each year in August, they meet on the Outer Banks (barrier islands off the coast of North Carolina) for a long weekend, away from the world, husbands, children and jobs to reconnect and remember who they are to each other, and to themselves.”

Robertson says this was actually a difficult show to cast. 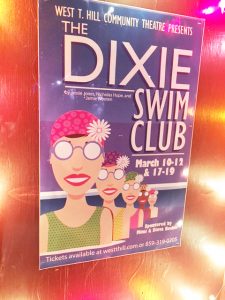 “These women have had only about eight weeks to become closer than sisters themselves. To bond, to depend on each other, to become southern in a couple of cases …”

Robertson says she had to find the right chemistry between them, and then trust them to the bonding process.

“We have two newcomers to West T. Hill’s stage. The other three are WTH veterans,” she says.

The cast is an ensemble cast — “In every way. There is no single star among them, but a cast full of stars shining brightly,” Robertson says.

The director wants audience members to feel as though they are right there, on the beach and in the beach cottage with these ladies. “Like they know them, have been them at some point in their own lives. I want them to walk out of the theater thinking ‘The Outer Banks in August is exactly where I want to be next year,’ no matter where their personal Outer Banks happens to be. And if their sisters or brothers — by blood or bond — happen to join them, they will be better off for it.”

She says the play will appeal to most all audiences, she feels. “Sisters’ night out. Girlfriends’ night out. It’s a great date-night play. It’s funny and poignant at the same time. Anyone who has ever had a thought about their own aging and mortality will love seeing this show,” Robertson says. “And, that’s all of us — isn’t it?”

The full cast and crew