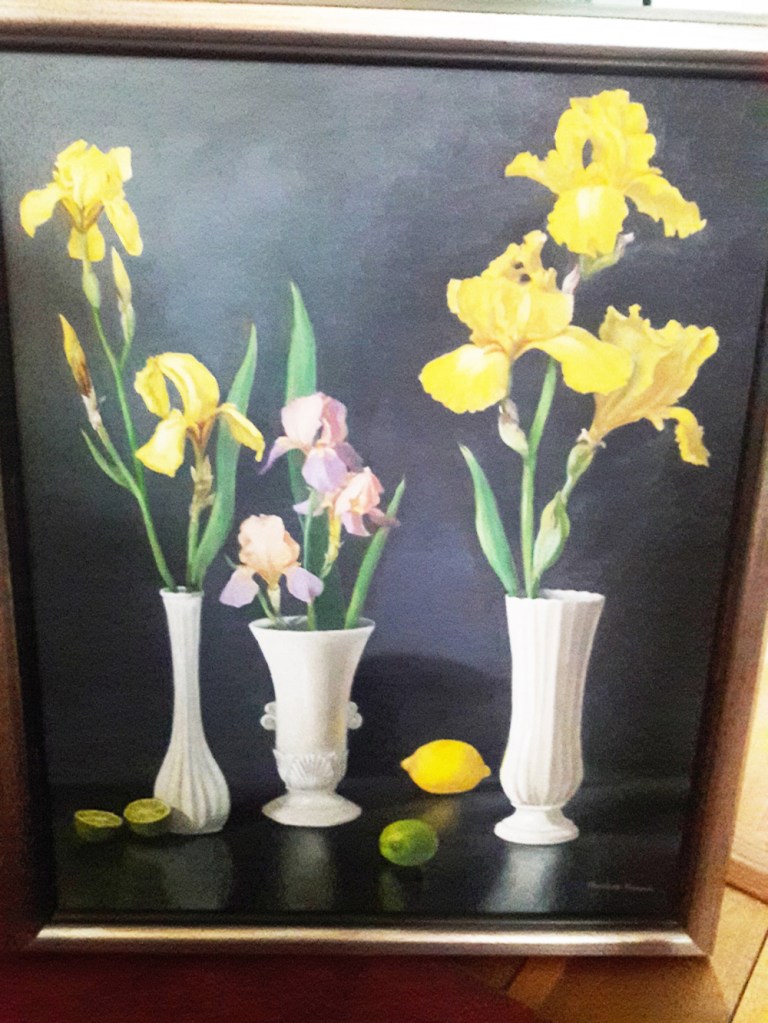 Two very personal exhibits are now up at the Boyle County Public Library and the Danville Country Club.

“Artists were asked to share who in the community had purchased a piece of their work,” says Mimi Becker, director of the Arts Commission of Danville/Boyle County.  “If asked, people might say collecting art is a hobby enjoyed by very few individuals. Many would assume it is a pastime only a few can afford. The Arts Commission is mounting two exhibits this weekend that illustrate just the opposite.”

The exhibits, called Private Collections, is an eclectic mixture of local art on loan to the Arts Commission during March and April.

“The result is a varied display of the range of art created locally,” Becker says. She says while the art  has likely appreciated in value over the years since each piece was originally purchased, each collector has emphatically stated that the price was not a condition of the purchase nor does it figure in its value to the owner today.

“Each owner had a particular story to tell as the pieces were brought in for exhibit,” Becker says. “The Arts Commission is thankful to both the artists and the owners for their willingness to share these pieces.”

Becker gathered input from some local art owners who agreed to participate in the show by loaning their pieces. Here are their stories:

• Richard Trollinger, recently retired chairman of the Board of the Economic Development Partnership, sat in many meetings at the McKinney Conference Center through the years. Becker says, “If you must sit in a meeting anywhere it’s really nice if you can enjoy original artwork at the same time.” The walls of the Conference Center at Constitution Square are decorated with revolving art exhibits designed by the Arts Commission and featuring the work of local artists.

During one stretch of meetings, a particular piece caught Trollinger’s eye. He contemplated it over a few weeks and finally decided he had to have it. And so, “Yellow Iris, Lemons and Limes” by Marlene Hanna now hangs over the mantel in the Trollinger home.

• Local artist Gaynella McGuire and her late husband Richard, were at a gallery showing several years ago,  and spotted an elegant collage entitled “Structural Integrity” by John Dixon. There was a price tag on it, but in conversation with Dixon, he wavered at the prospect of actually parting with the piece. “Perhaps Dixon relented knowing the interest was coming from an artist, as well as a collector, and the sale was completed,” Becker says.

• Jody Lassiter, president of the Economic Development Partnership, purchased a watercolor of the Watts Bell House by Peggy Sherry of Somerset. You can see it as soon as you enter his office.

The exchange happened after the Plein Air Artists of Central Kentucky spent a day painting scenes at Constitution Square Historic Site in September. When the finished works were exhibited at the McKinney Conference Center in November and December, three pieces were purchased by individuals who work every day in the Square. 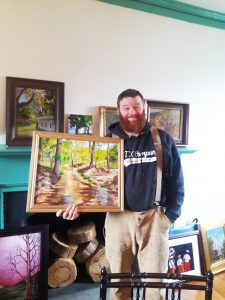 • Scott and Michelle Gowers live in Forkland. Michelle Gowers, herself, is a muralist.  One of their favorite artists is Pat Williams, also of Forkland. The Gowers own two of Williams’ pieces, one of which is called “Creek on Black Lick Road.”

“Scott Gowers loaned us the piece and said they chose it because Pat caught the sun on the creek either in the morning or the evening, he wasn’t sure which, but either way, it was lovely,” Becker says. “He commented he knows the creek is a favorite place of Pat’s and he could just imagine her sitting on the bank painting the scene.”

Becker says individuals build their art collections in many ways for very different reasons. “The Gowers have chosen works specifically because they tell the story of their Forkland community by an artist who lives and often paints scenes in Forkland.”

•  Tom and Lynn Tye have built an entire collection around the Great American Brass Band Festival since they have volunteered at this event for many years.

Becker says, “They, too, have chosen several pieces by a single artist, Tillie Sowders, whose work captures some of the most beloved images of this weekend in June. When asked which one they wanted to include in the exhibit, Tom said it was like picking between your children, each piece is so special.”

• Paula Fowler, executive director of the Danville-Boyle County Chamber of Commerce, enjoys depictions of local scenes such as the courthouse and Fisher’s Row.

“The youngest collector in the exhibits has shared a whimsical portrait of a pig. Another couple is building a personal collection as well as purchasing local art as gifts for their adult children who no longer live in Danville,” Becker says. “They have no particular theme, artist or style in mind as they shop. They purchase what strikes them as interesting at the moment.”