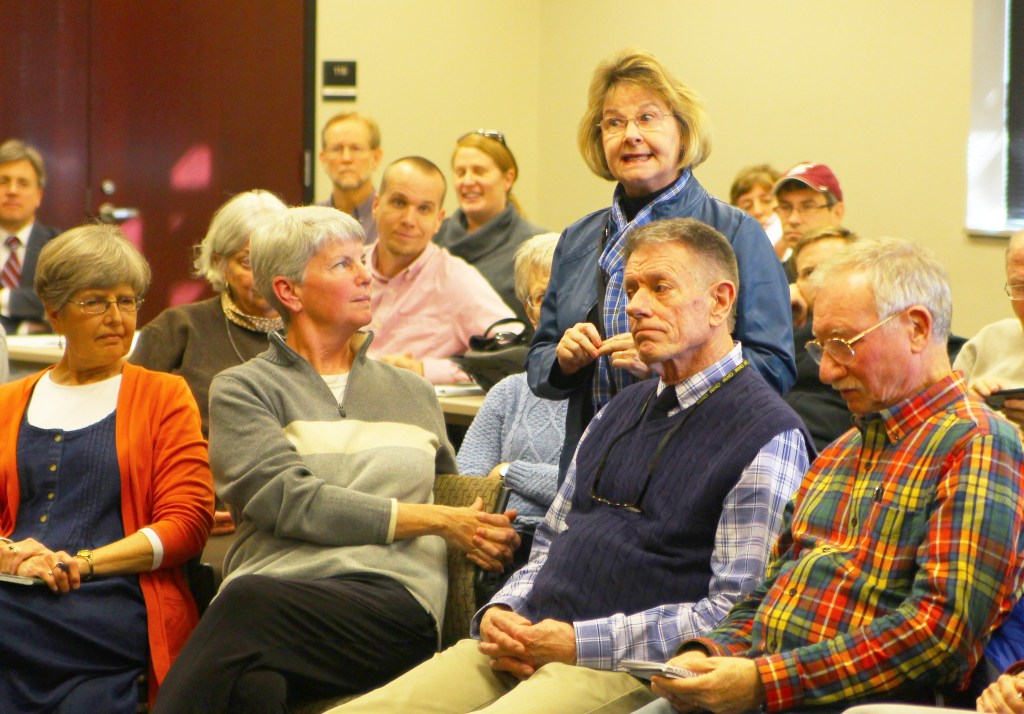 Local progressive groups got a chance Thursday afternoon to share their thoughts and concerns with the district director for U.S. Rep. Brett Guthrie’s office. 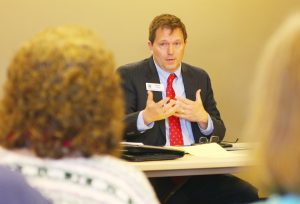 The meeting was held at Inter-County Energy’s community room along Hustonville Road in Danville. About 50 people with five groups — Kentuckians for the Commonwealth, the Women’s Network, the American Civil Liberties Union, the local Citizens Concerned for Human Relations organization and the Boyle County Democratic Party — spoke with Mark Lord, district director for Rep. Guthrie, a Republican.

“My pledge to you is to listen and that’s primarily how this will be. So my responses to you, first of all, will be somewhat vanilla,” Lord told those gathered. “I need to let the congressman speak to some of these things truly in his own voice.”

Those gathered spoke to Lord for 90 minutes on five topics: the Affordable Care Act; women’s healthcare; charter schools and education; immigration and refugees; and “Russia/Tax Returns.”

For each person who spoke, Lord kept track of their name and promised to use a contact sheet to let Rep. Guthrie respond to those who wanted a response. All of the comments would be shared with Guthrie so he can be aware of what constituents are concerned about, Lord said.

On the topic of the Affordable Care Act, many asked that the healthcare reform bill from 2010 not be repealed, but improved or replaced. There was strong support among those gathered for working toward a single-payer health insurance system rather than the current system that relies on private insurance companies.

Attendees asked that Guthrie protect specific things put in place by the ACA — coverage for existing conditions and a ban on lifetime limits for coverage being two examples.

Attendees also asked that Guthrie make sure whatever health legislation comes out of Congress maintain coverage in the areas of maternity services, mental health, substance abuse, birth control, dental and vision for children, people with disabilities and people who are homeless.

Rick Axtell, a Centre College professor, said he has “been working on issues related to homelessness for over 25 years.”

“One of the discouraging things when people say Obamacare is a failure — by the way, I’m not somebody who defends Obamacare; I think it has a lot of problems, but it is better than what we had before — what I want to say is, ‘a failure for who?’” Axtell said. “One of the things that has impressed me about what this program did is that it provided insurance for a whole lot of people who have nothing. In our state, it’s 450,000 people.”

Axtell said he took his class recently to a clinic for homeless people, where they learned that prior to the ACA, around 90 percent of homeless people coming to the clinic had no insurance. Now, 90 percent do have insurance, he said.

Attendees told Lord they are opposed to the defunding of Planned Parenthood because the organization provides many different and important health care services for women.

Lord told those gathered he would take their comments back to Guthrie.

Julie Pease told Lord she appreciates that Rep. Guthrie does host town halls regularly and hopes he will “kick it up a little bit” because many people are “raising their voices” about government.

“We are not crazy people; we are not rabid. We are thoughtful, concerned citizens,” Pease said.

Linda Porter said she believes Guthrie should “look very closely” at any bill proposing a new school voucher system that would allow parents to take their children out of public school and send them to private, home or religious schools.

“The voucher programs and bills that are out there right now are saying to people who have children with disabilities that they give up the rights that they have to use any federal regulations supporting their children once they take that money and place their children in private school,” she said. “And that’s huge.”

Those gathered told Lord they want to see Rep. Guthrie call for Trump to release his tax returns and prove he is not inappropriately tied up with Russians financially. And they want Guthrie to support an independent investigation into Russia’s involvement in the 2016 presidential election.

As time ran out for the meeting, Lord told those gathered it had “been a joy to be with you today.”

“You’ve been very gracious; I appreciate that. I do desire to engage in a more robust conversation with you and the congressman as we come back to the area,” he said.

“This is what democracy looks like,” Danville resident Jim Porter said. Lord agreed.

Lauren Gaydos, communications director for Rep. Guthrie’s office, contacted The Advocate-Messenger after Thursday’s meeting to state that the local meeting with Lord was intended to be “off the record” and Guthrie’s office was unaware that press had been invited.