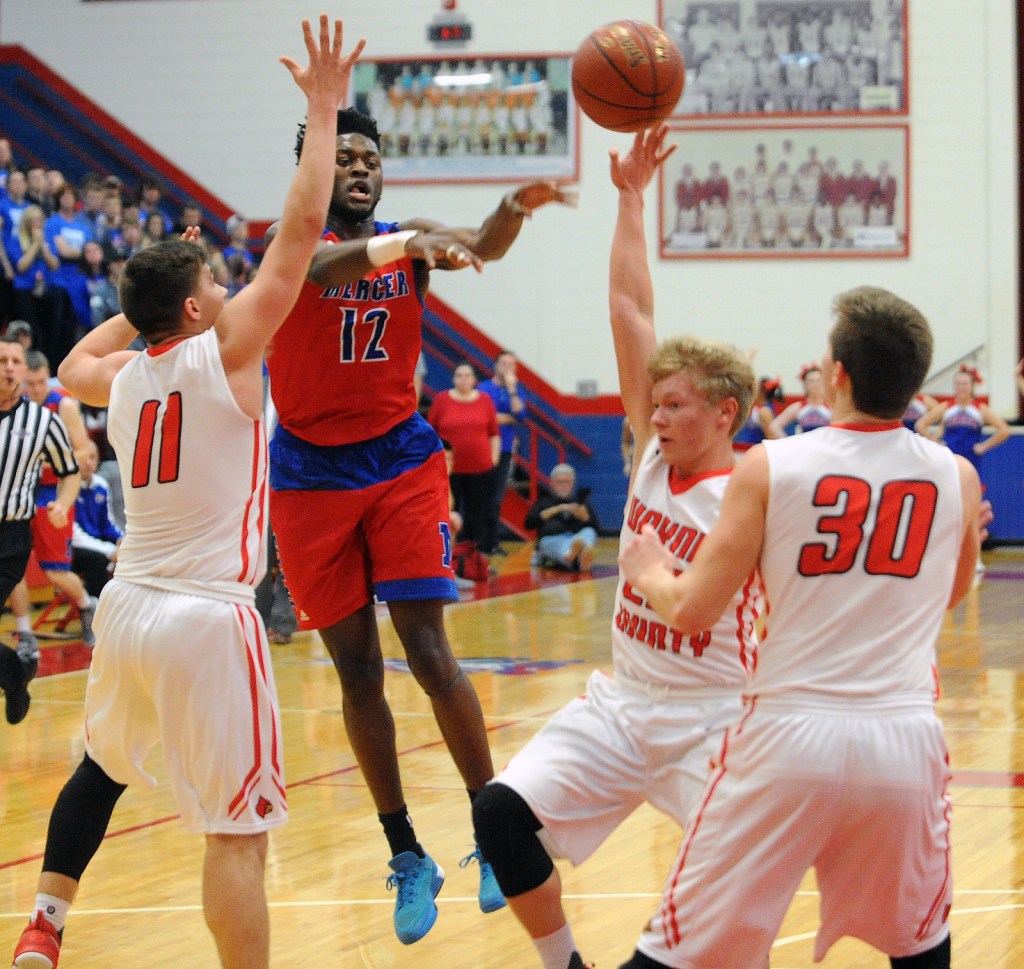 STANFORD — Everyone knows what Mercer County is capable of on offense, but it is defense that is driving the Titans toward Rupp Arena once more.

Mercer used its defense to wear down Wayne County on Monday night in the semifinals of the boys 12th Region Tournament, winning 77-64 to move within one win of a second straight regional championship.

The Titans turned the tables in the third quarter behind a facet of their game that is often overlooked as they push the pace and pile up points. They outscored Wayne 21-12 in the period, giving up only two points in the final 4:17.

A string of hustle plays late in the third quarter exemplified that effort as Mercer (25-7) took control of the game with a 12-2 run and pushed its way into tonight’s regional final.

“Our kids are remarkable young men. They don’t all make the flashy plays, the dunks, but they make those hustle plays based on heart, and that’s why we’re where we’re at,” Mercer coach Kurt Young said.

The Titans will play Pulaski County, which defeated Boyle County 66-53 in Monday’s second semifinal, in the 7 p.m. final for a trip to the Boys Sweet 16 next week in Lexington.

Mercer is the defending regional champion, but the Titans, who lost five of their top six scorers and their coach after last season, won’t consider it a repeat if they win tonight.

“We’re not repeating; it’s a brand new team,” Young said. “This is a completely different team, and it’s just going to be (a matter of) playing our way. We’ve got to make the game an up-tempo game, be the tougher team, beat them to 50-50 balls.”

That worked for Mercer against Wayne (17-17), which scored more points on the Titans than any other team they have faced this in Mercer’s 95-90 victory on Jan. 13.

Mercer’s opponents average just 64.2 points per game, however, and the Titans have held their last five opponents below that mark.

In this game, Wayne shot 77 percent from the field in the first quarter, when it went 10 for 13 overall and 3 for 3 from 3-point range. But the Cardinals, who were shooting 48 percent on the season, shot 36 percent (15 for 42) overall and were just 3 for 18 from behind the line over the final three periods.

Wayne turned the ball over just three times in the first half, but Mercer forced nine turnovers – a high number for a typically sound team – in the second.

“And more than turning them over, we just made it hard. When we got that lead, they had to run time off the clock because of our pressure,” Young said.

Young said the Titans’ defensive game plan went pretty much like he wants it to in every game.

“That’s been our goal all year long. We tell our guys, ‘If teams make shots but we make them work for those shots, eventually they’re going to wear down,’” he said. “Our guys did a great job of sticking with it. … I thought we did a good job of settling down, especially in the second half, and being solid with our pressure.”

Then there was that stretch late in the third quarter when Mercer very nearly brought the house down.

The Titans trailed by as many as eight points in the second quarter, and Wayne narrowly missed a 3 that would have made it an eight-point game again before Grayson Blevins buried a 3 on the other end to pull Mercer within 45-43 with 3:23 left in the period.

Just over a minute later, Seth Tatum intercepted a Wayne pass and raced for a layup that tied the game for the first time since the first quarter.

Stetson Simpson put the Cardinals back on top moments later with a layup of his own, but Tatum drew a foul and hit two free throws to tie the game once more, and Dean buried a 3-point shot off a Wayne turnover to put the Titans in front to stay at 50-47.

Before the Cardinals could regroup from Dean’s 3, he dove for a loose ball and called timeout to preserve the possession. The Mercer fans rose and roared their approval as Dean got up, and the players waved their arms to signal for even more noise as they moved toward the bench.

The Titans held the ball for the final shot of the period, and Dean drove the baseline for a finger roll ahead of the horn that gave them a 52-47 lead and again ignited the fans wearing red and blue.

“It was just a momentum-changer. The regional tournament is all about momentum, and that run really gave us the momentum, and we just never looked back after that,” Dean said.

Trevon Faulkner, who scored a school-record 46 points for Mercer in its first meeting with Wayne, led the Titans with 25 points and seven rebounds in the rematch.

He scored 10 points in the fourth quarter, including eight straight for the Titans to propel them to a 63-53 lead after the Cardinals had pulled within four on a three-point play by Aubrey Weaver, who led Wayne with 16 points.

The game was tied at 16-all late in the first quarter before Wayne outscored Mercer 13-5 to take its largest lead at 29-21 early in the second.

“In the first quarter, they were hitting everything,” Dean said. “We all talked at halftime and said that we had to pick it up on defense. We just had to make sure that we got a hand up. They hit a few difficult shots, but they’re going to hit some of those. We also had to take away the driving lanes and not give up the easy buckets.”

“When we don’t turn it over, we get shots,” Young said. “It was a very good floor game by our guys. Wayne County’s such a good team, and we knew it was going to be a war, especially with both teams having time to prepare.”

There is little time to prepare for tonight’s title game, a rematch of a Jan. 31 game that Mercer won 99-89 behind 61 percent shooting from the field, 29 points by Faulkner and 26 by Gillis.

Pulaski hasn’t been in the regional finals since the 1990s and is playing for its first regional title since 1992.

And while Mercer is bidding for a repeat, er, a second consecutive championship, the Titans don’t have all that much experience to draw on, either. However, Dean said they hope to draw on the same kind of effort that has served them well so far in this tournament.

“It’s a great opportunity,” he said. “Trevon’s the only one who actually played in the tournament last year, and he’s obviously a big part. But all of us just chip in, and it’s our effort that’s gotten us here.”

Pulaski’s size too much for Boyle in semifinal loss