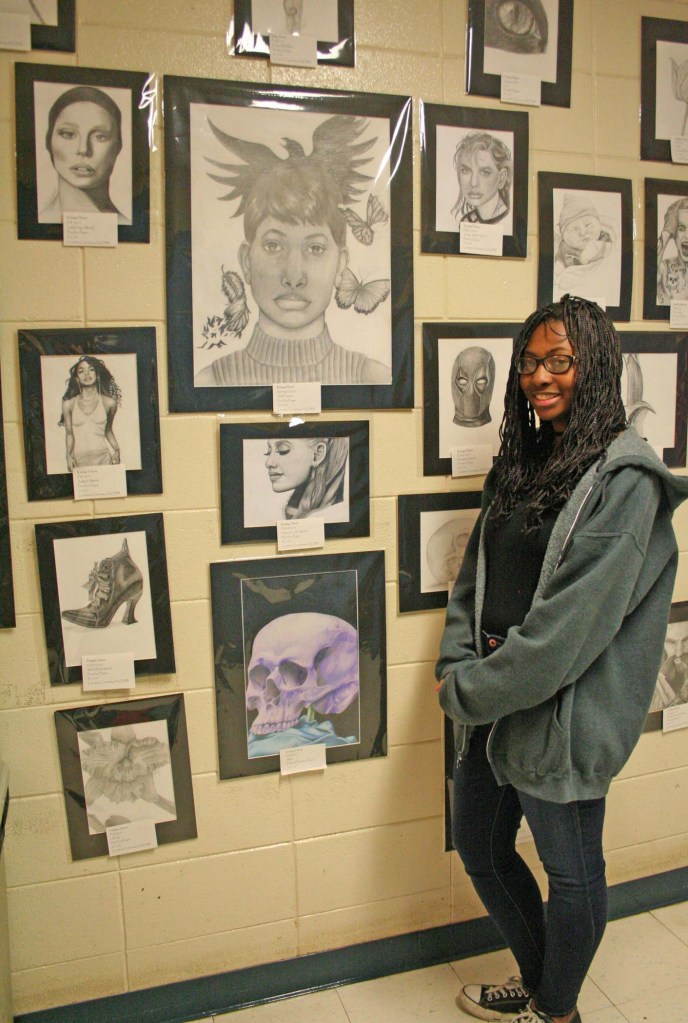 Kendra Peek/kendra.peek@amnews.com Keimya Harris, a senior at Lincoln County High School, with some of her artwork.

“Art is important. Art is life,” she said, adding a common millennial term: a hashtag.

The Stanford teen began drawing from a young age and has stuck with graphite as her favorite medium.

“I love graphite. That’s hands-down my favorite. It’s one of those I’ve been using since I was little — everybody picks up a pencil. You tend to develop with it over time if you keep going with it. That’s what I did,” Harris said.

She remembers renting movies as a kid and trying to trace the characters from the box — specifically Alvin and the Chipmunks.

“I would take cups and try to trace the heads,” she said.

Harris said her late grandmother Betty Ann Brown, whom she called “Annie,” had a big impact on her art, too.

“Annie” worked at DecoArt in Stanford, but was also an artist in her own right, making clay sculptures — she also drew Harris a picture of Betty Boop, the teen recalled.

“It was beautiful,” she said.

For Harris, her love of drawing comes down two things: being able to “express” herself and being able “tell a story, whether it be about my experiences, someone else’s experiences or just from my imagination.”

At the age of 15, Harris was given the opportunity to showcase her skills in her first show in Lexington, one of a handful of artists featured. She was a freshman at the time and was the youngest in the show.

“It was really fun for me to do. I sold one piece,” she said. It was one she had completed in Kimberly Evans’ class at Lincoln County High School.

Evans said she has been “fortunate enough” to be Harris’ teacher for almost four years.

“Not too many teachers are able to do that … Keimya has always been someone who has taken her artwork seriously. She’s a very respectful, very kind person. Also very aware of what going on in the world. Very positive and mature for her age,” Evans said. “She’s one-of-a-kind, most definitely.”

She said Harris was very serious about her education.

After graduation, Harris plans to attend Savannah College of Art and Design and major in animation.

“(It will) allow me to be around more artistic people, be able to express myself in art, and do something I love,” she said. “If my major doesn’t work out, I have so many artistic majors to pick from.”

The teen selected animation because she enjoys making cartoons and stories. Currently, she doesn’t have the technology to do animation.

“I want to create cartoons. As a person of color, I want to be able to influence young girls and boys of color — even if it is a white-male-dominated field, you can get out there and be anything you want.”

Some of her favorite stories feature her and her friends. She makes characters based off of them and things they are going through in life.

It’s hard for the teen to pick a favorite piece, listing some of her recent ones: a ceramic vase, a ceramic mask, a drawing of Ariana Grande, a skeleton drawing …

Harris is currently working on a piece featuring her aunt and a cousin.

Drawing people is “hands-down” her favorite.

Besides graphite, she has worked with clay, charcoal, pastels and paints, and is starting to work in colored pencil. While she likes realism, Harris said she’s starting to get into “hyperrealism.”

“It’s like, ‘Is that artwork or a picture?’ It’s going to take a long time for me to get there,” Harris said.

While she’s looking toward graduation, Harris said she really enjoys her current art class, full of juniors and seniors, including the three other girls that make up her “art squad,” who are some of her closest friends: Christa Hicks, Hannah Pendleton and Shelby Miracle.

“They’re a really great set of kids to do art with,” she said.

Besides her friends, her other big supporters are her parents, Maurice and Bridgette Harris, her big brother Justin and her little sisters Tylia and Mikia, along with her grandma, Frieda Harris.

Keimya Harris said she “really” enjoys her art class, but also enjoys a film and literature class offered at the high school.

“Being a person of color in Lincoln County is sometimes tough,” she said, explaining that it’s not uncommon to be the only person of color in her class. “A whole bunch of things influence me to be who I am and develop my own schema. You learn things. It’s hard when you grow up here — most people don’t think the way I think.”

Last year, Harris got to go on a school trip to France through her French class. It made a lasting impact on the teen.

“It was breathtaking. I wanted tour the Louvre and see the Mona Lisa before I die — that was one of my life goals, she said. “I can knock them off the list, at a young age, actually. I thought I would be a lot older.”