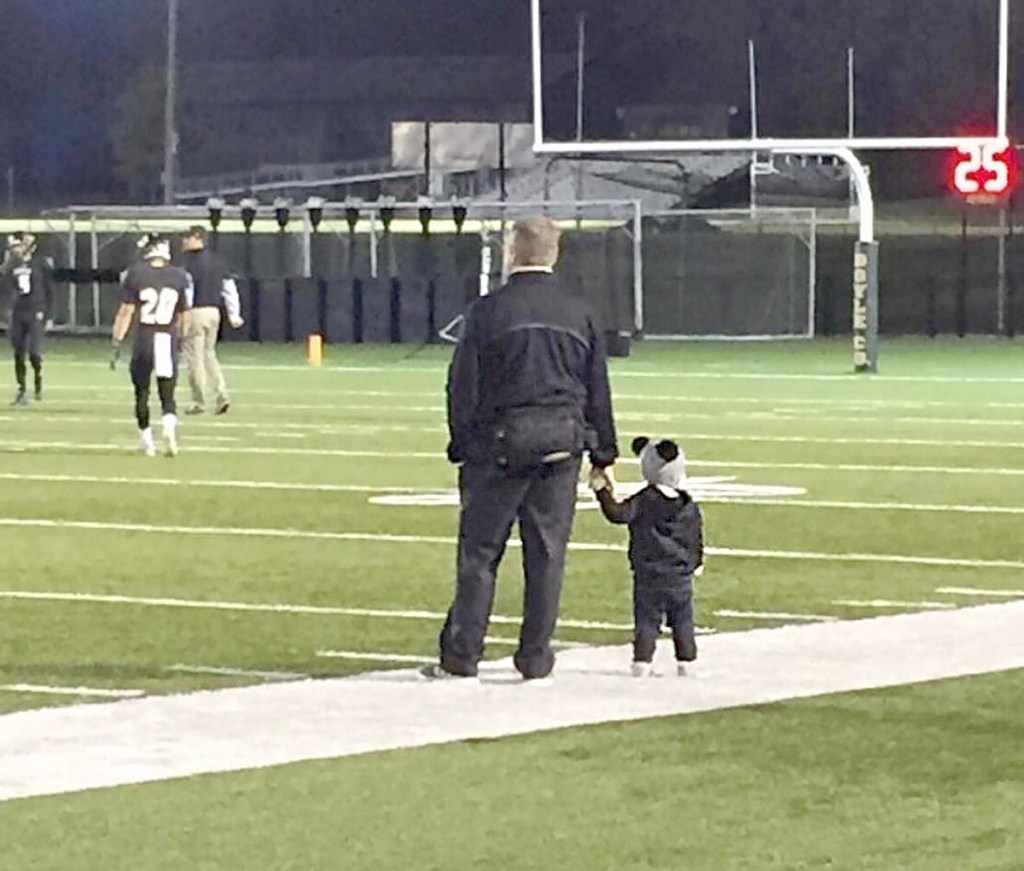 Johnson’s wife Claire often brings their son Brooks to games and practices to spend time with his dad. Johnson spends many late nights at the field, so family time is special on the sideline.

Various laborious activities take place in the hallways of a school while students are tucked away in their classrooms. When the doors open, this work may be taken for granted and often overlooked. However, that is not the case at Boyle County High School.

The hard work performed by our custodians creates a clean and inviting environment. But it is the personal interaction that makes the greatest impression. Custodians Mark Hogue, Barb DeCan and Rick Richardson interact and impact the students, teachers and administrators on a daily basis.

One custodian in particular stands out among students at the high school — “Ms. Barb” as she is so affectionately called. DeCan has been a custodian for 23 years total; she’s been at BCHS three years.

She says she cannot imagine doing anything else. 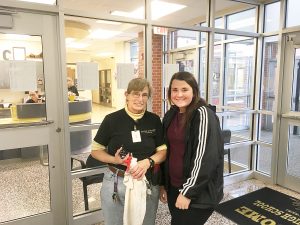 Photo by Paul Webb
Custodian Barb DeCan enjoys getting to know students and supporting them in their activities. Senior Bekah Adams really appreciates how much she cares for everyone.

When Principal Mark Wade was considering the employment of DeCan, he said, “She ensured the hiring committee that our school would be clean. She made the statement multiple times that the way she cleaned would help to promote a healthy environment for students. Those were things she said that really stood out to the hiring committee for the hire.”

Three years later, DeCan works hard to keep up with those promises.

Previously, DeCan had worked at Mercer County High School and that is where Boyle County AP Calculus teacher Loran Crowell first met her.

“I’ve known Barb ever since I was in high school at Mercer. She is the most hardworking person I have ever met in my entire life,” Crowell said.

Crowell, as well as many others throughout our school, recognizes her hard work and determination to do her job right and with a purpose.

“She’s the best employee because she does exactly what she’s asked to do with the most effort that she could possibly give,” Crowell said. “She’s so dedicated and she takes pride in her work, which she should because it’s phenomenal.”

“I’m very thankful for Barb because she cleaned our locker room and made everything smell good. The locker room would be a mess and after she would get done, we would come in and it would be spotless. It’s awesome having her around,” Hardwick said.

But DeCan’s caring heart is what truly captures the attention of the students. During the fall, senior football manager Bekah Adams spent many hours in the school preparing for and cleaning up after practice. This is where Adams developed a personal relationship with DeCan.

“After football practice, we would always see each other in the hallways and she would be concerned making sure I’d get home okay. She would ask me how my day was and really wanted to make sure I was doing okay. We started to have a personal relationship and I love talking to her every single day,” Adams said.

DeCan’s caring personality is what makes her so likeable and easy to talk to. Crowell further shares, “She’s so nice and she makes me feel good everytime I see her in the hallway, she’s like family.”

Principal Wade agrees. “Barb definitely has a personality that’s open and inviting to others. She is a lot of fun to be around.”

It is more than the conversations that DeCan gets involved in, as she loves supporting the activities of the students as well. Adams recalls seeing her in the gym cheering on the Rebels.

“I see her in the bleachers hoopin’ and hollerin’ during basketball games,” Adams said and smiled.

“She is constantly talking and interacting with students, finding out what activities they are involved in. She is at school many times after hours and so she sees what students are engaged in. She makes it a fun place to be.”

As for DeCan herself, she sees being friendly and caring as part of her purpose.

When asked what she likes most about working at the high school she responds with a simple yet emphatic answer, “My kids.”

It is obvious she goes above and beyond the job description.

“I love my kids and I love encouraging them and seeing our school being number one. Whether we win or not, we’re No. 1.”

Looking back, DeCan never thought that she would become a custodian. However, when she applied 23 years ago for a custodial position, she knew she could fulfill a different type of role.

“I realized there are kids out there that need a mother figure that we don’t know about, and that’s why I treat all the kids the same and love them all. And if someone seems like they need a hug, I’ll give them a hug.”

And that is precisely what every high schooler needs, someone who cares.

Behind the scenes of Rebel sports

Athletic training is an essential factor in sports, and having a good athletic trainer rehabilitate an athlete back onto the field after an injury makes a huge difference in the team’s performance. Boyle County High School athletics would not be at the competitive level they are today without the hard work of athletic trainer Jeremy Johnson.

Years after attending Boyle himself and serving as an athletic trainer student aide for both the football and baseball programs, Johnson returned to Boyle where he has been the head AT for the past seven years.

Before passing his certification exam and receiving his license to practice, Johnson attended Eastern Kentucky University where he earned his bachelors in Athletic Training. After graduation, he became the head AT replacing his mentor, Joan Mann, while also continuing to encourage students to take part in the athletic training student aide program that she started. 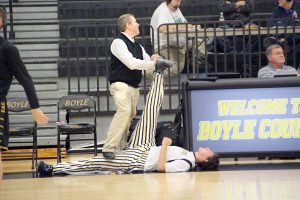 Athletic trainer Jeremy Johnson stretches an athlete on the sideline before a basketball game. Johnson works with athletes before competitions and practices by taping wrists and ankles and afterward by providing ice and treatment. He works hard to ensure that all athletes are provided for properly.

Today, Johnson’s job is far from a 7:30-3:30 position. His day begins early afternoon when he teaches an athletic training class for an hour. Then after school, the pace becomes more hectic. Looking into the training room anywhere from 3:10 p.m. to 5 p.m., he can be found taping wrists, ankles and providing treatment to those in need.

After care has been given to the individuals, he remains at the school until all the teams are finished practicing. As his evening comes to a close, he provides ice and treatment once again to prepare them for the next day of activity.

On most game nights, he is usually the last one to leave after ensuring every athlete has what he or she needs to take care of their injuries or exhausted muscles and joints.

Because Johnson assists with every sport at the high school, you will always see him on the sideline cheering on the Rebels and ready to help with everything, from a lost contact to a torn ACL.

His passion for helping athletes was ignited at a young age.

“I got cut from the freshman basketball team. It was one of the best things that ever happened to me. I still wanted to be involved with athletics, so I became an athletic training student aide under our AT at the time.  What I viewed as a setback at the time, shaped my career path and eventually lead me back to Boyle where I met my wife.”

Johnson has had many great mentors who have shaped him into the hard working AT he is today.

“The first is my father.  He taught me all about hard work and perseverance. He’s still the hardest working person I know.  The other is Joan Mann.  She was the AT here at BCHS for over 20 years and is now in the Kentucky Athletic Trainers’ Society Hall of Fame.”

Throughout the school, Johnson is not only known as an athletic trainer, but also a supporter and friend. “My favorite memories are of athletes that I’ve helped return to play after a season ending injury. I hate seeing them injured, so I do my best to prevent these injuries. Injuries are just part of athletics and some cannot be prevented.  On these occasions it is very rewarding to see a junior student rehabilitate their injury and return to play for their senior season.”

No doubt, Johnson is a Rebel at heart.

“Boyle County is such a special place. We have great kids, parents, teachers, and administrators. Our staff cares about kids. Parents and administrators support the Athletic Training and Sports Medicine program by making sure that we have all the tools necessary to help our athletes compete safely.” 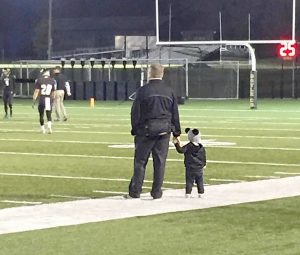 Johnson’s wife Claire often brings their son Brooks to games and practices to spend time with his dad. Johnson spends many late nights at the field, so family time is special on the sideline.

Boyle teams have celebrated many successful moments throughout the years, as a result of well-trained and prepared athletes. Johnson plays a very important role in supporting the wellness of all student/athletes, which makes him a key ingredient in the success of all Boyle County athletics.

Going green: One-time-use plastics can sneak into your lifestyle