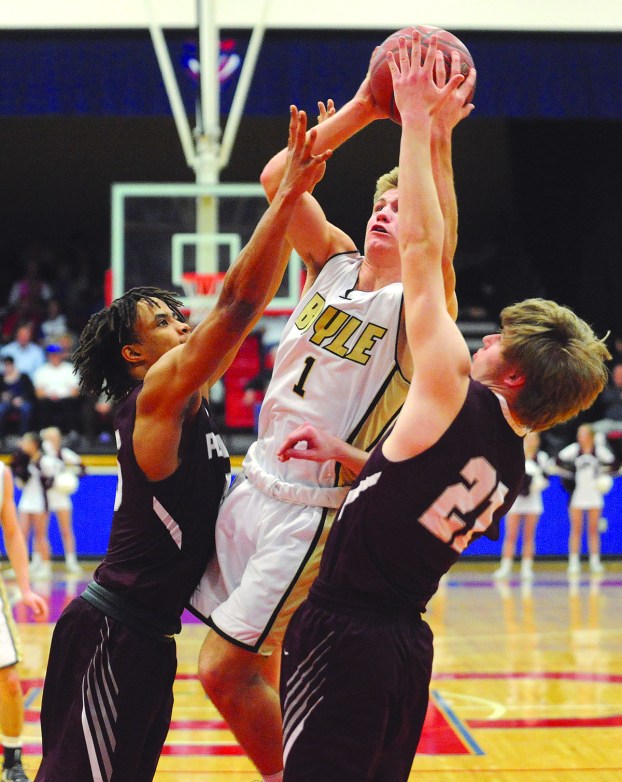 Pulaski’s size too much for Boyle in semifinal loss

STANFORD — Boyle County knew it would have to play its “A” game Monday against Pulaski County in the 12th Region tournament semifinals.

The Maroons, winners of the 47th District, took care of the Rebels on the glass and won comfortably, 66-53. Pulaski finished with eight offensive rebounds and 32 total boards to Boyle’s 23.

“We had to do everything right and things had to go our way,” Boyle coach Steve Adams said. “They’re just so big and athletic. They shoot it well enough that it’s tough. We worked on digging down on the big man but he was just able to bury us underneath the basket, and it was just too far to dig. Things had to go right for us. We knew that coming in. But the kids battled.”

Boyle definitely battled: Starters Grant Hotchkiss and Reese Smith each had injuries in the first half.

“Grant hurt his back early there in the first quarter when he got that steal,” Adams said. “Reese did something to his abdomen there early. He had to get treatment at halftime.”

Hotchkiss’ back bothered him the rest of the game, but he was one of four Rebels on the scoresheet, finishing with seven points. Jason Alexander and Bryce Slone each had 18 points to lead Boyle, and Smith scored 10 points. Slone led Boyle with seven rebounds.

Adams said he liked the way his team prepared for Monday’s match, saying that his team was focused even after a massive upset win over Southwestern on Thursday.

“Kids did a great job. We felt good coming in,” he said. “We were going to try to take away some of their strengths, and we knew that we had to do that very well and we had to keep them off of the offensive boards. And then we had to finish and get them in foul trouble. And we weren’t able to do any of that. We were trying, we just weren’t able to do that.”

Missing from Boyle’s scoresheet is any post player: Will Bramel played just 13 minutes due to foul trouble and Dylan Frederick didn’t attempt a shot.

Part of that was Pulaski’s Trevon Sylvester and Steven Fitzgerald — the pair combined for 22 rebounds and a handful of blocks and altered shots.

“We missed a lot of easy layups. I know we missed at least four in the first half,” Adams said. “Then, I think we got to the point where maybe we were settling, forcing shots when we maybe should’ve went on and attacked. We were trying, kids were battling. Probably at this point, we just ran into a team that was a little bit bigger, stronger, more athletic than us.”

Adams said the loss was his team’s fifth to a team that has been ranked in the top 25 this season. On the year, he said Boyle finished 4-5 against teams that were at one point in the top 25.

“We improved tremendously as the season went along, starting two freshmen and three juniors, two sophomores coming off of the bench,” Adams said. “We probably, maybe exceeded expectations a little bit. But you start playing well, you get competitive, you get greedy. We found ourselves in the semifinals of the region, you get through that one, anything can happen.

“Kids are very disappointed, but like I told them after the game, they should hold their heads high. They battled. We gave it everything we got. Sometimes, the other team is just better. They were better than us tonight. We have nothing to be ashamed of, the kids played well, they prepared for the game well. I couldn’t be more proud.”