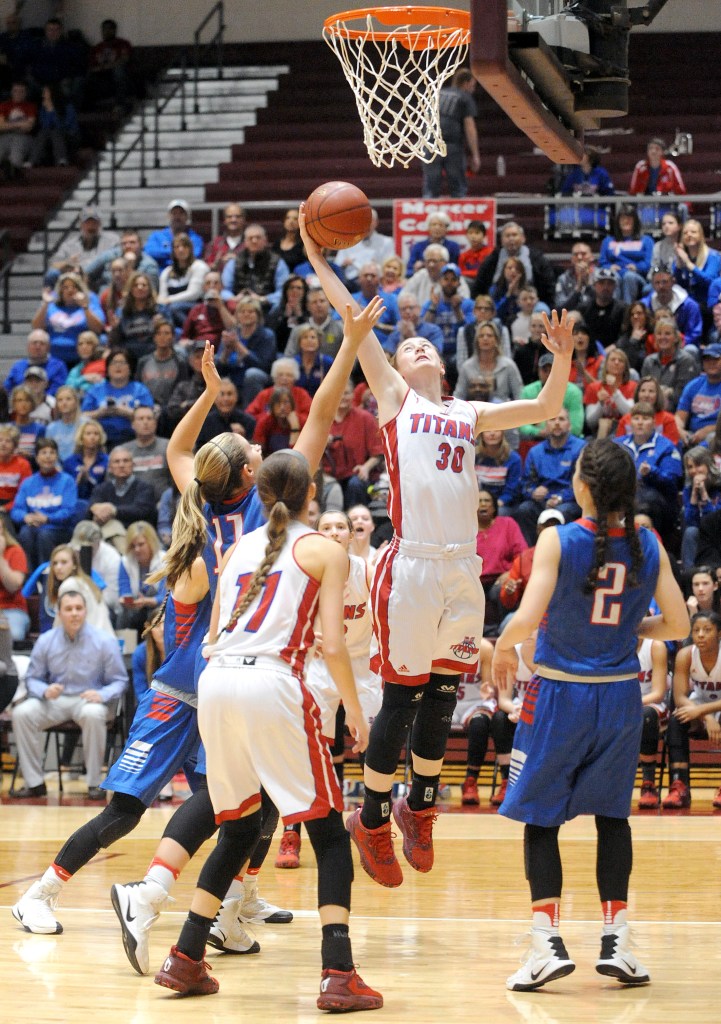 And that alone made this journey harder than the previous two seasons, Mercer coach Chris Souder said.

In the end, though, the Titans fulfilled their promise and met those expectations, running past Lincoln County 83-67 on Saturday at Pulaski County. They’ll face Boyd County (26-8) at 6:30 p.m. Wednesday at Northern Kentucky University in the first round of the KHSAA Sweet 16.

Souder had heard the talk all season, and it only amplified after Mercer once again laid waste to the 46th District tournament and came into the region tournament with a head full of steam. When the Titans won by 18 points over Southwestern in the region semifinal, someone questioned Souder as to why the margin wasn’t larger.

“We tell (the players) all the time, ‘Don’t drink the Kool-Aid,’” Souder said. “But it’s hard, they’re teenagers.”

While winning their third straight region title, the Titans reset the history books as the first team in 38 years to go back-to-back-to-back. Souder knew what was on the line, and he wasn’t holding anything back.

“Mercer’s a great team, they’ve won it (three) years for a reason,” Lincoln coach Cassandra McWhorter said. “Every team would like to be where we’re sitting, too. You don’t want to be a loser, but we made it to the region championship, and that means something because there are a lot of programs whose seasons were over a long time ago.

“But as far as hurting worse because it’s the same team, I think any loss hurts, especially when it’s a region championship game.”

Souder said, “We knew it coming in. When we saw the draw, unless something happened to us, it was going to be us and Lincoln, just like last year. They’ve got a young team, they’re gaining experience in these games. I thought they played better this year than they did last year because they wouldn’t go away, they had a little tenacity to them.”

Try as they might early on, the Titans couldn’t shake the Patriots; they’d go up by six points and look primed to break open the game when Lincoln would charge back. With two minutes to play in the first quarter, Kaitlynn Wilks’ second 3-pointer of the quarter put Lincoln within one at 20-19.

However, Mercer went on one of its patented runs, closing the frame on an 11-0 run for the 31-19 lead after a quarter.

It was a trend which lasted most of the game. While Lincoln couldn’t get closer than seven points the rest of the way, the Pats didn’t allow Mercer to make a mockery of another final score — it had won its previous four playoff games by an average of 33 points.

Their final push came in the fourth quarter, when the Pats made 3-of-4 free throws to close to 66-58. Yet again, though, the Titans had an answer and methodically pushed the lead to 20 with 2 minutes, 40 seconds remaining in the game.

“We’ve been in big games all year long against good teams, and the great thing about these kids is they never get rattled, they never showed being rattled,” Souder said. “Give Lincoln credit, they never went away. They were ready. But our girls are just, they’ve been in this situation. They have great composure.”

McWhorter said while some in the stands might have been surprised to see her squad push Mercer, there was a select — and vital — group who wasn’t.

“Our girls believed,” McWhorter said. “We talked (Friday) before the game against Wayne County about trust, and in the middle of trust is ‘us.’ You have to count on one another, you have to rely on each other. You’ve got to have each other’s back. I thought that showed throughout the tournament.

“I don’t think there were very many people in this gym who honestly, 100 percent thought we could do it. Those 11 players in that locker room and the coaching staff believed.”

Wilks ended a fantastic postseason with another strong outing, leading Lincoln with 25 points. Haley Southerland came off the bench to score 15 points, and Emma King added 13.

“Kaitlynn had a great tournament, and tonight she was ready to go,” McWhorter said. “I’ll take her any night against any post in the region. I thought she really dominated this game.”

Saturday evening belonged to the Titans, though, and none were more important than their star guard, Seygan Robins. She scored a game-high 31 points, making four 3-pointers and going 9-of-10 from the free throw line.

Robins came into the game averaging 15.1 points per game, but Souder noted after Robins went over 2,000 points in her career in Friday’s win that she could just as easily had eclipsed 3,000 in the same time span, if not for her team-first attitude and willingness to share the spotlight.

But that was the semifinal. This was the championship, with a trip to state on the line, and Robins was on.

“We can tell when Seygan is feeling it, and you just turn her loose,” Souder said. “She may take a bad shot or two, but we’re good with it. … She came out and she knew it was the championship game, and that’s what great players do. Those are things you can’t teach. She’s just a special player.”

So now it’s on to the state tournament, where Mercer will try to improve upon last year’s semifinalist finish. Its next opponent, Boyd won the 16th Region title with a 66-63 win over East Carter. The Lions enter the tournament on a 10-game winning streak.

Even though Souder’s plan was to give his players Sunday away from the court before coming back today, the players decided to hold a player’s practice. It shows the mindset of the Titans coming into this week’s state tournament.

But for Souder, anything that happens from here is just icing on the cake.

“I told them tonight, after this, anything in the state tournament is a bonus,” Souder said. “We’re one of the favorites, but I don’t care about that. It’s a bonus. So many other teams would kill to get there. So we’re going to go there and play hard. If we win a state championship, great, but if we don’t, we’re going to go down fighting.”

Titans heading back to state tournament