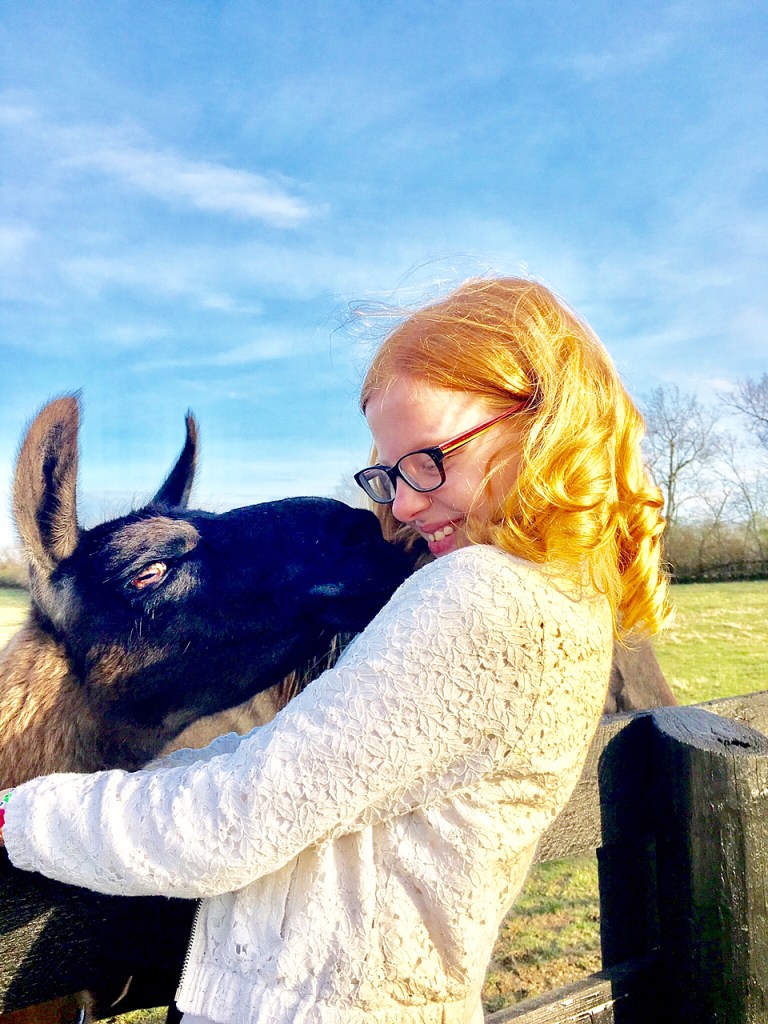 (Photo courtesy of Fizzy Ramsey) Kate Peterson turned 10 Monday, but was given a surprise meeting with a local celebrity on Sunday — Wayne the llama.

Kate Peterson was excited about her 10th birthday.

“Today’s actually my birthday,” Kate said on Monday. “But the party was yesterday, on Sunday.” Not only did her folks, Jacquie and Ricky Peterson, of Danville, throw her a dance party complete with friends, but she got to take a little ride out to a farm to meet a local celebrity.

“He tried to kiss me a couple of times …” Kate said. It was a little off-putting at first, but soon — the two were caught in a photo snuggling.

Wayne the llama is the star of the “Party On Wayne” calendars sold to benefit the Danville-Boyle County Humane Society, created by board president Fizzy Ramsey. Wayne resides on Ramsey’s parents’ farm, and was happy to greet Kate, a major admirer of his.

“It was the first time I’d met a llama,” Kate said. “I saw a picture of one before, and I just really liked the way they looked …” Peterson reached out to Ramsey to organize the surprise visit.

“It was love at first sight between those two …” Ramsey said.

Kate explains her fascination with llamas: “They are just really fluffy, and Wayne is so cute. They have a fluffy tail like a squirrel. Mix a squirrel and a horse and you have a llama.”

“She just loves all different kinds of animals; she’s really ‘artsy’ but I’m not sure exactly what got her into llamas — it’s been something she’s been into for several months. I had shown her a picture of Wayne on Facebook Fizzy had posted, and she went crazy over him,” Peterson said. “Then when the calendars came out for Christmas, we got her one and she was thrilled,” Peterson said.

“I’m a member of Rotary Club and the Humane Society was our capital project last year with the international dinner (annual fundraiser). Kate helped with the dinner too,” Peterson said.

After Kate received the calendar, she promptly hung it in her room. Peterson said she knew she had to arrange a meeting.

“I thought it’d be really cool if it was a special occasion, and wouldn’t it be a fun birthday surprise for her. I knew it would mean a lot. I was right. I contacted Fizzy, and she was all for it.”

So was Wayne, apparently …

“Wayne was ecstatic to meet a new friend,” Ramsey said. “He even got upset when his horse friend, Fran, tried to butt in for attention. It was another testament to how our four-legged friends bring joy to more people than they’ll ever know, and it’s fun to share the love.”

“Oh, she broke into the biggest grin and was so excited, and screamed ‘It’s Wayne!’ and ran over to him, asking if she could pet him,” Peterson said. “They were brushing him, and he gave her ’snuffies.’ She wasn’t sure about that at first, but she got comfortable with it and gave him a hug. That’s all she could talk about the rest of the night. That was the highlight of her birthday.”

“It was really funny,” Kate said through her giggles. “It seemed like Wayne really liked to get attention, and when Fran the horse started trying to push Wayne out of the way, Wayne just kind of looked at her like, ’She’s mine; this is my friend.’”

“Supporting the Humane Society is important to us. Kate has done a fundraiser for them before, when she was in daycare. She found a kitten one day and the Humane Society came and picked it up. So she did a drive to bring in some supplies,” Peterson said. Kate also goes with her mom to DBCHS to play with pups who need socializing.

Peterson said most of all, her daughter has a kind and caring heart and she wants that to continue.

“These animals are really sweet, and I know people are, like, allergic maybe, or some people just don’t like animals. But I think everyone should have a pet,” Kate said. “Because they make you feel better, and they can sense when you’re sad or upset. When I’m sad, I pet my cat and I feel better. I want everyone else to feel that way, too.”

“Party On Wayne” calendars are available for $10 at the Danville-Boyle County Humane Society, 778 N. Danville Bypass, for a limited time. All proceeds benefit the Humane Society. Anyone who can’t make it out to DBCHS can send a $12 PayPal payment to Ramsey.ky@gmail.com noting “Wayne Calendar” with their mailing address in the comments section.

Boyle jail population down, but some still housed in…