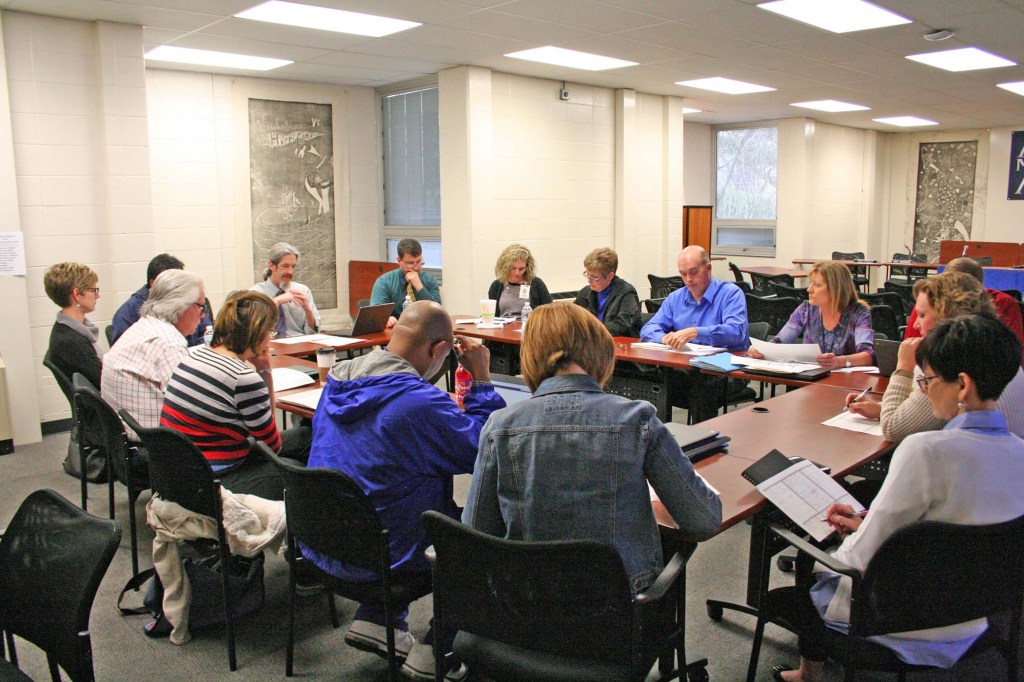 Kendra Peek/kendra.peek@amnews.com Danville Superintendent Keith Look addressed the Danville Board of Education, as well as district administration, during Monday's special-called board meeting regarding the 2017-2018 budget.

Editor’s note: The story headlined “Danville board discusses budget, staff allocations” that appeared on A1 of Tuesday’s Advocate-Messenger contained numerous errors and inaccuracies. A corrected version of this story appears below.

Adding funding for additional nursing was part of the discussion during Monday’s Danville Board of Education special meeting.

The meeting was called to discuss staffing priorities for the 2017-18 budget.

“I would like to argue that nurses are not a luxury, because I do think (they have) such a dramatic impact on students and staff,” said Keith Look, superintendent of Danville Independent Schools.

Currently, the district has one registered nurse (RN) who serves as the health services director. There’s one licensed practical nurse (LPN) on staff and an opening for a second LPN, District Finance Officer Paul Dean said.

The draft proposal for the 2017-18 budget includes suggested funding for the health services director and more nursing staff. Look and Dean gave an example that the district could pay five nurses for three hours a day. Dean explained that those don’t have to be five separate people — it could be any variation that equaled that amount of hours.

“You have to think about what you want,” Look said to the board.

When asked, district principals agreed the availability of nurses is “essential” and the current arrangement simply doesn’t offer enough time to the schools.

“My secretary and my attendance clerk are not nurses,” said Ron Ballard, Toliver Elementary principal. “They spend too much time doing that work.”

District Elementary Education Coordinator Judy Spellacy said the staff was also limited in what they were allowed to do, restricted to mostly “Band-Aids and water.”

Robin Kelly, principal of Jennie Rogers Elementary, said she would like it if, on the rare chances nurses would have free time, they could lead a lesson on prevention for students.

Nursing was one item on the wish list. Other budgetary concerns include covering the cost for health services classes at Danville High School. The high school has a plan worked out with Campbellsville University where the university provides an instructor and the high school provides a facility and covers the cost of setting up the class. That’s an additional expense, but it is less expensive than if the school also had to provide the teacher, Look said.

During a previous budget meeting, board members expressed a wish to ensure that Spanish was taught at all schools. The district has had some difficulty in finding qualified teachers, Look said, forcing some schools to turn those positions into other roles.

Board members asked the principals to lay out their “top” list for staffing needs:

• The technology resource teacher (TRT) at the school is also important. That position is currently funded by federal Title I dollars but if the local board chose to fund the position, it would free up federal funding for more interventionist help.

• The world language teacher is another important staff position to maintain. Kelly said that teacher sees 75-80 percent of the students at the school.

• An additional special education position would be helpful. “We are compliant, in that we meet our cap, but that doesn’t necessarily mean it’s best practice,” he said.

• The school’s intervention teacher position is important to maintain.

• He would like to have an English as a second language teacher. The school currently has a “solid” Spanish teacher that is fully funded by the board and there is a need to ensure that students who are not native English speakers are getting the help they need, too.

• Funding for the PASS program, including a person for the program, is a priority. That would enable students who are in need of behavior intervention to get help before it becomes a greater issue.

• The school would like to see an extra special education teacher. Currently, one is listed in the draft budget, but not guaranteed.

• Partial funding of an additional instructional coach and continued funding for Spanish classes is desired.

• It’s important to continue the technology resource teacher at the school. Ballard said that need has to be weighed against the need for an Interventionist, but he feels the greater need is the TRT.

• The technology resource teacher at Bate is funded by the school council. If the board chose to fund that position, it would free the school up to fund another block of reading or math or an intervention coach. “I hope my SBDM never decides to not fund that TRT,” she said.

• The school does not have an interventionist, but funding is being mentioned for one. Currently, the “core” teachers — math, science, reading, writing — each teach a section of intervention.

• The school only has one world language teacher, although funding is available for a second. The second was transformed into a reading and writing position because a qualified language teacher could not be found. One position is funded by the school council; the second by the board.

“The lack of any of these greatly affects students at the high school,” she said.

The school currently has a technology resource teacher and two teaching assistants. Both positions teach kids and have a “great impact” on students. “How do you prioritize that?” she asked.

Superintendent Look told the board they need to find a starting point.

“What’s the most important thing to us? I would like us to not be a Focus District anymore. I think that is a starting point to consider,” he said.

The Kentucky Department of Education identifies Focus Districts as ones where scores are low for “gap groups” — including minorities, students with disabilities, students who are eligible for free or reduced lunch and others.

Look also pointed out that Title I funds should not be considered as a guarantee.

“Title I is a grant. It should still always be looked at as a grant. We are very lucky that the feds fund it every year. It’s designed to supplement, not supplant — that’s the language they use,” he said.

It can’t be used to pay for teachers needed to meet cap requirements, he said, but can be used for additional staff if a school wanted smaller class sizes.

The board also has to consider the options of adding the family and consumer science pathway and the culinary pathway — both of which could benefit students in DHS and aid a partnership the school has established with neighboring schools with similar programs. Currently, students from the Danville High School can visit the Kentucky School for the Deaf to take classes that are part of their career pathways, if needed. With the addition, if it were approved, students from KSD could visit the high school to participate in those classes.

The school also has a partnership with Kentucky School for the Deaf, allowing their students to visit Danville High School to take a class if it is not offered at KSD, such as certain AP classes. Two students come from KSD take advantage of that opportunity, Ralston said.

“It’s been a lovely experience to have both kids from KSD. We need more of that,” said Ralston.

The board asked Look and Finance Officer Dean to compile the priority lists and include how positions are currently funded.

“These are a lot of big decisions,” board Chair Paige Matthews said.

The board has a working session on Monday and will revisit the proposed budget items at that time. Look said after the meeting that it is unlikely any decisions will be made this month.

A draft budget was approved in February. The final budget must be approved by August, however another draft will likely be voted on in the spring, Look said, so that schools can begin making their decisions to fill the allocations from the district.