Dr. James Lawrence Gibson, 81, died Monday, March 6, 2017, in Danville, Ky. Born August 10, 1935, he was the son of the late James Patrick and Lucille Case Gibson of Danville, Kentucky. He was a graduate of Danville High School, Centre College and earned his M.B.A. and his PH.D. in Business Administration from the University of Kentucky. 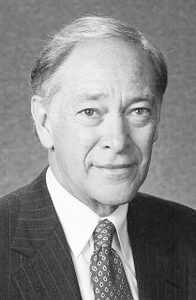 Jim began his teaching career as a Teaching Assistant, followed by an Instructor in Commerce at UK. He continued in the position of Assistant Professor of Business at the University of Texas, Arlington, then Centre College as both an Assistant and an Associate Professor. He returned to UK as an Associate Professor reaching a full professorship in 1972. Jim was awarded the Kincaid Professor of Management, serving until his retirement from teaching in 1997.

He also chaired the Departments of Business Administration and Management, served as Director of Graduate Studies and as Associate Dean for Academic Affairs.

Dr. Gibson, along with J.M. Ivancevich and J.H. Donnelly, co-authored eight text books in Business Management and contributed to three other textbooks during his writing career. These successful textbooks were issued in multiple editions. The most successful, “Organization: Behavior, Structure and Processes”, published in several editions and languages continuously for 40 years.

In recent years, Jim was inducted into the UK Alumni Hall of Fame, and honored by the Danville High School and Centre College Alumni Associations as a Distinguished Alumnus.

Jim enjoyed golf, fishing, scuba diving and travel. He was a veteran of the Kentucky National Guard, a member of the U.S. Navy League and sailed several times with the crews of U.S. Navy destroyers and frigates on sea duty. He was a member of The Presbyterian Church, Danville.

He was predeceased by his parents, a brother, Jason Carl “Jack” Gibson and his wife of 39 years, Dianne Richardson Gibson, who died in 1999.

A memorial service will be 11 a.m., Friday, March 10, 2017, at The Presbyterian Church. Rev. James Stewart will officiate. The family will receive friends in the Fellowship Hall following the service.

Memorial gifts are suggested to Heritage Hospice, The Presbyterian Church or Centre College.