Off and running: Titans roll to first round win 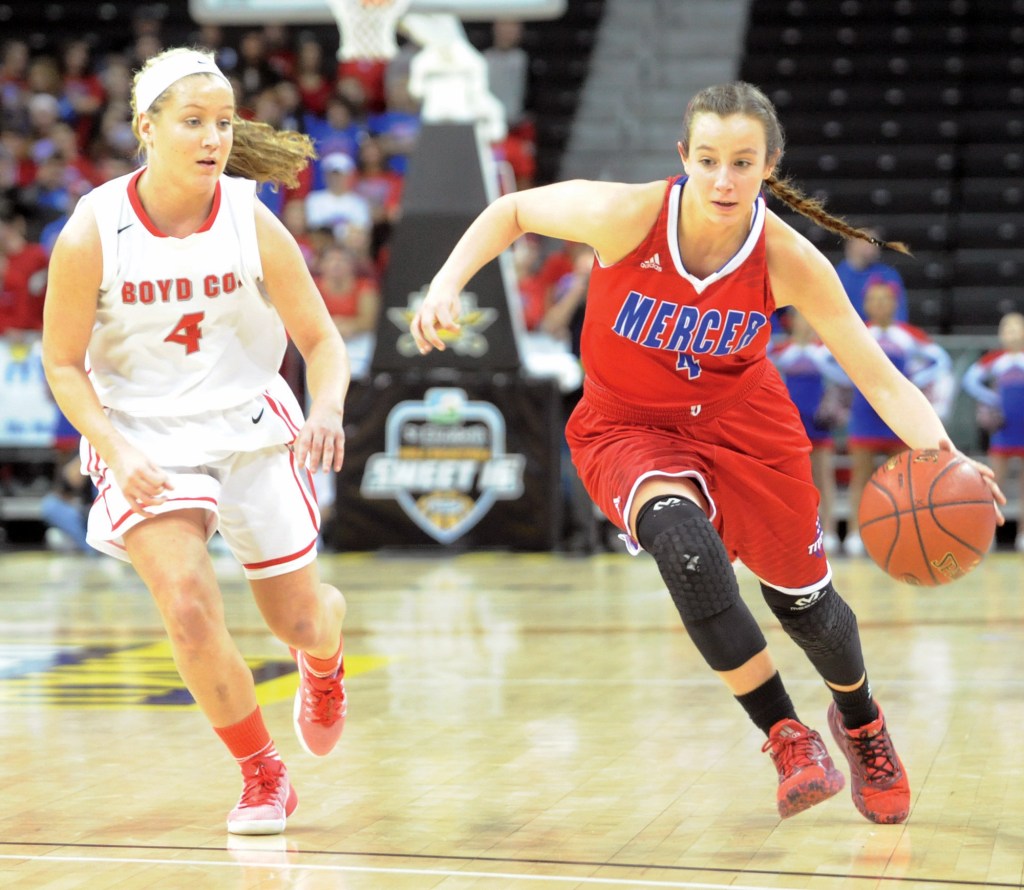 HIGHLAND HEIGHTS — Mercer County won big Wednesday at BB&T Arena in the first round of the girls’ Sweet 16 state tournament against Boyd County.

But it didn’t always look like an easy win.

Seygan Robins started to take over in the third quarter, scoring 16 of Mercer’s 19 points in the frame. She finished with a game-high 25 points to go with eight assists and five rebounds.

“Seygan is a special player,” Titans coach Chris Souder said. “The kids on our team really understand that. The ball was in her hands a lot, she makes things happen and she shot the ball extremely well. We go as Seygan goes, they understand that. She’s really matured as a leader, she’s starting to be more vocal. That’s just the kind of player she is.”

Robins led a record-setting performance from the Titans, hitting five of the team’s state tournament record 14 3-pointers. Mercer finished 14-for-28 from deep after going just 5-for-14 in the first half.

Souder said he grilled his team at halftime after a sluggish first half.

The challenge? Play for your predecessors and the program.

“I’ve been in this program for a long time, I’ve got two assistant coaches that have never had the chance to play in the Sweet 16,” Souder said. “My daughter didn’t get a chance to play in the Sweet 16. So we challenged them there to do it for the program. There’s a lot of people who didn’t get an opportunity to do this, so I was really proud with how we came out with a lot more energy and we were really engaged in what we were doing. I think when you do that, your shots fall a lot easier.”

Mercer’s shots definitely went down easier in the second half: The Titans were a robust 17-for-21 from the field in the final 16 minutes and 10-for-13 from deep.

“We’ve played on this court before, but we were shooting it about five feet behind the black line, the college line,” Souder said. “So everything was short and we were settling. We shot 15 3s in the first half, which is not uncharacteristic, but they were quick 3s. We wanted to attack a little bit more. We did much better in the second half, but that came from our energy and our defense.”

Coach Souder’s halftime speech was motivation, but the team knew it could play better and the coach knew they would respond. As good as the third quarter defense was for Mercer, the fourth-quarter offense might’ve been better. The Titans outscored Boyd 32-15 in the final eight minutes.

“On the defensive end, I had to go zone. I told them at halftime, ‘You all forced me to go zone,’ which I didn’t want to do,” coach Souder said. “We just said we’re going to go back to our full-court man-to-man, and at the beginning of the game, we were in full court man-to-man and they were getting behind us, we were getting lost, not talking. So we just challenged them.

It’s the second-straight year that Mercer has cruised in the first round of the state tournament after last season’s 68-39 victory over Leslie County.

Now, the Titans are focused on making it farther than last year’s Final Four appearance. They’ll face GRC, which beat Harlan, in the second round Friday at 1:30 p.m.