Pauline Brewer Lowe, 87, passed away Sunday March 5, 2017. She was born in Forkland on January 28, 1930, to the late John Hubert and Dewie Aldridge May Brewer. Pauline was the widow of Jack Lowe who passed away in 1976. 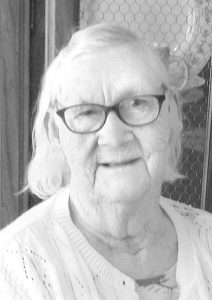 Pauline graduated from the Forkland High School and was a member of Sycamore Church of Christ. She enjoyed playing Rook and quilting, and taught several family members how to quilt. She always made the “best cakes ever” with homemade icing.

She was a hard worker her entire life and loved spending time with her family. She shared many hours playing with her grandchildren and great-grandchildren and it would not be unusual to see her playing ball or jumping on a trampoline.

In addition to her parents and husband, she was preceded in death by a son, Paul Wayne Lowe, and siblings, John H. Brewer, Jr., Ruby Clarkson, Mary White, D.C. May, Jr. and George May.

The funeral service will be 11 a.m., Thursday, March 9, 2017, at Walden Funeral Home Perryville (formerly Wilder Funeral Home) with burial to follow in Manse Cemetery in Paint Lick. Visitation will be Wednesday from 5-8 p.m. at the funeral home.

Pallbearers will be Johnny and Jimmy Lowe, Kevin Lewis, Josh Roberts, Greg Clarkson and Andy May.

Honorary bearers will be Jessica Roberts, Jeri Clarkson and all of Pauline’s great-grandchildren.

Memorial contributions are suggested to Hospice of the Bluegrass.