Raevonna Lynn (Floyd) Hall Poynter, 47, of Stanford, Kentucky, died Monday, March 6, 2017 at the Fort Logan Hospital. She was the wife of the late Robert Lee Poynter who preceded her in death on August 14, 2016. 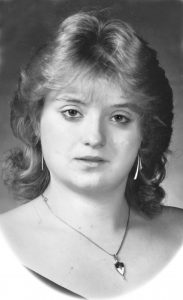 Raevonna was born September 1, 1969 in Boyle County to Ray and Phyllis (Taylor) Floyd. She was a well loved teacher at the Lincoln County High School where she had taught English for over 18 years. Raevonna had received her masters degree in teaching at EKU. She was a member of the Blue Lick Baptist Church.

Burial will in the Camp Nelson National Cemetery. Visitation will be from 3 p.m. until 7 p.m. on Wednesday, March 8 at the Blue Lick Baptist Church.

In lieu of flowers, memorial contributions can be made to WHAS – Crusade for Children at 520 W. Chestnut Street, Louisville, Ky 40202; or to the Lincoln County Relay for Life c/o Justin Poynter P.O. Box 366 Stanford, Ky 40484