STANFORD — Joye Hunt, who serves as a Senior Vice-President & Chief Financial Officer of PBK Bank, has been named to the Executive Committee of Friends of Traditional Banking. The national organization is an informal network of individuals who recognize the prominent and critical role of traditional banking in local communities and are committed to defending it from misguided laws and over-regulation.  Joye has served on the 50 State Advisory Board, now known as the Nationwide Banker Board for the past several years. 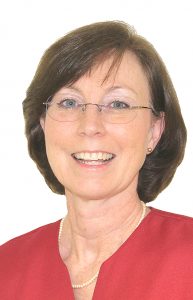 Joye has served PBK Bank in her current role since 2004, and is active in a wide variety of civic and educational organizations. She has served as treasurer of the Stanford Rotary Club since 2005 and serves as the chair for the Club’s Scholarship Committee, a position she has held for the past 10 years.

She and her husband, Joe Tamme, reside in Boyle County where they farm and raise cows. Members of St. Rose Catholic Church, they have one son, Ben Hunt, who is a student at the University of Kentucky.

“I am very honored to be asked to serve in this capacity to help preserve traditional community banking for ourselves, locally and nationally,” said Hunt. She also invites everyone to join and support Friends of Traditional Banking at www.friendsoftraditionalbanking.com to support community banks.

Janelle Wheeler, Executive Director of Heritage Hospice, Inc., has been named to serve a second term as a member of the National Hospice and Palliative Care Regulatory Committee. This committee closely monitors federal activity around hospice and palliative care issues and analyzes and interprets regulations put Into effect by Centers for Medicare and Medicaid Services (CMS), Office of Inspector General (01G), Medicare Payment Advisory Commission (MEDPAC), the Food and Drug Administration (FDA) and other federal agencies.

The committee works to predict the impact of these regulations, inform the hospice community of implementation requirements, and provide the education necessary for hospice providers to achieve and maintain compliance with all relevant regulations.

Wheeler attended a meeting of the committee in New Orleans earlier this year. “It is an honor to serve with some of the country’s leading hospice professionals in this capacity. Being selected to serve a second term is privilege and an opportunity to impact end of life care in a positive way.”

Heritage Hospice, Inc. is a nonprofit health care organization providing end of life care to patients and their families in Boyle, Garrard, Lincoln, and Mercers counties in Kentucky. For more information about hospice care, call (859) 236-2425.

Ephraim McDowell Regional Medical Center (EMRMC) is pleased to recognize and honor one of its nurses for her extraordinary patient care. Leah Holloway, R.N., a nurse in the Critical Care Unit, was one of many nurses nominated for the DAISY Award. A resident of Boyle County, Leah has been caring for patients at EMRMC for nearly four years. 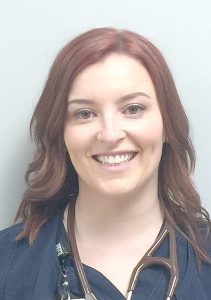 She was nominated by a patient’s family member who said, “Leah was my husband’s nurse after he suffered a massive heart attack and was unconscious in the Critical Care Unit.  Leah not only took medical care of my husband, but also met the emotional needs for me and my children. She showed such compassion to all of us during a very devastating time. Each question was answered and her fight to get us answers for the possible outcome was relentless. In the four days we were there, she became part of us as we went through the decisions to let go. I will forever be grateful for her decision to trade shifts, so she could see us through our final day with my husband. My family will never forget her and will always appreciate her kindness and compassion for us.”

Ephraim McDowell is proud to recognize nurses with the DAISY Award, a national program honoring the compassionate care and clinical excellence that nurses bring to their patients every day. Nomination forms for the DAISY Award are available at various locations throughout EMRMC and Ephraim McDowell Fort Logan Hospital.

FRANKFORT – Gov. Matt Bevin has appointed Amanda Holmes Rowland to the Kentucky Board of Veterinary Examiners.

Dr. Rowland, of Danville, is a veterinarian and will serve for a term expiring September 28, 2020. The Kentucky Board of Veterinary Examiners consists of eight members, all appointed by the governor. The board’s purpose is to regulate and control the licensing and conduct of veterinarians within the Commonwealth of Kentucky.

Farmers National Bank is pleased to announce its partnership with the Office of the Kentucky Attorney General to better protect valued clients from scams, frauds and con artists. In 2015, more than 3 million consumers in the United States were scammed out of $765 million, and reports suggest senior citizens lose nearly $37 billion annually to elder financial abuse.
Farmers National Bank is encouraging its customers to sign up for Scam Alerts, an automated text or email alert system from the Attorney General’s Office that provides real-time alerts on the newest scam appearing in our Commonwealth. To enroll, text the words KYOAG Scam to GOV311 (468311), or enroll online at ag.ky.gov/scams and select text message or email alert.
This free service is a great way to avoid falling victim to a scam.
Farmers National Bank, a community owned bank since 1879, has banking facilities in Danville, Burgin, Harrodsburg, Junction City, Lancaster, Perryville and Stanford.

Jonathan Rooney, of Stanford, was selected as “Employee of the Month” for February 2017 at Northpoint Training Center. Rooney began his employment at NTC in November 2013 as a correctional officer. He was promoted to classification and treatment officer in February 2015. Rooney was selected as Employee of the Month based on his outstanding job performance. He received a letter of commendation and was assigned a reserved parking space for the month.

The following people were promoted at Northpoint Training Center on March 1, 2017:

• Keith Schneider, of Lancaster, was promoted to correctional lieutenant. Schneider began his employment at NTC as a correctional officer in January 2015.

• Terrance Asmond, of Brodhead, was promoted to corrections recreation leade. Asmond began his employment at NTC as a correctional officer in June 2016.

• John Mattingly, of Harrodsburg, was promoted to correctional sergeant. Mattingly began his employment at NTC as a correctional officer in October 2007.

• Krysta Nevels, of Somerset, was promoted to administrative specialist II. Nevels began her employment at NTC as a correctional officer in January 2015.

• Jordan Roberts, of Bronston, was promoted to mechanical maintenance and operations technician III. Roberts began his employment at NTC as a correctional officer in March 2016.

Matthew Ellis of Danville was recognized by his employer with the distinguished “Winner’s Circle” award for exceeding sales goals for the 2016 fiscal year. Ellis is a District Manager for Woods Equipment and has been a sales team member since 2006. The award was announced in January. Visit www.woodsequipment.com for more information.