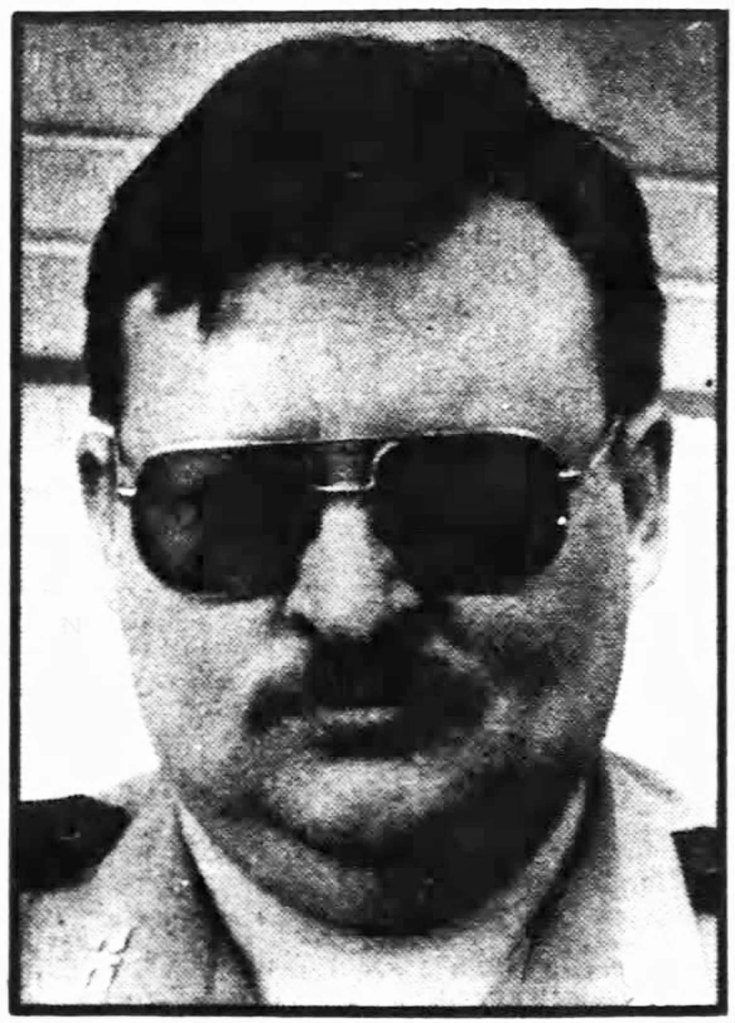 File Photo A photo of Vernon Withers from the Feb. 17, 1987, issue of The Advocate-Messenger.

Vernon Withers, a man who dedicated many years of his life to serving as the police chief of Perryville, passed away on Saturday.

“He was perfect for Perryville,” said Tony Perkins, friend of Withers. “He would rather help you than lock you up. For a small town, that was beneficial.

“And Vernon was quick, if he realized he couldn’t handle it, to call for help.”

Sometimes that help came from Perkins, who worked as a Kentucky State Police trooper while Withers served as Perryville’s police chief.

“We got to know each other pretty well,” Perkins said.

Perkins shared a story about working to catch a man he suspected of planning a bank robbery on the Farmer’s National Bank in Perryville. They later learned the man, who was from Berea, had recently been released from prison for bank robbery. While determining how to proceed, the man saw Withers and got spooked, attempting to run away, knocking Withers down in the process.

Perkins pursued on foot, following the man behind the Perryville Baptist Church, which was in the process of constructing its education center at the time. He was navigating through the construction, when someone alerted him that Withers had captured the guy.

“I came around the corner and there was Vernon … he had him in the backseat. I asked him how he did it and Vernon said, ‘I told him to get in the car,’” Perkins said, laughing. “I wondered why I didn’t try that.”

“Vernon was always there when you called him,” he said.

Mike Wilder, former owner of Wilder’s Funeral Home in Perryville, said one of the things he liked about Withers was that “he was the same everyday.”

“He never missed leading a funeral. I never had to call him — he would find out when a funeral was and be waiting,” Wilder said. “That sticks out. He was so dependable.”

Like Perkins, Wilder said Withers “was the perfect police officer for Perryville. He was an asset to Perryville.”

It was around the same time that Withers became the chief in Perryville that he and his wife, Helen, learned they were expecting their son, Jonathan.

“They were excited,” Perkins said.

Perkins, Withers, Tony Young and another local trooper, Monty Owens, all had children of similar ages and would get together once a week or so at Perryville Battlefield when their kids were young.

“We did that for about three or four years,” Perkins said.

Later, Withers’ wife became sick with cancer. The two had separated for a time, but she returned home to live with Withers, who cared for her until her death in July 2000.

That same year, he cared for his mother Montie Luttrell Withers until her death in September 2000.

Perkins said Withers had a framed picture of John Wayne hanging in his house and told his mom she had to salute the photo whenever she passed.

“So, she saluted John Wayne,” he said, smiling.

Withers had bought a team of horses — Mike and Molly — that were “good horses,” which he used to plow the garden that he and Perkins worked together, Perkins said.

“We bummed a garden spot together,” Perkins said. “He would get on the disc, behind the plow, and the horses couldn’t pull him and the equipment — when Vernon did something, it was all or nothing. He would set the disc as deep as it would go … they couldn’t pull it.”

They figured out where to set the disc, and Withers would continue riding it, Perkins said.

“I was scared to death to ride behind the horses … He liked to work it,” Perkins said. “Of course, he was born 100 years too late.”

After the death of his wife, Withers remarried twice. For one of the weddings, Perkins was the best man.

“I was in the garden one day and he comes out, standing around — I knew he wanted something. He said, ‘What are you doing Saturday?’ I said, ‘What do you want to do on Saturday?’”

Withers asked him to meet him at a house, and offered up no other information about it.

“I had already heard they were getting married. I said, ‘Well, yeah, do I need to bring any tools or anything?’ ‘No.’ ‘Do I need to dress up?’ ‘No.,’” Perkins said. “So we show up, and this preacher is a truck driver — I’m not sure how he and Vernon got together — and their basement was set up for a wedding. Vernon’s there, and he’s dressed up — I’ve never seen him in a nice shirt and pants. I go sit in the back row.

“She shows up and Vernon goes up there — he looks back and goes, ‘Tony, come up here.’ I was supposed to be the best man,” he starts laughing, “He never asked, he never said a word about it. That was Vernon. He knew he didn’t have to ask, that I’d do it … that was him with about everything.”

Withers also had a knack for buying and selling.

He shared how Withers bought a car off “some guy” he met in Mercer County, and later a “beautiful truck” off another person he met.

One time, Perkins and Withers planned a fishing trip, taking a “little tin boat” that Perkins had. They made it to Cedar Creek Lake and after hitting a few spots with no luck, Withers was ready to come back, so they started back in.

As they were heading back to the dock, they met the wake off another boat and, due to the weight of the grown men and their stuff, started taking on water.

“I cut the motor. Vernon stands up, and I start yelling at him to sit down,” Perkins said, laughing. “I made sure I was yelling loud enough that other boats could hear us, because I was sure they were going to be picking us up.”

He told Withers to grab a minnow bucket and start bailing.

“He starts using his boot! I look at him and he’s laughing. Then I think to ask him if he can swim — not a lick.”

There’s a million stories to share, Perkins said — like the time they tried to grow corn to sell. While some of the five pounds of seed grew to crop in the spaces they “bummed,” a lot didn’t.

And there’s the story of them hunting ginseng while they were hunting for “dope” on duty, although neither man knew what ginseng looked like.

“He said, you’ll know it when you see it,” Perkins said with a smile.

In his later years, Withers found his way to church and God, Perkins said.

“He started going to Bluegrass Pike Baptist Church … He didn’t tell me until after, but he got baptized. Then I remembered they didn’t have a baptism pool (at the time), so I asked him how they did it,” Perkins said.

They had gotten a water tank to baptize people in, he said, and even though it was a cool day, Withers was “proud as a pumpkin” for getting baptized, Perkins said.

Withers built a cabin in Perryville, and would burn firewood, and raise chickens and ducks. He was a collector, and especially liked collecting iron cookware, Perkins said.

“He wouldn’t let you cook with them,” he said, smiling. Perkins once found a recipe for an apple pie in a dutch oven, and convinced Withers to let him use one of his. “He followed that dutch oven and watched me the whole time … (That apple pie) didn’t turn out quite right.”

Withers and Perkins continued working a garden together for many years.

“Vernon was big on planting … He ate very little out of the garden. But he liked giving it away,” Perkins said.

Withers liked doing other things for people, things you’d never know about, Perkins said. He found out a boy in Perryville needed books for school and couldn’t afford them, so he bought the books. He’d find stray dogs and drive them around until he found homes for them.

“He never kept any of them,” Perkins said.

Withers spent his life in public service. He served in the United States Army during the Vietnam War, worked at the Harrodsburg Police Department, and as a deputy jailer at the Boyle County Detention Center. But he really enjoyed his time as the police chief of Perryville, and it suited him, Perkins said.